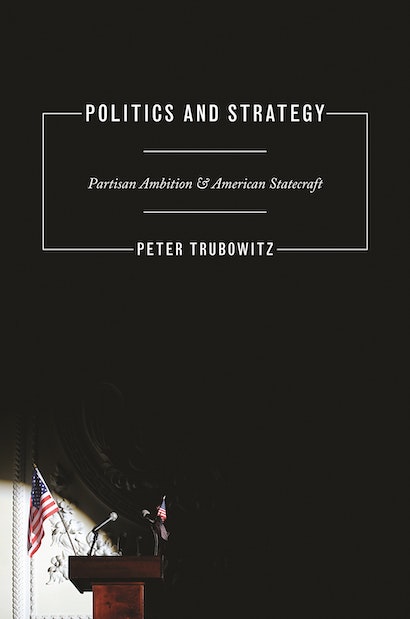 Why do some national leaders pursue ambitious grand strategies and adventuresome foreign policies while others do not? When do leaders boldly confront foreign threats and when are they less assertive? Politics and Strategy shows that grand strategies are Janus-faced: their formulation has as much to do with a leader’s ability to govern at home as it does with maintaining the nation’s security abroad. Drawing on the American political experience, Peter Trubowitz reveals how variations in domestic party politics and international power have led presidents from George Washington to Barack Obama to pursue strategies that differ widely in international ambition and cost. He considers why some presidents overreach in foreign affairs while others fail to do enough.


Trubowitz pushes the understanding of grand strategy beyond traditional approaches that stress only international forces or domestic interests. He provides insights into how past leaders responded to cross-pressures between geopolitics and party politics, and how similar issues continue to bedevil American statecraft today. He suggests that the trade-offs shaping American leaders’ foreign policy choices are not unique — analogous trade-offs confront Chinese and Russian leaders as well.


Combining innovative theory and historical analysis, Politics and Strategy answers classic questions of statecraft and offers new ideas for thinking about grand strategies and the leaders who make them.

Peter Trubowitz is professor of government at the University of Texas, Austin. He is the author of Defining the National Interest.

"Trubowitz has written an impressive book with a modest thesis. He makes the case that both the distribution of power around the world and domestic politics influence strategic decisions in U.S. foreign policy. . . . Trubowitz captures the complexity of these decisions with theoretical sophistication, an unusual breadth of historical examples, and an impressive clarity of argument. This is an important book."—Choice

"Scholars of American politics and international relations alike will find a strong theoretical foundation along with extensive empirical material in this work for exploring such topics."—Meena Bose, Political Science Quarterly

"Politics and Strategy is the best book on U.S. grand strategy to emerge in years. Trubowitz provides a simple and elegant model that accounts for U.S. strategic choices over centuries. Going beyond the tired isolationist-internationalist dichotomy, this book establishes a far more interesting and complex pattern of variation of U.S. grand strategies, exposing unexpected commonalities between the strategic aims of such unlikely bedfellows as Washington and Franklin Roosevelt, McKinley and G. W. Bush, or Hoover and Clinton. This is a signal contribution to scholarship with major implications for policy debates."—William Wohlforth, Dartmouth College

"Politics and Strategy is vintage Trubowitz. Large in intellectual ambition and empirical scope, elegantly sparse in theoretical formulation, and compelling in the evidence it presents, this book offers a deeply illuminating causal narrative of American foreign policy. The book's grasp of international relations theory is lucid, its in-depth engagement of American domestic politics is exemplary, and its practical policy implications are important. This book shines a brilliantly clear light on a subject too often shrouded in the depressing fog dispensed by pundits and blogs."—Peter Katzenstein, Cornell University

"Trubowitz places grand strategy at the critical intersection of political economy and security, where it belongs. His book is both a major addition to the positive theory of grand strategy and a novel reinterpretation of the history of American foreign policy."—Miles Kahler, University of California, San Diego

"Politics and Strategy is a great book. It offers a big-think synthesis of the two leading categories of theories assessing foreign policy: realism and domestic politics. It then applies that synthesis in a provocative, interesting, and plausible fashion to the history of U.S. foreign policy. Trubowitz does a superb job conceptualizing and defining grand strategies and his argument is compelling, elegant, and novel."—Jeffrey W. Legro, University of Virginia