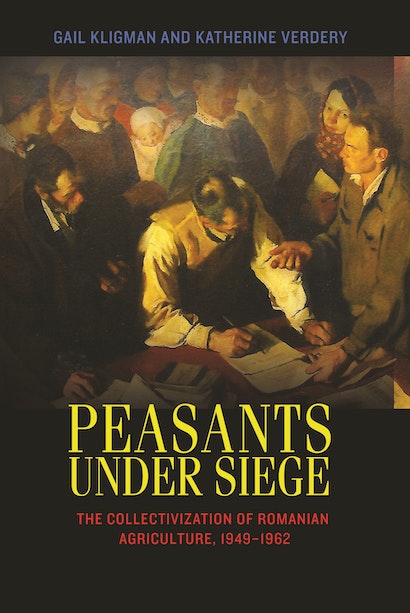 In 1949, Romania’s fledgling communist regime unleashed a radical and brutal campaign to collectivize agriculture in this largely agrarian country, following the Soviet model. Peasants under Siege provides the first comprehensive look at the far-reaching social engineering process that ensued. Gail Kligman and Katherine Verdery examine how collectivization assaulted the very foundations of rural life, transforming village communities that were organized around kinship and status hierarchies into segments of large bureaucratic organizations, forged by the language of “class warfare” yet saturated with vindictive personal struggles.


Collectivization not only overturned property relations, the authors argue, but was crucial in creating the Party-state that emerged, its mechanisms of rule, and the “new persons” that were its subjects. The book explores how ill-prepared cadres, themselves unconvinced of collectivization’s promises, implemented technologies and pedagogies imported from the Soviet Union through actions that contributed to the excessive use of force, which Party leaders were often unable to control. In addition, the authors show how local responses to the Party’s initiatives compelled the regime to modify its plans and negotiate outcomes.


Drawing on archival documents, oral histories, and ethnographic data, Peasants under Siege sheds new light on collectivization in the Soviet era and on the complex tensions underlying and constraining political authority.

Gail Kligman is professor of sociology and director of the Center for European and Eurasian Studies at the University of California, Los Angeles. Katherine Verdery is the Julien J. Studley Faculty Scholar and Distinguished Professor of Anthropology at the City University of New York Graduate Center.

"Two senior scholars have written a seminal work on the creation of collective agriculture in Romania. . . . Methodologically sound, the analysis relies on, synthesizes, and draws upon the authors' own studies as well as those of 19 collaborators who studied villages and communes throughout Romania between 1998 and 2004. . . . Their theoretical conceptualization, especially the dissection of property transformation as a cultural, social, and political process at the village level, places this among the best studies of state socialism as well as peasant resistance."—Choice

"This book is the fruit of a ten-year project undertaken by two premier social anthropologists working with an international, interdisciplinary team of 19 scholars. . . . The results, as the authors richly document, turned out to be far more convoluted, ironic, and layered than histories to this point have suggested. The bricks and mortar of their study are massive data they assembled, generated from multiple, diverse sources. But the book's depth results from its thoughtful reflections on the fundamental relationships among people, property, and the state. It offers a model of how histories of this period in Eastern Europe should treat the intricacies of cause and effect, authoritarian design and bureaucratic muddling, and political power and the power of tradition."—Foreign Affairs

"Their book sets a high bar for future collectivization studies . . . because of the book's innovative and effective approach. . . . Kligman and Verdery are correct to restrict their understanding of this period to the representation of their interviewees' opinions and recollections as well as to their own learned interpretations of Romanian archives and collectivization scholarship. Their efforts result in a tremendous contribution to our knowledge of collectivization in the 20th century."—Russell Zanca, American Journal of Sociology

"[T]hrough its treatment of pedagogies of persuasion, exploration of cadre identities and practices, systematic analysis of the class struggle campaign, and breadth of the data used, Peasants under Siege stands as an important contribution to the analysis of socialism and collectivization in Romania, as well as throughout the former east Europe."—David A. Kideckel, Slavic Review

"Scholars from a wide range of research areas and disciplines will cherish this book, but obviously those, who focus on Romania, the Balkans and communism will find it most valuable. Undoubtedly through the abundance of material gathered and analysed in the book, the interdisciplinary approach and the innovative methodology applied by Gail Gligman and Katherine Verdery make this work not only a powerful intellectual achievement, but indeed a landmark in the field of studies on communist regimes in Europe."—Rigels Halili, Anthropological Notebooks

"Peasants under Siege is the most nuanced and multifaceted analysis of this topic to date. It will become an instant classic in East European studies. Kligman and Verdery never take the easy way out or smooth over complexity. Their empirical account of Romanian collectivization offers unparalleled detail about the lived realities of village life in early state socialism. This book was a pleasure to read."—Lynne Haney, New York University

"This is the most comprehensive, theoretically sophisticated, and penetrating work on the collectivization of agriculture in Romania available in any language. The authors cover collectivization from every important angle and with much originality, and they provide a broad framework from which to judge the causes behind collectivization and the methods used to carry it out. I read this book with much profit and pleasure."—Keith Hitchins, University of Illinois, Urbana-Champaign