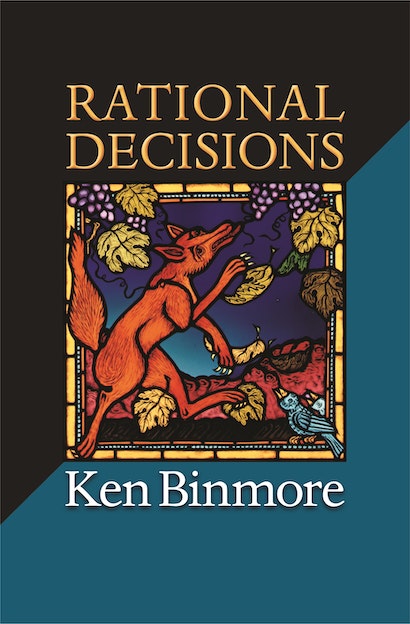 
The book is a wide-ranging exploration of standard theories of choice and belief under risk and uncertainty. Ken Binmore discusses the various philosophical attitudes related to the nature of probability and offers resolutions to paradoxes believed to hinder further progress. In arguing that the Bayesian approach to knowledge is inadequate in a large world, Binmore proposes an extension to Bayesian decision theory — allowing the idea of a mixed strategy in game theory to be expanded to a larger set of what Binmore refers to as “muddled” strategies.


Written by one of the world’s leading game theorists, Rational Decisions is the touchstone for anyone needing a concise, accessible, and expert view on Bayesian decision making.

Ken Binmore is a mathematician turned economist and philosopher. He has held chairs at the London School of Economics and Political Science as well as other universities, and is professor emeritus of economics at University College London. His recent books include Natural Justice, Does Game Theory Work?, and A Very Short Introduction to Game Theory.

"This short, ambitious book is intended to appeal to the presumed curiosity of economists, statisticians, and philosophers as to what constitutes rationality in scientific induction. Binmore, a game theorist aware of the daunting complexity of his subject matter for nonspecialists, has gone to great pains in making his work accessible, even offering marginal symbols to indicate the substantial portions of the text best avoided by readers lacking the author's appetite for mathematical data."—Choice

"Rational Decisions contains a wealth of stimulating arguments and thought-provoking claims. It would be an excellent text for an advanced seminar in decision theory, particularly for students with a solid technical background. And no economist, philosopher or political scientist seriously interested in theories of rational decision-making can afford to ignore Binmore's controversial and iconoclastic claims."—José Luis Bermúdez, Economics and Philosophy

"It is an original and stimulating book. I enjoyed it very much, and expect that you may too."—Brian Skyrms, British Journal for Philosophy of Science

"Ken Binmore is one of our deepest thinkers on the foundations of economics and game theory. Here he gives us his personal take on standard decision theory and his own extension of the theory to the case in which decision makers cannot assign unambiguous probabilities to future events. This book will be of considerable interest to economists and philosophers alike."—Eric Maskin, Nobel Prize-winning economist

"Strong on ideas and opinions but low on jargon, this is one of the most lively discussions of the strengths and limitations of the Bayesian approach to decision making that I have ever come across. Clearly and strongly argued, controversial, and a pleasure to read."—Riccardo Rebonato, author of The Plight of the Fortune Tellers

"Ken Binmore's new book on rational decisions is a superb up-to-date introduction to the now large and complex literature of this subject. The touch is light, but the examples and theorems are precise. The references are more than ample to lead the reader to more details on those parts of the subject that are of most interest. Although the author is an economist, the content will appeal to philosophers, psychologists, and statisticians as well."—Patrick Suppes, Stanford University

"Well-written, with many nice illustrative examples, this book contributes to the ongoing debate on whether the Bayesian method is the proper normative framework for making decisions and updating beliefs. The book is extremely impressive in its breadth of cited references: historical, mathematical, philosophical, and statistical."—Mark Machina, University of California, San Diego

"This book takes the reader from the very beginnings of decision theory through innovative new work, and it is written concisely and clearly enough to make the journey seem effortless. It will be essential reading for decision theorists and economists in general, whether new to the field or old hands."—Larry Samuelson, Yale University