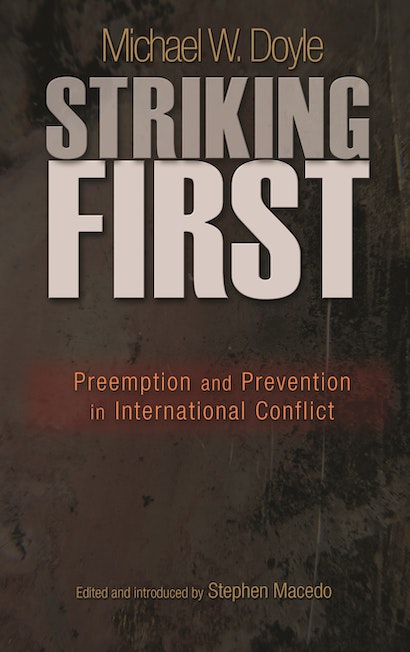 Does the United States have the right to defend itself by striking first, or must it wait until an attack is in progress? Is the Bush Doctrine of aggressive preventive action a justified and legal recourse against threats posed by terrorists and rogue states? Tackling one of the most controversial policy issues of the post-September 11 world, Michael Doyle argues that neither the Bush Doctrine nor customary international law is capable of adequately responding to the pressing security threats of our times.


In Striking First, Doyle shows how the Bush Doctrine has consistently disregarded a vital distinction in international law between acts of preemption in the face of imminent threats and those of prevention in the face of the growing offensive capability of an enemy. Taking a close look at the Iraq war, the 1998 attack against al Qaeda in Afghanistan, and the Cuban Missile Crisis, among other conflicts, he contends that international law must rely more completely on United Nations Charter procedures and develop clearer standards for dealing with lethal but not immediate threats.


After explaining how the UN can again play an important role in enforcing international law and strengthening international guidelines for responding to threats, he describes the rare circumstances when unilateral action is indeed necessary. Based on the 2006 Tanner Lectures at Princeton University, Striking First includes responses by distinguished political theorists Richard Tuck and Jeffrey McMahan and international law scholar Harold Koh, yielding a lively debate that will redefine how — and for what reasons — tomorrow’s wars are fought.

Michael W. Doyle is the Harold Brown Professor of International Affairs, Law, and Political Science at Columbia University. He served as assistant secretary-general and special adviser to U.N. Secretary-General Kofi Annan, and is currently the chair of the U.N. Democracy Fund. His books include Making War and Building Peace (Princeton) and Ways of War and Peace.

"The arguments presented are lucid, earnest, and thoughtful. Accepting that preemption might be necessary, Doyle builds on the traditional criteria to stress the importance of the lethality and likelihood of the threat and the legitimacy and legality of the response."—Lawrence D. Freedman, Foreign Affairs

"[Doyle] points out...the Bush doctrine is not only dangerously 'subjective' and 'open-ended' but also an 'invitation to chaos' because other states may claim the right to invoke it for their own purposes...Instead of embracing the Bush administration's radical alternative, however, Doyle calls for updating the doctrine of preemption without collapsing it into prevention."—William A. Galston, American Prospect

"Striking First, which reflects both the knowledge of a distinguished scholar and the experience and judgment of a practitioner (Doyle was UN assistant secretary-general under Kofi Annan), is an indispensable book for those interested in the question of the justifiability of preventive action against future threats. Given the omnipresence of those threats, that should include all of us. Doyle's careful reasoning and balanced judgments also make this enormously thought-provoking book perfect for the classroom."—Jack S. Levy, Perspectives on Politics

"Doyle's book is relatively short but it contains substantial power and a tremendous amount of food for thought. It leads the reader into his/her own debate on the merits of the Bush Doctrine and how the world may be fundamentally altered by it, for better or for worse."—Steve Dobransky, International Journal on World Peace

"A big subject is starkly caught in Michael Doyle's bright headlights. The remedies he proposes are among the most sensible on offer. Cleverly, the author engages in dialogue with other leading thinkers, putting his ideas to a coherent test. This book journeys into the heart of unilateralism and emerges with a plausible theory."—Thomas M. Franck, New York University School of Law

"The arguments about whether or when to strike first are passionate, dangerous, and critically necessary. Michael Doyle brings to these arguments a calm voice, vast knowledge, practical experience, and political wisdom. His book is indispensable."—Michael Walzer, Institute for Advanced Study

"Michael Doyle is one of the most lucid analysts of international relations writing today. In Striking First he provides the best account that has yet been developed of the conditions under which preemptive action against threats to American national security can be justified, and of the form such action must take if it is to garner legitimacy at home and abroad. As the commentaries from other major figures included with the text indicate, not everyone will agree with Doyle's view. But they also make it clear that Doyle's is the case to answer. At a time when preemptive action is easily dismissed because of its abuse by the Bush administration in Iraq, this is a major achievement."—Ian Shapiro, author of Containment

"Anyone who wants to understand the issues involved in the authorization of preventive war should read Striking First. Michael Doyle argues convincingly that although authorization by the United Nations Security Council is highly desirable, standards are also needed for determining when to act without its approval. The debate between Professor Doyle and Dean Harold H. Koh strikingly illuminates the differences between an essentially political and a legalist approach to this question."—Robert O. Keohane, Princeton University

"This is a serious attempt to grapple with a very important problem. Doyle has thought deeply about one of the most central problems in foreign policy today."—Marc Trachtenberg, author of The Craft of International History

"Superb and important. The writing is clear and forceful, the tone evenhanded and judicious, the scholarship excellent. The topic could not be more important in the wake of the Iraq invasion and the possibility of a preventive self-defense attack on Iran."—David Luban, author of Legal Ethics and Human Dignity