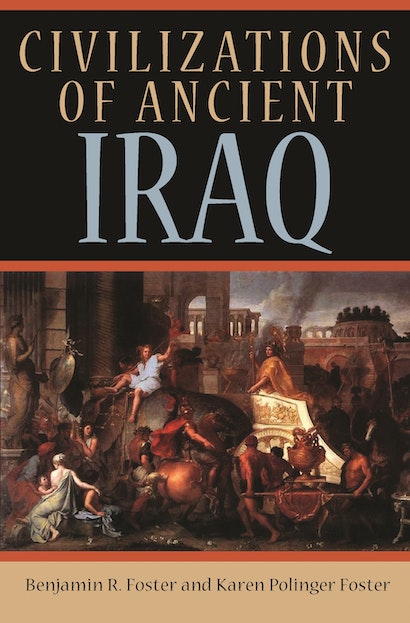 In Civilizations of Ancient Iraq, Benjamin and Karen Foster tell the fascinating story of ancient Mesopotamia from the earliest settlements ten thousand years ago to the Arab conquest in the seventh century. Accessible and concise, this is the most up-to-date and authoritative book on the subject. With illustrations of important works of art and architecture in every chapter, the narrative traces the rise and fall of successive civilizations and peoples in Iraq over the course of millennia — from the Sumerians, Babylonians, and Assyrians to the Persians, Seleucids, Parthians, and Sassanians.

Ancient Iraq was home to remarkable achievements. One of the birthplaces of civilization, it saw the world’s earliest cities and empires, writing and literature, science and mathematics, monumental art, and innumerable other innovations. Civilizations of Ancient Iraq gives special attention to these milestones, as well as to political, social, and economic history. And because archaeology is the source of almost everything we know about ancient Iraq, the book includes an epilogue on the discovery and fate of its antiquities. Compelling and timely, Civilizations of Ancient Iraq is an essential guide to understanding Mesopotamia’s central role in the development of human culture.

Benjamin R. Foster is the Laffan Professor of Assyriology and Babylonian Literature and curator of the Babylonian Collection at Yale University. Karen Polinger Foster is a lecturer in ancient Near Eastern and Aegean art at Yale.

"Benjamin Foster and Karen Polinger Foster, both at Yale University, have written an excellent overview of the history and cultures of ancient Iraq beginning with the earliest references to Sumer and ending with the Arab defeat of the Sassanians in 637 CE. . . . The text is clear, well written and a pleasure to read. It should be highly recommended to anyone, student and layman alike, as an introduction to the history of ancient Iraq. Perhaps most importantly the book seems to have been designed for an audience that wishes to know more about ancient Iraq as a consequence of recent and current events. . . . This book is for bookshops, on the high street and at airports, as well as for students and for scholars for whom ancient Iraq or contemporary attitudes to the civilization of ancient Iraq might be tangential."—Geoffrey D. Summers, Bryn Mawr Classical Review

"It's an undeniable benefit to have Civilizations of Ancient Iraq (note the plural), . . . [a] crystal-clear and well-illustrated narrative ranging from the earliest villages (c. 8000 BCE) to the Arab conquest of 637 CE. . . . This is a most rewarding book with fine illustrations and a challenging bibliography."—Peter Skinner, ForeWord Magazine

"A very readable overview of the importance of Iraq in its own terms and in the larger context of the forces that have shaped modern civilisation. Here are chapters on the creation of the first cities ever constructed, of the first examples of writing, of the great King Hammurabi of Babylon and humanity's first poetic utterance in the Epic of Gilgamesh. Here is a story of great scientific achievement, of the powerful Assyrian Empire, of the Hanging Gardens of Babylon, of Sennacherib and his transformation of Nineveh into a city of aqueducts, canals, dams and, most impressively, of the invention of the device now known as the Archimedes screw. It is a story of an ancient and extraordinary civilisation that in recent times has been buried under acts of brutality and violence."—Bruce Elder, Sydney Morning Herald

"[I]t can be extremely useful to have a single account of Mesopotamia's history reduced to its salient points, in order to provide a focused framework onto which the more complex details of history and culture can be placed. Civilizations of Ancient Iraq achieves this with ease, and emerges with a huge amount of appeal for a diverse audience."—Elizabeth Wheat and Erika D. Johnson, Rosetta

"The narrative is ingeniously constructed, covering broad sweeps of history in a few lines, then settling on a person or issue of interest in more depth. The reader is not overwhelmed with the mass of details and names that could have been included, but instead is drawn into some telling particulars that hint at the complexity of the whole."—Amanda H. Podany, Journal of the American Oriental Society

"[This] is an excellent survey of a civilization that is unfamiliar to most general readers, and a lament for all that is being forever lost through looting and destruction. One hopes the book will make an impression not just on those interested in ancient history but also on policy makers who have authority over sites and museums in Iraq and over preventing the trade in smuggled objects from the ancient sites."—Amanda H. Podany, Journal of the American Oriental Society

"It is certainly to be hoped that this book opens the eyes of readers in the West, who may have had little awareness of Mesopotamia's great contributions to human civilization, of just what a legacy Iraq is trying to safeguard, and just how costly the events of the past ten years have been to the heritage shared by us all."—D.T. Potts, Ancient West and East

"Civilizations of Ancient Iraq is an elegantly engaging account of cultural and political history around the Tigris and Euphrates rivers from the first human settlements to the coming of Islam. Equally importantly the authors describe the rediscovery of Mesopotamia beginning in the mid-nineteenth century and highlight the dire state of Iraqi heritage today. They deftly interweave quotations from Babylonian and Sumerian literature with the latest archaeological and historical research to bring their narrative to life."—Eleanor Robson, author of Mathematics in Ancient Iraq: A Social History

"With its penetrating asides about Iraq's archaeological history and the recent fate of its antiquities, this introduction to the country's ancient history will be a revelation to general readers. Iraqi history has not been covered before with this concision or with this concern for the history of archaeology and how the archaeological record has been affected by the country's current conditions. Civilizations of Ancient Iraq is written with flair."—Daniel C. Snell, author of Life in the Ancient Near East

"Original and unique, this ambitious grand survey provides a refreshing history of ancient Iraq in its entirety in one brief and accessible volume. Considering the current crisis in Iraq, and especially the catastrophe facing its ancient heritage, general readers should find this book interesting. It should also inspire students and scholars to approach the history of ancient Iraq as a whole rather than a set of fragments."—Marc Van De Mieroop, author of King Hammurabi of Babylon: A Biography