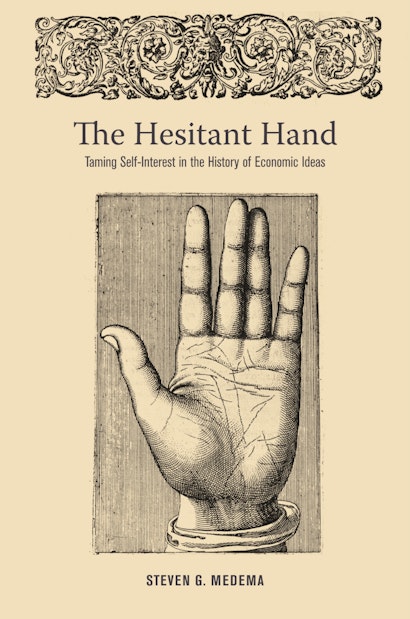 Adam Smith turned economic theory on its head in 1776 when he declared that the pursuit of self-interest mediated by the market itself — not by government — led, via an invisible hand, to the greatest possible welfare for society as a whole. The Hesitant Hand examines how subsequent economic thinkers have challenged or reaffirmed Smith’s doctrine, some contending that society needs government to intervene on its behalf when the marketplace falters, others arguing that government interference ultimately benefits neither the market nor society.


Steven Medema explores what has been perhaps the central controversy in modern economics from Smith to today. He traces the theory of market failure from the 1840s through the 1950s and subsequent attacks on this view by the Chicago and Virginia schools. Medema follows the debate from John Stuart Mill through the Cambridge welfare tradition of Henry Sidgwick, Alfred Marshall, and A. C. Pigou, and looks at Ronald Coase’s challenge to the Cambridge approach and the rise of critiques affirming Smith’s doctrine anew. He shows how, following the marginal revolution, neoclassical economists, like the preclassical theorists before Smith, believed government can mitigate the adverse consequences of self-interested behavior, yet how the backlash against this view, led by the Chicago and Virginia schools, demonstrated that self-interest can also impact government, leaving society with a choice among imperfect alternatives.

The Hesitant Hand demonstrates how government’s economic role continues to be bound up in questions about the effects of self-interest on the greater good.

Steven G. Medema is professor of economics at the University of Colorado Denver. His many books include Economics and the Law: From Posner to Post-Modernism and Beyond (Princeton).

"Adam Smith's 'invisible hand' and the notion that self-interest can be best tamed by market interaction have been the center of policy disputes since the late 18th century. . . . Medema chronicles the linkages between the debates of Smith's time and those of today. . . . Highly recommended."—R. B. Emmett, Choice

"In a way [The Hesitant Hand is] very specialist, being about the evolution of the approach to economic welfare since the Ancient Greeks, but particularly since Adam Smith. But . . . I'm finding it unexpectedly thought-provoking. The different perspectives on the definition and assessment of welfare over the ages does indeed shed light on current debates about welfare, market failure and the role of the state."—Diane Coyle, The Enlightened Economist

"This is an excellent book on an important topic, the history of which is fascinating."—Peter Groenewegen, Economic History Review

"I hope this book shall be read widely by those who study the history of economic thought and those who seek an examination of an important fundamental economic problem: the linkage between self-interested behavior and the appropriate role of government."—Daisuke Nakai, History of Economic Thought

"There are too few nuanced accounts of economic policy, so Steven Medema's The Hesitant Hand: Taming Self-Interest in the History of Economic Ideas is a welcome addition to the economics literature. It should be widely read and discussed. . . . I strongly encourage anyone interested in thinking about economists and government policy to read this book; it gives a much better sense of how economists should think of policy analysis than just about any textbook."—David Colander, Eastern Economic Journal

"I finished reading Medema's book eager of a more complete picture of the microeconomic theorizing about the 'hesitant hand' in the twentieth century. I hope that in a future work Medema will give us this broader picture, displaying again the exemplary scholarship and outstanding narrative skills that he showed in this book."—Ivan Moscati, History of Economic Ideas

"The reader is offered a thought-provoking and beautifully written journey along three centuries of economic ideas. . . . Medema has produced a masterful example of how the traditional, 'thin' methodology of doing the history of economic thought may still be extremely useful and fertile. . . . The volume will also prove excellent as a teaching tool at graduate and undergraduate level and, at the same time, will cater to the needs of economists and other social scientists."—Nicola Giocoli, Journal of Economic Methodology

"Riveting. This is an outstanding book. The Hesitant Hand is interesting, scholarly, balanced, and very well-written. I learned a great deal."—Denis O'Brien, professor emeritus, Durham University

"This is a wonderfully clear book that will attract a lot of readers, especially among economists who do not normally consider history relevant to their concerns. Medema tells the story of how our understanding of government and the market has been changed as economists have relentlessly applied the self-interest model."—Roger E. Backhouse, University of Birmingham