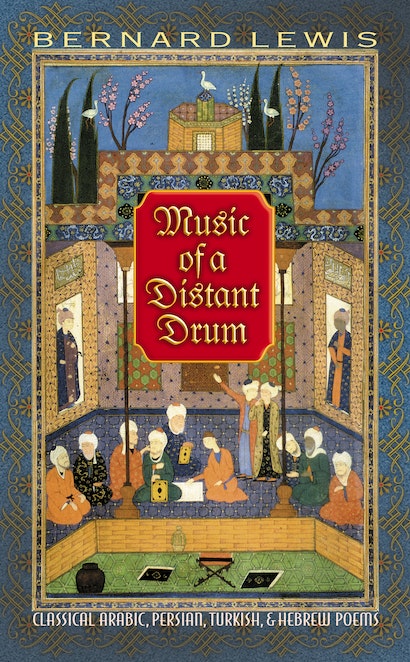 Music of a Distant Drum marks a literary milestone. It collects 129 poems from the four leading literary traditions of the Middle East, all masterfully translated into English by Bernard Lewis, many for the first time. These poems come from diverse languages and traditions — Arabic, Persian, Turkish, and Hebrew — and span more than a thousand years. Together they provide a fascinating and unusual window into Middle Eastern history. Lewis, one of the world’s greatest authorities on the region’s culture and history, reveals verses of startling beauty, ranging from panegyric and satire to religious poetry and lyrics about wine, women, and love.

Bernard Lewis, one of the world’s greatest authorities on the region’s culture and history, offers a work of startling beauty that leaves no doubt as to why such poets were courted by kings in their day. Like those in the Rubaiyat of Omar Khayyam, the poems here — as ensured by Lewis’s mastery of all the source languages and his impeccable style and taste — come fully alive in English. They are surprising and sensuous, disarmingly witty and frank. They provide a fascinating and unusual glimpse into Middle Eastern history. Above all, they are a pleasure to read.They range from panegyric and satire to religious poetry and lyrics about wine, women, and love. Lewis begins with an introduction on the place of poets and poetry in Middle Eastern history and concludes with biographical notes on all the poets.

This treasure trove of verse is aptly summed up by a quote from the ninth-century Arab author Ibn Qutayba: “Poetry is the mine of knowledge of the Arabs, the book of their wisdom, the muster roll of their history, the repository of their great days, the rampart protecting their heritage, the trench defending their glories, the truthful witness on the day of dispute, the final proof at the time of argument.?

In one hand the Qur’vn, in the other a wineglass,
Sometimes keeping the rules, sometimes breaking them.
Here we are in this world, unripe and raw,
Not outright heathens, not quite Muslims.
— Mujir (12th century)

Bernard Lewis is professor emeritus at Princeton University. His many books include What Went Wrong?, The Crisis of Islam, and Faith and Power.

"Sometimes humorous or mystical, the poems focus on family, love and religion. . . . This collection is a fine historical document and anthology of eloquent poetry."—Library Journal

"Only [Lewis] could single-handedly assemble poems from so many languages and cultures into a coherent anthology. . . . Although translating from four languages, Lewis captures the rhythms and cadences of each admirably."—Booklist

"Lewis, one of the foremost scholars of the Middle East, has devoted much of his career to the history of Islam; this volume collects his translations of poems—nearly all appearing in English for the first time—that span eleven centuries and four major Middle Eastern traditions. Many of the most striking works address, in spare, stirring lines, the twin demands of serving the self and serving God."—The New Yorker

"Lewis is probably the doyen of Middle East historians. Few scholars in the field today can match his mastery of languages and his elegant style in English. . . . The translations are a delight to read and give a good sense of the range of subject matter of this poetry."—Choice

"A work of stunning beauty. . . . The poems here, as ensured by Mr. Lewis' mastery of all source languages, and his impeccable style and taste, come fully alive in English."—Surekha Vijh, The Washington Times

"This anthology is a selection of poems representing the forms and styles of Middle Eastern poetry from the 7th to the 18th century in the four leading literary traditions of the Middle East. These poems are revelatory: straightforward and yet filled with longing and desire."—LA Times Book Review

"Bernard Lewis's translations suggest differences of tone and temperament in the wide range of traditions from which he has compiled his anthology, among them classical Arabic, Turkish, and Hebrew poetry, as well as Persian."—W.S. Merwin, The New York Review of Books

"This price-worthy book can be recommended to a very wide variety of readers, lay and academic, interested in poetry and poetics or in the periods, places, and overlapped cultures represented here."—Victor Castellani, European Legacy

"Professor Lewis's earlier translation of Solomon Ibn Gabirol's long philosophical-meditative poem, The Kingly Crown, is masterful and a classic. Given that effort, Lewis's historically minded sensibility, the exceptional literary value of his selection, and the clarity and accuracy of his translations here, Music of a Distant Drum will meet with a waiting and approving audience. There is no comparable volume offering us the opportunity to read and examine side by side poems from these related but distinct literary traditions. This may well be the first and last collection of Middle Eastern lyric poems translated by a single scholar with such a sweeping command of all of the languages and literatures represented."—Ross Brann, Cornell University

"A fine anthology with moments of real beauty. Unlike almost any scholar I can think of, Lewis not only has the linguistic diversity to undertake translations from four different languages, but he has the ability to produce translations with a literary quality that rises to a level one can call poetic."—Carter Findley, Ohio State University