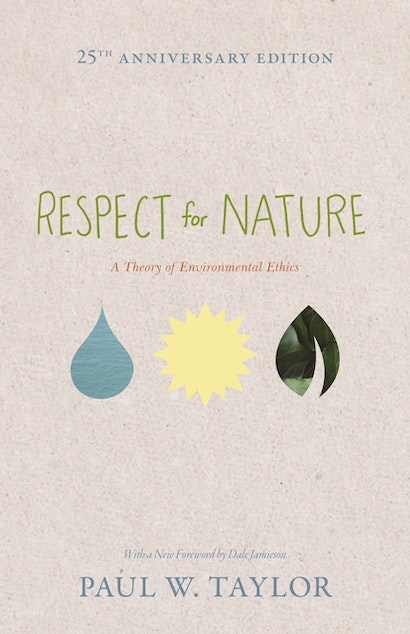 What rational justification is there for conceiving of all living things as possessing inherent worth? In Respect for Nature, Paul Taylor draws on biology, moral philosophy, and environmental science to defend a biocentric environmental ethic in which all life has value. Without making claims for the moral rights of plants and animals, he offers a reasoned alternative to the prevailing anthropocentric view — that the natural environment and its wildlife are valued only as objects for human use or enjoyment. Respect for Nature provides both a full account of the biological conditions for life — human or otherwise — and a comprehensive view of the complex relationship between human beings and the whole of nature.


This classic book remains a valuable resource for philosophers, biologists, and environmentalists alike — along with all those who care about the future of life on Earth. A new foreword by Dale Jamieson looks at how the original 1986 edition of Respect for Nature has shaped the study of environmental ethics, and shows why the work remains relevant to debates today.

"When it first appeared, Respect for Nature was at once recognized for the important, groundbreaking work it was. It was deservedly a major influence in the then newly developing field of environmental ethics. Time has only confirmed this first opinion and it is good to have the book back before us."—Michael Ruse, editor of Philosophy after Darwin

"Paul Taylor notes that just as we would not ask 'What is a human being good for?,' so also should we not ask 'What is nature good for?' This is surely right. His Respect for Nature is a systematic working out of the consequences of this observation. It is even more relevant today than when it first appeared twenty-five years ago."—Stephen Darwall, Yale University