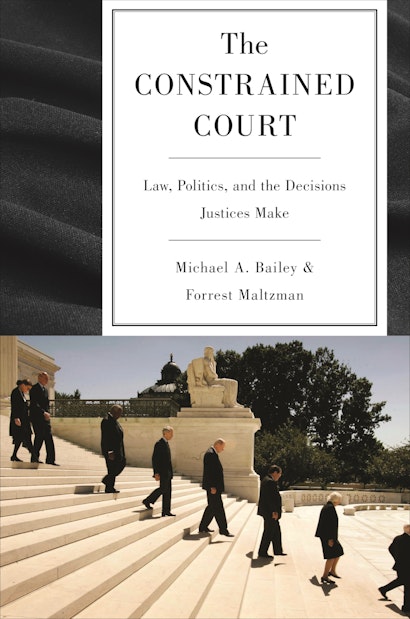 How do Supreme Court justices decide their cases? Do they follow their policy preferences? Or are they constrained by the law and by other political actors? The Constrained Court combines new theoretical insights and extensive data analysis to show that law and politics together shape the behavior of justices on the Supreme Court.


Michael Bailey and Forrest Maltzman show how two types of constraints have influenced the decision making of the modern Court. First, Bailey and Maltzman document that important legal doctrines, such as respect for precedents, have influenced every justice since 1950. The authors find considerable variation in how these doctrines affect each justice, variation due in part to the differing experiences justices have brought to the bench. Second, Bailey and Maltzman show that justices are constrained by political factors. Justices are not isolated from what happens in the legislative and executive branches, and instead respond in predictable ways to changes in the preferences of Congress and the president.

The Constrained Court shatters the myth that justices are unconstrained actors who pursue their personal policy preferences at all costs. By showing how law and politics interact in the construction of American law, this book sheds new light on the unique role that the Supreme Court plays in the constitutional order.

Michael A. Bailey is the Colonel William J. Walsh Professor in the Department of Government and Institute for Public Policy at Georgetown University. Forrest Maltzman is professor of political science at George Washington University. He is the author of Competing Principals and the coauthor of Crafting Law on the Supreme Court and Advice and Dissent.

"[I]n The Constrained Court, Michael Bailey and Forrest Maltzman have launched a frontal assault on the citadel. Their book is a tour de force that will likely supplant the attitudinal model and become a basis for a new paradigm for understanding decision making. . . . I want to underline that is one of the most important studies in the field in the last decade. Neither Bailey nor Maltzman is a trained public law scholar, which makes it so infuriating that they have written such a path breaking study. The book should be mandatory for public law scholars and graduate students and highly recommended, as the authors suggest, for Chief Justice John Roberts."—Richard L. Pacelle, Jr., Law and Politics Book Review

"The Constrained Court challenge[s] established paradigms in [its] fields, introduce[s] inventive and original research and seek[s] to transform the ways in which we think and talk about the nature of judging. It is a testament to the energy imagination, and erudition of the authors that they can legitimately take credit for having advanced these objectives."—Bruce G, Peabody, Perspectives on Politics

"If you want a sophisticated account of judicial decision making that integrates PPT with serious consideration of the role of law, the book you want to buy is The Constrained Court by Bailey and Maltzman. It integrates pivotal politics models with a two dimensional model of judging that represents legal preferences in a rigorous way. The Constrained Court is rigorous and illuminating."—Larry Solum, Harvard Law Review

"Do Supreme Court justices base their decisions on law or politics? Using clever measurement strategies and relentless coding of cases, Bailey and Maltzman answer this question: both. They are to be commended for careful political science that also takes the idea of law seriously. This book is a must-read for scholars and students who care about what motivates the justices of the Supreme Court."—Barry Friedman, New York University

"Using innovative methods, Bailey and Maltzman address fundamental issues about the forces that shape Supreme Court decisions. The book's findings are striking, and the authors' discussions of issues and findings are interesting and insightful. This is one of the best and most important books yet written about judicial behavior."—Lawrence Baum, Ohio State University

"This is one of a small number of the finest books I have read on judicial politics. It uses cutting-edge methods and smart arguments to bring an impressive and sophisticated perspective on political behavior to the study of the Supreme Court. Debunking the most extreme views of political scientists, it will attract a lot of attention."—Gregory Caldeira, Ohio State University