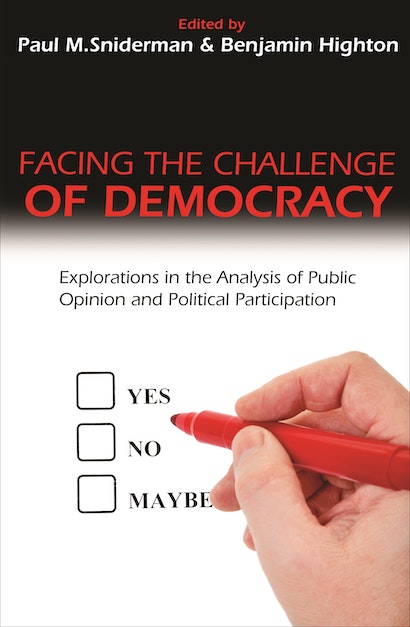 Citizens are political simpletons — that is only a modest exaggeration of a common characterization of voters. Certainly, there is no shortage of evidence of citizens’ limited political knowledge, even about matters of the highest importance, along with inconsistencies in their thinking, some glaring by any standard. But this picture of citizens all too often approaches caricature.


Paul Sniderman and Benjamin Highton bring together leading political scientists who offer new insights into the political thinking of the public, the causes of party polarization, the motivations for political participation, and the paradoxical relationship between turnout and democratic representation. These studies propel a foundational argument about democracy. Voters can only do as well as the alternatives on offer. These alternatives are constrained by third players, in particular activists, interest groups, and financial contributors. The result: voters often appear to be shortsighted, extreme, and inconsistent because the alternatives they must choose between are shortsighted, extreme, and inconsistent.

Paul M. Sniderman is the Fairleigh S. Dickinson, Jr., Professor of Public Policy at Stanford University. Benjamin Highton is associate professor of political science at the University of California, Davis.

"Raymond Wolfinger taught me two things: be guided by common sense, even (and above all) when doing theory. And that, to understand how democracy works, we need first of all to pay attention to ordinary people and how they think and act. This volume exemplifies both these ideas and advances them further than I would have thought possible. This book greatly enlarges our understanding of American democracy."—John A. Ferejohn, New York University School of Law

"These remarkable essays by the profession's leading political scientists not only honor one of the great social scientists, teachers, and mentors of the twentieth century, but advance the long-standing debate about the quality of democracy in America. They are vintage Wolfinger in their approach—confronting sage theories and everyday notions of politics with hard facts."—Steven J. Rosenstone, chancellor, Minnesota State Colleges and Universities

"This lucid collection should give pause to skeptics about democracy. It offers a strong argument that the public is more engaged, consistent in its opinions, and rational in its voting than conventional wisdom holds."—Scott Keeter, Pew Research Center