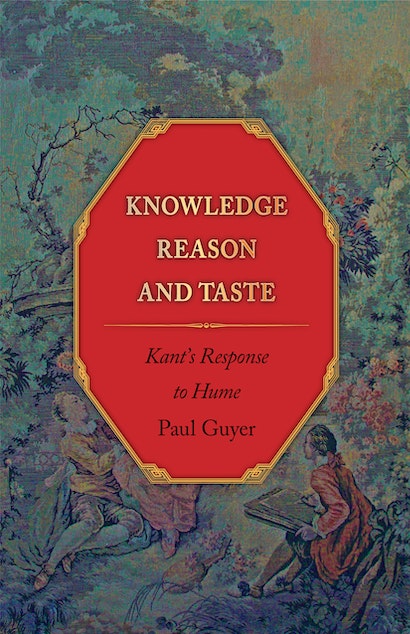 Immanuel Kant famously said that he was awoken from his “dogmatic slumbers,” and led to question the possibility of metaphysics, by David Hume’s doubts about causation. Because of this, many philosophers have viewed Hume’s influence on Kant as limited to metaphysics. More recently, some philosophers have questioned whether even Kant’s metaphysics was really motivated by Hume. In Knowledge, Reason, and Taste, renowned Kant scholar Paul Guyer challenges both of these views. He argues that Kant’s entire philosophy — including his moral philosophy, aesthetics, and teleology, as well as his metaphysics — can fruitfully be read as an engagement with Hume.


In this book, the first to describe and assess Hume’s influence throughout Kant’s philosophy, Guyer shows where Kant agrees or disagrees with Hume, and where Kant does or doesn’t appear to resolve Hume’s doubts. In doing so, Guyer examines the progress both Kant and Hume made on enduring questions about causes, objects, selves, taste, moral principles and motivations, and purpose and design in nature. Finally, Guyer looks at questions Kant and Hume left open to their successors.

Paul Guyer is professor of philosophy and the Florence R. C. Murray Professor in the Humanities at the University of Pennsylvania. The author of eight previous books on Kant, he is also general coeditor of The Cambridge Edition of the Works of Immanuel Kant.

"In detail, and with great clarity and fairness, Guyer compares [Kant's and Hume's] respective treatments of scepticism, of the major concepts of causation, objects, and the self, of practical philosophy and of the philosophy of taste. Guyer shows that the match is by no means as one-sided as the usual view maintains."—Simon Blackburn, Times Higher Education

"Guyer is noted for his Kant scholarship . . . The present book, whose subtitle best expresses its content, is a collection of five previously published essays, somewhat reworked, which range over themes that occupied both Kant and Hume. This is done with magisterial competence."—M.A. Bertman, Choice

"Guyer's book provides a masterful reconstruction of the systematic ambition of Kant's critical philosophy and of the third Critique in particular. In addition, he underlines the essential openness and modesty of the Kantian system that is due to Kant's unwavering insistence on the limits of the human powers of cognition—a point that was not heeded by his immediate successors and is often only poorly understood even today."—Peter Gilgen, Monatshefte

"This is an excellent book. Extending the discussion of the Kant-Hume relationship to moral philosophy, teleology, and aesthetics is novel, important, and interesting. Guyer's knowledge of Kant's texts and his sensitivity to their nuances, developments, and philosophical import are evident throughout."—Eric Watkins, University of California, San Diego

"Clear and comprehensive, this book demonstrates a level of expertise in both Kant and Hume studies that would be very difficult to match. It will become required reading for scholars wanting to understand the complex relationship between these two seminal modern thinkers—in ethics and aesthetics as well as in metaphysics and epistemology. It also persuasively makes the case for thinking of Kant's agenda as at least partly dictated by a desire to respond to Hume on various issues."—Andrew Chignell, Cornell University