The significance of identity and psychology in determining moral choice 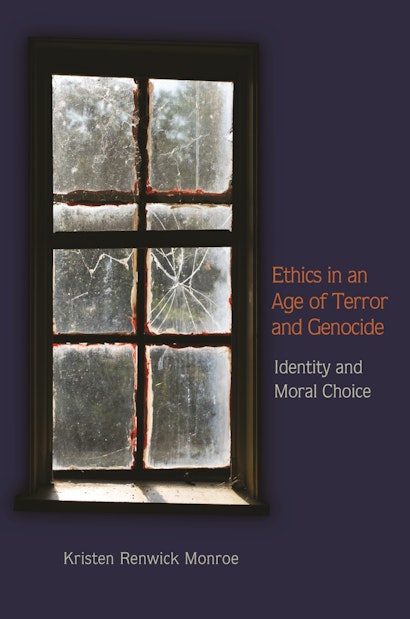 What causes genocide? Why do some stand by, doing nothing, while others risk their lives to help the persecuted? Ethics in an Age of Terror and Genocide analyzes riveting interviews with bystanders, Nazi supporters, and rescuers of Jews during the Holocaust to lay bare critical psychological forces operating during genocide. Monroe’s insightful examination of these moving—and disturbing—interviews underscores the significance of identity for moral choice.

Monroe finds that self-image and identity—especially the sense of self in relation to others—determine and delineate our choice options, not just morally but cognitively. She introduces the concept of moral salience to explain how we establish a critical psychological relationship with others, classifying individuals in need as “people just like us” or reducing them to strangers perceived as different, threatening, or even beyond the boundaries of our concern. Monroe explicates the psychological dehumanization that is a prerequisite for genocide and uses her knowledge of human behavior during the Holocaust to develop a broader theory of moral choice, one applicable to other forms of ethnic, religious, racial, and sectarian prejudice, aggression, and violence. Her book fills a long-standing void in ethics and suggests that identity is more fundamental than reasoning in our treatment of others.

Kristen Renwick Monroe is professor of political science at the University of California, Irvine. Her many books include The Heart of Altruism and The Hand of Compassion (both Princeton).

"Monroe challenges us to consider the role of identity in decision-making and to ask why some people are able to resist pressures to dehumanize others. Her work promises to help us better understand whether the roots of pro-social behavior can be expanded. Such contributions are important in any era in which terror and genocide exist."—Kristina E. Thalhammer, Perspectives on Politics

"Ethics in an Age of Terror and Genocide is the culmination of Kristen Monroe's twenty years of work on altruism and moral choice. The book is magisterial in scope. Its goals are ambitious, its methods innovative, and its results provocative."—Lee Ann Fujii, Perspectives on Politics

"Monroe leverages her keen insights to help us better understand human nature and then instructs us on how it is displayed in the various actions of others. . . . Ethics in an Age of Terror and Genocide makes a scholarly contribution with a great deal of thought-provoking material that should cause readers to reflect on and better understand the forces that operate to promote good or evil in the world."—Thomas J. Williams, PsycCRITIQUES

"Interesting and ambitious, this book is recommended for use in graduate courses. Some of the case studies may also be used in undergraduate teaching. It deserves wide discussion among scholars interested in ethics. At Florida State, I convene a reading group of graduate students and faculty interested in the intersections of religion, ethics, and philosophy. I plan to assign this study when we meet next fall."—John Kelsay, Holocaust and Genocide Studies

"Readers acquainted with Monroe's earlier works on the Holocaust and its implications will find this a fruitful extension into genocide and related horrors. New readers will find all the background they need and be amazed at the depth of her analysis for the array of personal responses to evil."—Thomas C. Schelling, Nobel Laureate in Economics

Monroe's previous work explored the political psychology of altruism and her analysis was grounded in a treasure trove of interviews with persons who did or did not assist victims of the Holocaust. In this culminating book she extends the project, skillfully using rich and humanly affecting interviews to develop an empirically based theory of moral choice."—Susanne Hoeber Rudolph, University of Chicago

"This is an excellent, compelling, and persuasive book. The interviews, in particular, constitute a priceless resource and are a phenomenal contribution to our understanding of individual variance, societal pressure, and the tremendous burden of fully accepting freedom in moral choice. A tour de force."—Rose McDermott, Brown University

"I love Monroe's writing. With broad intellectual sweep, she draws on moral philosophy, brain imaging studies, psychology (evolutionary, developmental, and social), and more, to make sense of her interviews with rescuers, bystanders, and Nazis. Monroe profoundly cares about the horror of genocide and shows how a few acquire the ethics to resist while most do not. There are few topics as important as this one."—Sam McFarland, Western Kentucky University