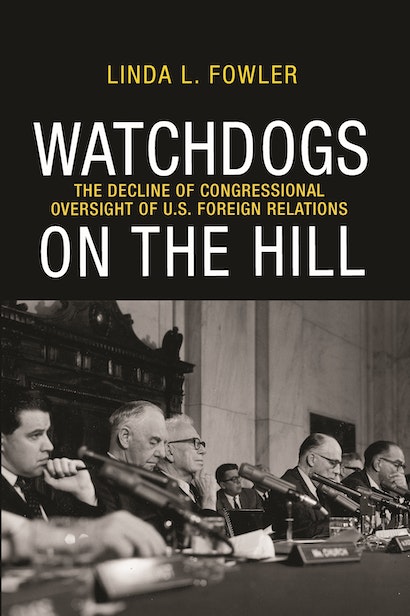 An essential responsibility of the U.S. Congress is holding the president accountable for the conduct of foreign policy. In this in-depth look at formal oversight hearings by the Senate Armed Services and Foreign Relations committees, Linda Fowler evaluates how the legislature’s most visible and important watchdogs performed from the mid-twentieth century to the present. She finds a noticeable reduction in public and secret hearings since the mid-1990s and establishes that American foreign policy frequently violated basic conditions for democratic accountability. Committee scrutiny of the wars in Iraq and Afghanistan, she notes, fell below levels of oversight in prior major conflicts.

Fowler attributes the drop in watchdog activity to growing disinterest among senators in committee work, biases among members who join the Armed Services and Foreign Relations committees, and motives that shield presidents, particularly Republicans, from public inquiry. Her detailed case studies of the Truman Doctrine, Vietnam War, Panama Canal Treaty, humanitarian mission in Somalia, and Iraq War illustrate the importance of oversight in generating the information citizens need to judge the president’s national security policies. She argues for a reassessment of congressional war powers and proposes reforms to encourage Senate watchdogs to improve public deliberation about decisions of war and peace.

Watchdogs on the Hill investigates America’s national security oversight and its critical place in the review of congressional and presidential powers in foreign policy.

Linda L. Fowler is professor of government and the Frank J. Reagan Chair in Policy Studies, Emerita, at Dartmouth College. She is the author of Candidates, Congress, and the American Democracy and coauthor of Political Ambition.

"[T]his book is an important contribution to the debate on the role of Congress in making foreign policy and, perhaps, even provides a guide for a way out."—Choice

"Examining the evolution and deterioration of oversight on the Senate side of the Capitol, this thorough and theoretically grounded work offers systematic insight into the national security watchdog that doesn't always bark. Fowler's call to 'renew foreign policy oversight' will be deeply interesting to scholars, practitioners, and citizens alike."—Christopher J. Deering, George Washington University

"Scholars and observers have long been uneasy about declining congressional influence over foreign affairs. Corroborating these anxieties, this important book documents a marked falloff in congressional oversight since the 1990s. Fowler identifies culprits that extend beyond party polarization—most particularly declines in congressional specialization and media visibility. The upshot: senators' incentives are no longer aligned to serve the public's needs for understanding and accountability in foreign policy."—Frances E. Lee, University of Maryland

"Congress has played an important, but often underrecognized, role in US foreign policymaking. This book shows that the oversight activities of the Senate Armed Services and Senate Foreign Relations Committees are significant, but that they each proceed differently due to their specific roles. No other studies about these committees are as current or examine as wide a time frame."—Ralph Carter, Texas Christian University

"In an illuminating study of congressional hearings on foreign policy, Linda Fowler weaves fascinating case studies with quantitative analyses of original data. Fowler tracks the activities of the Armed Services and Foreign Affairs Committees over a considerable stretch of time, revealing new facts about who serves on these committees and what influence they wield. With this volume, the growing literature on the domestic politics of war is broadened and enriched."—William Howell, University of Chicago