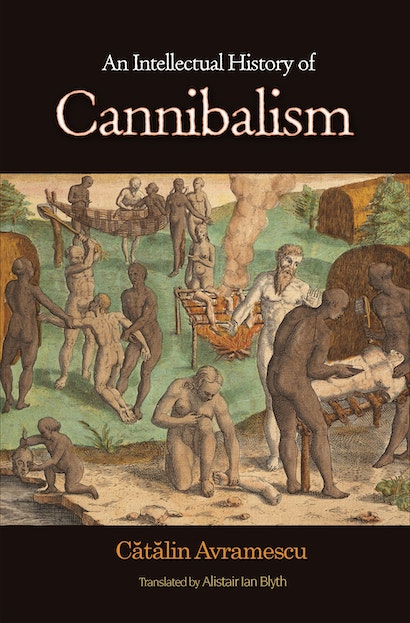 The cannibal has played a surprisingly important role in the history of thought — perhaps the ultimate symbol of savagery and degradation — haunting the Western imagination since before the Age of Discovery, when Europeans first encountered genuine cannibals and related horrible stories of shipwrecked travelers eating each other. An Intellectual History of Cannibalism is the first book to systematically examine the role of the cannibal in the arguments of philosophers, from the classical period to modern disputes about such wide-ranging issues as vegetarianism and the right to private property.


Catalin Avramescu shows how the cannibal is, before anything else, a theoretical creature, one whose fate sheds light on the decline of theories of natural law, the emergence of modernity, and contemporary notions about good and evil. This provocative history of ideas traces the cannibal’s appearance throughout Western thought, first as a creature springing from the menagerie of natural law, later as a diabolical retort to theological dogmas about the resurrection of the body, and finally to present-day social, ethical, and political debates in which the cannibal is viewed through the lens of anthropology or invoked in the service of moral relativism.


Ultimately, An Intellectual History of Cannibalism is the story of the birth of modernity and of the philosophies of culture that arose in the wake of the Enlightenment. It is a book that lays bare the darker fears and impulses that course through the Western intellectual tradition.

"This book is a true banquet, a lavish succession of courses making up a real blowout of facts and references, some spicy, some less so, all served up with delicious side dishes and copious drafts of heady intellectual wine. A few readers may find the whole meal a little more filling than they might have wished, but it is certainly a major scholarly feast."—Simon Blackburn, Times Higher Education

"[T]his is a remarkable work and there really is no other book like it."—Noel Malcolm, Standpoint

"Avramescu's study of the intellectual history of ideas about cannibalism is an absorbing analysis and a compelling critique of the history of political thought, which every student of human history and intraspecies violence will want to include in her personal library. The translation offers a flowing and elegant read, accessible to any educated audience, and would serve well as a textbook in higher education classes on political thought and violence. I recommend the book most highly."—Wendy C. Hamblet, Metapsychology Online

"We have here a fresh look at texts much interpreted, especially from the Enlightenment, but viewed from relatively unexplored angles."—Choice

"Avramescu wants to know why the history of thinking-with-cannibals is coextensive, more or less, with early modern history, the period from the age of discovery to the age of enlightenment. Even if Avramescu's affectionate revival of the figure of the cannibal is not a project of its time, his work reminds us nonetheless of the treasures to be found along the via negativa through the history of political philosophy."—Justin E. H. Smith, n+1

"The book's outstanding feature is the author's encyclopedic knowledge and erudite treatment of relevant historical and philosophical works, travel literature, and geographic literature. . . . [T]here is no denying the extremely original, valuable and challenging nature of this work."—Tim Murphy, European Legacy

"This study is essential reading for those interested in the intellectual history of Europe and for ethnographers concerned with cannibal discourses and fantasies."—Gananath Obeyesekere, Historian

"Romanian philosopher Catalin Avramescu's learned and brilliantly told intellectual history of anthropophagy recovers the cannibal's once central place in formal thought about what it means to be human."—Steven Shapin, Los Angeles Review of Books

"This provocative and often brilliant book is not so much a contribution to 'cannibal' studies as a critical evaluation of the Enlightenment's (and, by extension, our own) moral perspective. . . . Avramescu's research ranges widely, and his readings of familiar texts are always sharp and original. . . . [H]e brilliantly articulates the critical challenges raised by eighteenth-century human science."—David W. Bates, ISIS

"In intellectual history, cannibals stand for alien and exotic human beings, specimens of our species who realize its darkest possibilities, usually in places far removed from civilization. Cannibalism both expresses natural law and contravenes it. Avramescu's book is a tour de force. It explains not only why the figure of the cannibal used to be ubiquitous in moral philosophy, but why it has become extinct."—Tom Sorell, University of Birmingham

"In this brilliant book, Cătălin Avramescu reexamines the Western tradition of social and political thought, restoring our obsession with cannibalism to its proper place in the European imagination. His erudition is overwhelming as he traces the figure of the cannibal, both fascinating and horrifying, through the period when the modern world was being born. Avramescu shows us our history and ourselves in a completely original and gripping way. An Intellectual History of Cannibalism is a real tour de force."—Daniel Garber, Princeton University

"Avramescu's wonderful study treats the cannibal as a scholarly creature who animates theoretical texts. Avramescu provides his readers with a comprehensive view of the various theories and visions of cannibalism. There is no book quite like this. Cannibalism is at the extreme limit of human thought and language. Avramescu allows us to see why, and he does it very well."—Timo Airaksinen, author of The Philosophy of the Marquis de Sade

"This is a splendid book. An Intellectual History of Cannibalism is a persuasive study of European ideas about cannibalism in relation to theories of natural law and the state of nature. Avramescu defends an original thesis about the site of absolute cruelty in political philosophies of early modern and modern societies. His historical knowledge is stunning. His interpretations are always sober and convincing/"—Thomas Pavel, University of Chicago

"A very exciting and original contribution to our understanding of various approaches to cannibalism from the viewpoint of intellectual history. An Intellectual History of Cannibalism adds significantly to our grasp of the nature of evil and its tortuous itineraries within modern civilization. Avramescu offers us a provocative, challenging book on a topic that bears upon the political and moral catastrophes of modern times."—Vladimir Tismaneanu, University of Maryland