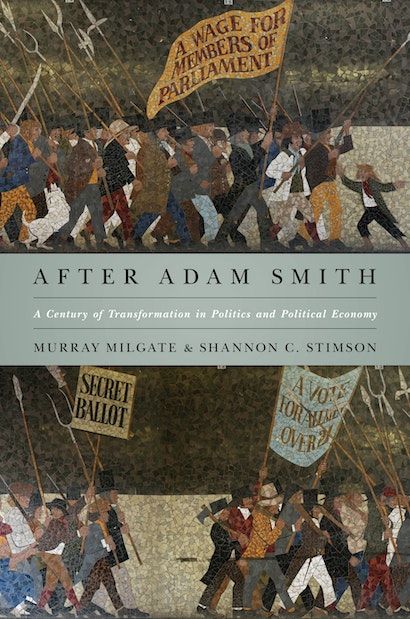 Few issues are more central to our present predicaments than the relationship between economics and politics. In the century after Adam Smith’s Wealth of Nations the British economy was transformed. After Adam Smith looks at how politics and political economy were articulated and altered. It considers how grand ideas about the connections between individual liberty, free markets, and social and economic justice sometimes attributed to Smith are as much the product of gradual modifications and changes wrought by later writers.

Thomas Robert Malthus, David Ricardo, James Mill, John Stuart Mill, and other liberals, radicals, and reformers had a hand in conceptual transformations that culminated in the advent of neoclassical economics. The population problem, the declining importance of agriculture, the consequences of industrialization, the structural characteristics of civil society, the role of the state in economic affairs, and the possible limits to progress were questions that underwent significant readjustments as the thinkers who confronted them in different times and circumstances reworked the framework of ideas advanced by Smith—transforming the dialogue between politics and political economy. By the end of the nineteenth century, an industrialized and globalized market economy had firmly established itself. By exploring how questions Smith had originally grappled with were recast as the economy and the principles of political economy altered during the nineteenth century, this book demonstrates that we are as much the heirs of later images of Smith as we are of Smith himself.

"Milgate and Stimson produce a very careful and detailed analysis of early economists' ideas on issues shaping the modern concept of the political order, in the process displaying a rich array of competing ideas. . . . [T]his book provides a striking perspective on classical political economy. The reader will benefit from some prior familiarity with Smith, Malthus, Ricardo and J. S. Mill, along with the Utilitarians."—Donald Frey, EH.net

"In the last decade, scholars have moved away from the interpretation of Smith as a simple economic determinist who espoused lasissez-faire economics, and Milgate and Simpson have advanced their undertaking immensely with this book."—Donald Stabile, Australian Economic History Review

"Milgate and Stimson have undertaken . . . enormous scholarship in writing their book. Scholars and students of the history of economic ideas, as well as of the history of political economy and political thought in nineteenth-century Europe can benefit enormously from this book."—Farhad Rassekh, History of Economic Ideas

"[M]asterful. . . . [After Adam Smith] is far more than a historical reconstruction: Milgate and Stimson provide new insights about how the complex relations between liberal democratic politics and market institutions might be construed. The book's deeply informed reflection on nineteenth century debates about modern capitalism is a major contribution to our understanding of political economy in the liberal democratic tradition."—from 2011 David and Elaine Spitz Prize Award citation

"[T]horough and stimulating . . . readers unfamiliar with these debates can glean a great deal from [Milgate and Stimson]."—Gavin Kennedy, Adam Smith's Lost Legacy

"This work represents the best of contemporary scholarship on the history of political, economic, and social thought. A signal contribution of this book is the demonstration of how far Smith's original vision was from the image that has been conveyed in so much of the secondary literature and which has come to inform contemporary views of markets and politics. Milgate and Stimson have provided an indispensable resource for thinking through the issues manifest in the recent revival of concerns with political economy and its significance for democratic theory."—John G. Gunnell, University at Albany, State University of New York

"After Adam Smith is a superior piece of scholarship, engagingly written and impressively erudite. Milgate and Stimson are first-rate historians of economic ideas."—Ian Shapiro, Yale University

"This is a fascinating and elegant study of the development of political economy and its relationship to political thought. It is a major contribution to economic and political theory, and to the often neglected but hugely important intersections between the two. It tells a compelling and original story, based on extensive scholarship as well as acute competence in economics."—Hannah Dawson, University of Edinburgh