The signs and signals of criminal communication 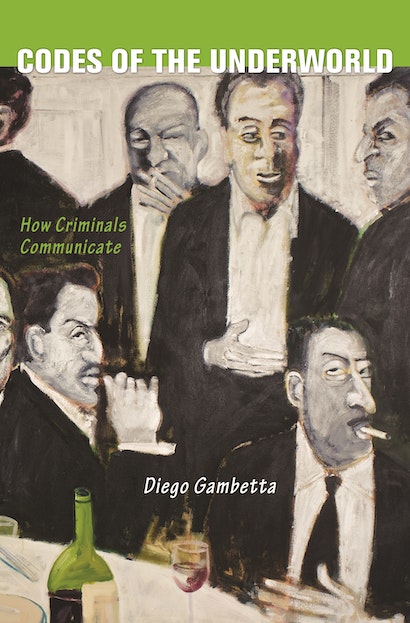 How do criminals communicate with each other? Unlike the rest of us, people planning crimes can’t freely advertise their goods and services, nor can they rely on formal institutions to settle disputes and certify quality. They face uniquely intense dilemmas as they grapple with the basic problems of whom to trust, how to make themselves trusted, and how to handle information without being detected by rivals or police. In this book, one of the world’s leading scholars of the mafia ranges from ancient Rome to the gangs of modern Japan, from the prisons of Western countries to terrorist and pedophile rings, to explain how despite these constraints, many criminals successfully stay in business.

Diego Gambetta shows that as villains balance the lure of criminal reward against the fear of dire punishment, they are inspired to unexpected feats of subtlety and ingenuity in communication. He uncovers the logic of the often bizarre ways in which inveterate and occasional criminals solve their dilemmas, such as why the tattoos and scars etched on a criminal’s body function as lines on a professional résumé, why inmates resort to violence to establish their position in the prison pecking order, and why mobsters are partial to nicknames and imitate the behavior they see in mafia movies. Even deliberate self-harm and the disclosure of their crimes are strategically employed by criminals to convey important messages.

By deciphering how criminals signal to each other in a lawless universe, this gruesomely entertaining and incisive book provides a quantum leap in our ability to make sense of their actions.

Diego Gambetta is Official Fellow of Nuffield College and professor of sociology at the University of Oxford. He is the author of The Sicilian Mafia: The Business of Private Protection and editor of Making Sense of Suicide Missions.

"Criminals can't advertise their products on QVC, yet the mafia and the yakuza have prospered longer than most Fortune 500 companies. In Codes of the Underworld, sociologist Diego Gambetta examines how criminals communicate without being caught, how they build trust in a world where everyone is crooked. . . . odes of the Underworld is colourful and engrossing: it could appeal to policymakers, academics, laymen or, God forbid, criminals looking to improve their game."—Spectator

"[A]n absolutely fascinating look at the unique problems criminals face when trying to communicate with one another. . . . Fans of crime fiction will love this."—Graham Lawton, NewScientist.com's CultureLab blog

"'A wiseguy sees things if there are wiseguy things to see,' wrote Joe Pistone, the FBI agent better known as Donnie Brasco—the name under which he managed to infiltrate the mob. But what are the wiseguy things to see? And how is a wiseguy to know he isn't dealing with the likes of Joe Pistone? Such questions are among those that fascinate Diego Gambetta. Professor Gambetta, an Italian sociologist based at Oxford University, has managed to wrap himself in the language of economics as capably as Pistone wrapped himself in the language of organised crime. Gambetta is an authority on the Sicilian mafia, but deploys the tools of an economist to understand them and other criminals."—Tim Harford, Financial Times

"Criminals are in constant fear of being duped, says Diego Gambetta, even as they are busy duping others. Yet hoodlums often seek a literal partner in crime. This, he notes, creates a need for both identification and verification of trust in what is generally an untrustworthy milieu. Lacking a miscreants' yellow page, the question becomes, well, how to find an honest crook? Such concerns pervade Codes of the Underworld, a new book by Gambetta, a professor of sociology at the University of Oxford."—Nina Ayoub, Chronicle of Higher Education

"In Codes of the Underworld, the Oxford sociologist Diego Gambetta uses colorful stories and a minimum of jargon in his quest to analyze how people advertise when their business happens to be illegal. . . . Gambettta sets out to illuminate the world inhabited by these face-tattooed, duel-scarred, razor-brandishing inmates. The result is a book that explains the hidden logic of their behavior in language intelligible to those of us who make it a point to seer clear of both well-armed dictators and well-decorated Mafiosi."—Katherine Mangu-Ward, Reason

"[A]n absolutely fascinating look at the unique problems criminals face when trying to communicate with one another—how, for example, do you advertise for a partner in crime, or win trust in an inherently untrustworthy world?—and the ingenious ways they solve them. . . . Fans of crime fiction will love this."—Graham Lawton, NewScientist.com's CultureLab blog

"Codes of the Underworld persuasively answers new and provocative questions raised from Gambetta's extensive experience in the study of criminal behavior. He introduces and illuminates a vast field of strategic communication where trust cannot be taken for granted. There is nothing comparable in print, and the book's interpretations will carry well beyond the field of conventional crime."—Thomas C. Schelling, Nobel Prize-winning economist

"Codes of the Underworld looks at the fascinating array of signals that criminals use to recognize each other, validate their claims of toughness, and induce trust or fear. This comprehensive picture of underworld communication will make a serious impact on further studies of organized crime."—Marek Kaminski, University of California, Irvine