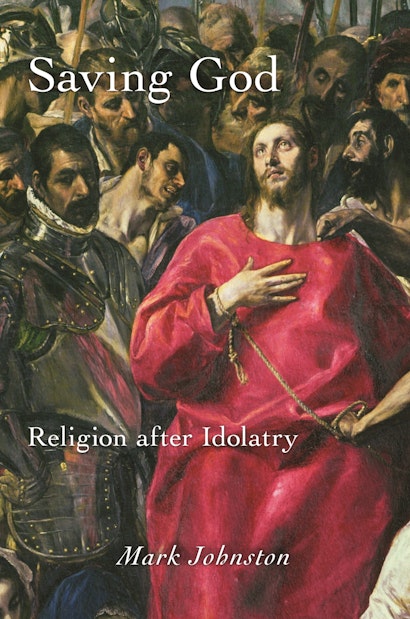 In this book, Mark Johnston argues that God needs to be saved not only from the distortions of the “undergraduate atheists” (Richard Dawkins, Christopher Hitchens, and Sam Harris) but, more importantly, from the idolatrous tendencies of religion itself. Each monotheistic religion has its characteristic ways of domesticating True Divinity, of taming God’s demands so that they do not radically threaten our self-love and false righteousness. Turning the monotheistic critique of idolatry on the monotheisms themselves, Johnston shows that much in these traditions must be condemned as false and spiritually debilitating.

A central claim of the book is that supernaturalism is idolatry. If this is right, everything changes; we cannot place our salvation in jeopardy by tying it essentially to the supernatural cosmologies of the ancient Near East. Remarkably, Johnston rehabilitates the ideas of the Fall and of salvation within a naturalistic framework; he then presents a conception of God that both resists idolatry and is wholly consistent with the deliverances of the natural sciences.

Princeton University Press is publishing Saving God in conjunction with Johnston’s forthcoming book Surviving Death, which takes up the crux of supernaturalist belief, namely, the belief in life after death.

Mark Johnston is the Walter Cerf Professor of Philosophy at Princeton University and the author of Surviving Death (Princeton).

"The non-fiction book I most enjoyed this year might be a stocking-stuffer for both atheists and believers (it is slightly more likely to appeal to the former, but would certainly intrigue believers willing to think about their belief). It is Saving God: Religion After Idolatry (Princeton University Press), by the Princeton philosopher Mark Johnston. This book demolishes, with far greater precision and elegance than anything by Richard Dawkins."—James Wood, New Yorker

"This accessible, sophisticated, and thoughtful work will be an important addition to collections of both philosophy and theology."—Choice

"Saving God is a rich and provocative book. . . . I found Saving God to be original, complex and insightful. However one reacts to Johnston's naturalistic reinterpretation of Christianity and the other monotheisms, one may still applaud his rejection of idolatrous uses of religion to serve human ends."—Lynne Rudder Baker, Notre Dame Philosophical Reviews

"This witty and philosophically subtle book is . . . very Maimonidean in its thoroughgoing rejection of superstition and idolatry as an offense to true religion."—Menachem Kellner, Jewish Review of Books

"Saving God: Religion after Idolatry is a brilliant book: erudite, intriguing and inventive. Anyone interested in the concept of God and the relationship between religion and naturalism will want to read it."—Allen Stairs, Philosophy in Review

"This book is a brilliantly conceived contribution to natural theology. Taken together with Johnston's forthcoming Surviving Death, it constitutes the most interesting and provocative elaboration of religious naturalism since Santayana."—Jeffrey Stout, author of Democracy and Tradition and Ethics after Babel

"This is a remarkable, fascinating, and important book, one that exhibits rich philosophical erudition—which it wears lightly—and startling philosophical insight. It is, at its core, a work of natural theology, a distinctly philosophical endeavor, but the book neatly sidesteps all the dead ends that such a project has created for itself in the last couple of centuries."—James C. Edwards, author of The Plain Sense of Things: The Fate of Religion in an Age of Normal Nihilism

"This is one of those rare works in philosophical theology that presents a complex, novel view in a manner accessible to the general reader. This is an exciting book."—Andrew Chignell, Cornell University