From an economist who warned of the global financial crisis, a new warning about the continuing peril to the world economy 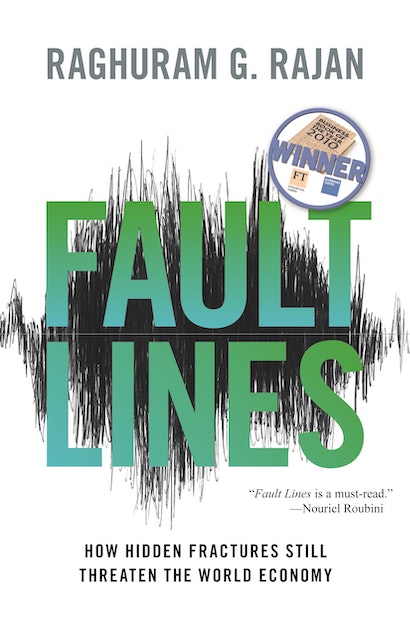 Raghuram Rajan was one of the few economists who warned of the global financial crisis before it hit. Now, as the world struggles to recover, it’s tempting to blame what happened on just a few greedy bankers who took irrational risks and left the rest of us to foot the bill. In Fault Lines, Rajan argues that serious flaws in the economy are also to blame, and warns that a potentially more devastating crisis awaits us if they aren’t fixed.

Rajan shows how the individual choices that collectively brought about the economic meltdown—made by bankers, government officials, and ordinary homeowners—were rational responses to a flawed global financial order in which the incentives to take on risk are incredibly out of step with the dangers those risks pose. He traces the deepening fault lines in a world overly dependent on the indebted American consumer to power global economic growth and stave off global downturns. He exposes a system where America’s growing inequality and thin social safety net create tremendous political pressure to encourage easy credit and keep job creation robust, no matter what the consequences to the economy’s long-term health; and where the U.S. financial sector, with its skewed incentives, is the critical but unstable link between an overstimulated America and an underconsuming world.

In Fault Lines, Rajan demonstrates how unequal access to education and health care in the United States puts us all in deeper financial peril, even as the economic choices of countries like Germany, Japan, and China place an undue burden on America to get its policies right. He outlines the hard choices we need to make to ensure a more stable world economy and restore lasting prosperity.

Raghuram G. Rajan is the Eric J. Gleacher Distinguished Service Professor of Finance at the University of Chicago Booth School of Business and former chief economist at the International Monetary Fund. He is the coauthor of Saving Capitalism from the Capitalists (Princeton).

"[E]xcellent. . . . [Fault Lines] deserve[s] to be widely read in a time when the tendency to blame everything on catch-all terms like 'globalisation' is gaining ground."—Economist

"Like geological fault lines, the fissures in the world economic system are more hidden and widespread than many realize, he says. And they are potentially more destructive than other, more obvious culprits, like greedy bankers, sleepy regulators and irresponsible borrowers. Mr. Rajan . . . argues that the actions of these players (and others) unfolded on a larger world stage, that was (and is) subject to the imperatives of political economies. . . . [A] serious and thoughtful book."—New York Times

"The book, published by Princeton University Press, saw off stiff competition from five others on the shortlist, to be chosen as 'the most compelling and enjoyable' business title of 2010. The final intense debate among the seven judges came down to a choice between Fault Lines and Too Big to Fail, Andrew Ross Sorkin's acclaimed minute-by-minute analysis of the collapse of Lehman Brothers. The book identifies the flaws that helped cripple the world financial system, prescribes potential remedies, but also warns that unless policymakers push through painful reforms, the world could be plunged into renewed turmoil."—Financial Times

"Rajan is worth reading not just because he was correct when few were but also because his writing is clear as a bell, even to nonspecialists."—Christopher Caldwell, Weekly Standard

"The left has figured out who to blame for the financial crisis: Greedy Wall Street bankers, especially at Goldman Sachs. The right has figured it out, too: It was government's fault, especially Fannie Mae and Freddie Mac. Raghuram Rajan of the University of Chicago's Booth School of Business says it's more complicated: Fault lines along the tectonic plates of the global economy pushed big government and big finance to a financial earthquake. To him, this was a Greek tragedy in which traders and bankers, congressmen and subprime borrowers all played their parts until the drama reached the inevitably painful end. (Mr. Rajan plays Cassandra, of course.) But just when you're about to cast him as a University of Chicago free-market stereotype, he surprises by identifying the widening gap between rich and poor as a big cause of the calamity."—David Wessel, Wall Street Journal

"In a new book . . . entitled Fault Lines, Rajan argues that the initial causes of the breakdown were stagnant wages and rising inequality. With the purchasing power of many middle-class households lagging behind the cost of living, there was an urgent demand for credit. The financial industry, with encouragement from the government, responded by supplying home-equity loans, subprime mortgages, and auto loans. . . . The side effects of unrestrained credit growth turned out to be devastating—a possibility most economists had failed to consider."—John Cassidy, New Yorker

"What if the financial crash of 2008 was really caused by income inequality? Not greedy bankers, not reckless homeowners, but the ever widening-gulf between the rich and the poor? And what if the lack of social services—like health care—made things much, much worse? This is the startling new theory from Raghuram Rajan. . . . [Fault Lines is] especially fascinating because it mixes free-market Chicago School economics with good-government ideas straight out of Obamaland."—John Richardson, Esquire.com

"A high-powered yet accessible analysis of the financial crisis and its aftermath, Fault Lines was awarded the FT/Goldman Sachs Business Book of the Year. Rajan . . . was one of the few who warned that the crisis was coming and his book fizzes with striking and thought-provoking ideas."—Financial Times

"What caused the crisis? . . . There is an embarrassment of causes—especially embarrassing when you recall how few people saw where they might lead. Raghuram Rajan . . . was one of the few to sound an alarm before 2007. That gives his novel and sometimes surprising thesis added authority. He argues in his excellent new book that the roots of the calamity go wider and deeper still."—Clive Crook, Financial Times

"Few people were able to foresee the recent economic downturn. Raghuram Rajan . . . was one of them. This makes his new book, Fault Lines, worthy of consideration amidst the rampant speculation about the causes of the financial crisis. . . . Fault Lines is valuable primarily for its clear explanation of unintended economic consequences from well-meaning government intervention."—Washington Times

"Former IMF chief economist Raghuram G. Rajan . . . in his new book, Fault Lines, brings together and explains the diverse failings that contributed to the crisis—the fault lines, as he puts it, that were exposed by the events of the past several years. Rajan then puts forward broad policy recommendations to ward off a future problem. . . . Rajan's book takes a comprehensive look at what got us into the crisis and offers an intriguing approach to avoiding another one."—Phillip Swagel, Finance & Development

"The proposed global reforms that [Rajan] lists in Fault Lines run the gamut from the prosaic to grandiose. Along with revamping Wall Street's pay system, he offers innovative ideas on building capital buffers into the global credit system, obviating much of the need for bailouts of companies deemed too big or too enmeshed in the financial system to fail."—Barron's

"Economists who can challenge their peers while remaining accessible to the general reader are rare, but Rajan belongs to this elite group. No short summary can do justice to this well-written, insightful, and nuanced study."—Choice

"In 2007, then-chief IMF economist Raghuram G. Rajan delivered a stark warning to the world's top bankers: financial markets were headed for doom. They laughed it off. In the wake of the collapse that followed, Rajan has written a new book, Fault Lines: How Hidden Fractures Still Threaten the World Economy, that warns the system is doomed to repeat its mistakes. Like many defenders of the market, Rajan urges us not to demonize the bankers. But it's this fiscal conservative's focus on inequality that makes him stand out from the pack. The growing wage gap, he argues, is a hidden driver of financial instability, putting constant pressure on politicians to enact short-term fixes."—Toronto Star

"The critics are wrong: Raghuram Rajan's analysis of the global financial crisis remains highly relevant and deserves to be widely read. . . . The breadth of Rajan's explanatory framework—which is presented cogently and concisely within 230 pages of text—marks this book apart from many others that tackle the same themes."—Mark Hannam, Prospect

"Dozens of experts have explored the reasons behind the ongoing global economic turmoil, and Raghuram Rajan provides his own elegant and thoughtful analysis in Fault Lines."—BizEd

"With Fault Lines, Rajan has made an original diagnosis of the credit crisis, one that goes much further than those of greedy bankers or wasteful mortgage giants such as Fannie Mae and Freddie Mac."—Christophe De Rijcke, De Tijd

"A book that should be the default choice of discerning finance professionals when they enter the store the next time."—D. Murali, Business Line

"Rajan's Fault Lines is . . . expansive and policy-focused and clearly destined to become a must-read on any list of books on the recent global crisis."—Jahangir Aziz, Business Standard

"Insightful, educative and incredibly gripping, if you want just one book to understand the ongoing global financial crisis and the way forward, Fault Lines it is."—Gautam Chikermane, Hindustan Times

"Fault Lines has a strong claim to be the economics book that best caught the spirit of 2010. Raghuram Rajan's receipt of the Financial Times and Goldman Sachs annual business book award only confirmed his book's widespread popularity. It is not hard to see why so many people liked it. Fault Lines eschews hyperbole for a lucid and balanced account of the crisis."—Fund Strategy

"Rajan . . . comes up with original and important long-term remedies. . . . Rajan's book is a bold enterprise in three ways: firstly it aims to explain the US financial crisis by looking at deep, decade-long fractures in economies and societies; secondly it suggests well-known but radical solutions that few dare put forward; and finally it supplies innovative answers to practical questions. . . . [T]he book will please any reader looking for an inquiry into the deepest causes of the recession and a consistent account of government's errors of omission and commission."—Natacha Postel-Vinay, British Politics and Policy

"In a well-written, well-organized study, he focuses on ten of the most important issues bedeviling a still shaky world economy. Neither too technical for laymen nor too glib for specialists, the book ought to be a significant contribution to policy-makers' discussions of where we go now."—Joel Campbell, International Affairs

"Just when you thought you had heard it all and that there is not much more that we can learn from the recent financial crises, here comes a brand-new assessment from another angle. . . . Written with clarity and persuasion."—Good Book Guide

"[T]his book is a must read for analysts, academics, politicians, economists, and the like."—Emilia Garcia-Appendini, Financial Markets and Portfolio Management

"Fault Lines provides an excellent analysis of the lessons to be learned from the financial crisis, and the difficult choices that lie ahead. Of the many books written in the wake of our recent economic meltdown, this is the one that gets it right."—George A. Akerlof, coauthor of Animal Spirits and Identity Economics

"Amidst the welter of books about our financial crisis, Rajan's book stands out for several reasons: the author's intellectual distinction, his academic and real-world involvement in the problems of finance and the macroeconomy, his global perspective, his search for the roots of the financial crisis in America's growing economic inequality, and also his prescience. In 2005, Rajan foresaw the coming financial collapse—and was fiercely criticized for his insight."—Richard A. Posner, author of A Failure of Capitalism: The Crisis of '08 and the Descent into Depression

"Beautifully clear, cogent, and highly readable. This is the best book out there on the global imbalances that gave us the last financial crisis and might well give us the next one."—Kenneth S. Rogoff, coauthor of This Time Is Different: Eight Centuries of Financial Folly