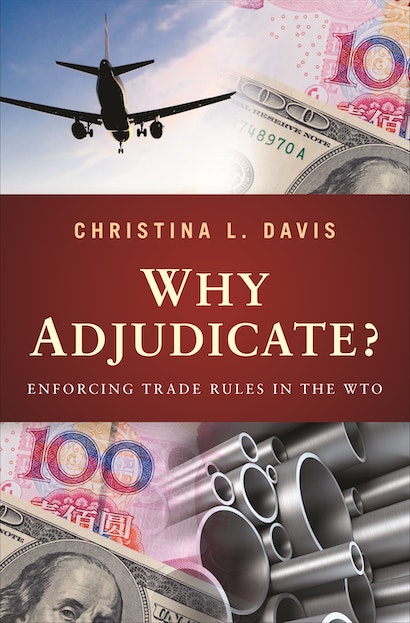 The World Trade Organization (WTO) oversees the negotiation and enforcement of formal rules governing international trade. Why do countries choose to adjudicate their trade disputes in the WTO rather than settling their differences on their own? In Why Adjudicate?, Christina Davis investigates the domestic politics behind the filing of WTO complaints and reveals why formal dispute settlement creates better outcomes for governments and their citizens.


Davis demonstrates that industry lobbying, legislative demands, and international politics influence which countries and cases appear before the WTO. Democratic checks and balances bias the trade policy process toward public lawsuits and away from informal settlements. Trade officials use legal complaints to manage domestic politics and defend trade interests. WTO dispute settlement enables states and domestic groups to signal resolve more effectively, thereby enhancing the information available to policymakers and reducing the risk of a trade war. Davis establishes her argument with data on trade disputes and landmark cases, including the Boeing-Airbus controversy over aircraft subsidies, disagreement over Chinese intellectual property rights, and Japan’s repeated challenges of U.S. steel industry protection. In her analysis of foreign trade barriers against U.S. exports, Davis explains why the United States gains better outcomes for cases taken to formal dispute settlement than for those negotiated. Case studies of Peru and Vietnam show that legal action can also benefit developing countries.

Christina L. Davis is associate professor of politics and international affairs at Princeton University. She is the author of Food Fights over Free Trade: How International Institutions Promote Agricultural Trade Liberalization (Princeton).

"Why Adjudicate is a must-read for any scholar interested in legalization of world politics, the role of international courts and the mechanisms of trade policy. I am sure this book will inspire these research programs and the field of International Political Economy for years to come."—Manfred Elsig, Review of International Organizations

"Christina L. Davis provides an insightful and careful analysis of the domestic underpinnings of international trade law litigation. Why Adjudicate? fills a real gap in the literature by examining the factors that both shape and determine when states pursue legal challenges before the World Trade Organization's dispute-settlement mechanism. . . . Focusing on the United States and Japan as her primary case studies, she has completed an exceptional and valuable study that will be read by both scholars and professionals for years to come."—Jacqueline Krikorian, Perspectives on Politics

"The book provides a cogent and compelling domestic logic. . . . Davis' book, a solid contribution by one of today's leading trade scholars, is also valuable for directing greater attention to how members navigate the multilateral trade regime, which is as important as the judicial activism of its arbitration panels. The book's findings have implications not only for the future of WTO dispute settlement reform—less is better—but for the benefits of legalization more broadly."—Soo Yeon Kim, World Trade Review

"Christina Davis provides fresh insight into the adjudication of trade disputes. She convincingly argues that governments routinely file such disputes as a response to domestic political pressure, and she furnishes an impressive array of empirical evidence to substantiate this claim. The result is a book that will make a significant contribution to research on the political economy of international trade."—Edward Mansfield, University of Pennsylvania

"Many scholars and professionals are focused on the question of the effectiveness of the WTO as a mechanism for resolution of trade disputes. This book offers particular insight into this question and also considers the implications for new entrants in the international trading system, such as China. Why Adjudicate? is an extremely insightful volume and a pleasure to read."—Merit E. Janow, Columbia University

"Why Adjudicate? makes an important set of arguments about the WTO, putting forth a novel theory of domestic politics to explain state behavior in the institution. This compelling book dovetails nicely with existing WTO studies in law, economics, and political science, yet moves beyond analyses of wins and losses."—Jon C. Pevehouse, University of Wisconsin-Madison, coauthor of While Dangers Gather: Congressional Checks on Presidential War Powers