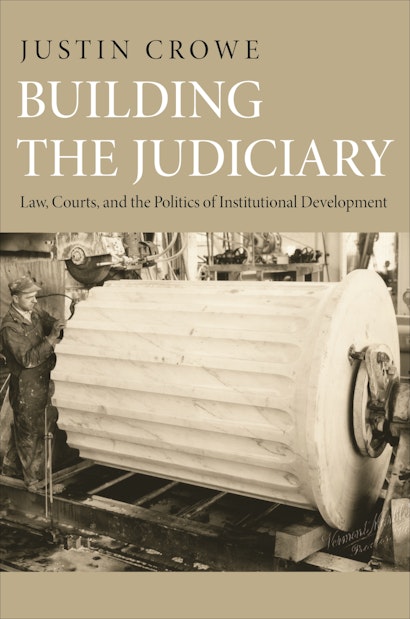 How did the federal judiciary transcend early limitations to become a powerful institution of American governance? How did the Supreme Court move from political irrelevance to political centrality? Building the Judiciary uncovers the causes and consequences of judicial institution-building in the United States from the commencement of the new government in 1789 through the close of the twentieth century. Explaining why and how the federal judiciary became an independent, autonomous, and powerful political institution, Justin Crowe moves away from the notion that the judiciary is exceptional in the scheme of American politics, illustrating instead how it is subject to the same architectonic politics as other political institutions.


Arguing that judicial institution-building is fundamentally based on a series of contested questions regarding institutional design and delegation, Crowe develops a theory to explain why political actors seek to build the judiciary and the conditions under which they are successful. He both demonstrates how the motivations of institution-builders ranged from substantive policy to partisan and electoral politics to judicial performance, and details how reform was often provoked by substantial changes in the political universe or transformational entrepreneurship by political leaders. Embedding case studies of landmark institution-building episodes within a contextual understanding of each era under consideration, Crowe presents a historically rich narrative that offers analytically grounded explanations for why judicial institution-building was pursued, how it was accomplished, and what — in the broader scheme of American constitutional democracy — it achieved.

"Crowe takes the position that, despite the conventional wisdom that the institutional legitimacy of the federal judiciary is a product of its own decisions, the growth of the institutional development and legitimacy of the national courts is a result of continued and strategic decisions made by political actors outside the judiciary. This interesting, important, and timely thesis is supported by the author's use of events through history. Crowe proves to be a master storyteller; the book is excellently researched and written, and the thesis is strongly and articulately supported. . . . Scholars interested in the judiciary, American political development, Congress, and U.S. history will benefit from this thoughtful book."—Choice

"Building the Judiciary is excellently written and accessible to readers who may have no background in American politics. I highly recommend the book to comparative judicial politics scholars who want to learn about the institutional development of the American federal judiciary."—Maria Popova, Perspectives on Politics

"With the arrival of this book, the idea that elected politicians and unelected judges operate in separate spheres finally has to be put aside. A blockbuster work, this magnificent rendition of how Congress has built federal judicial power invites us to recognize the national judiciary as a central actor in American politics, placed there by continuous legislative design."—Rick Valelly, Swarthmore College

"Building the Judiciary reveals a fascinating paradox of American political development: the courts are periodically pulled into partisan rancor and interbranch warfare, and yet these episodes have resulted in the building of an autonomous and powerful judiciary. This pathbreaking book is a major contribution to understanding how judges have participated in institutional reforms that have forged a unique American state and is a must read for understanding the politics of judicial statecraft."—Sidney Milkis, University of Virginia

"Accurate, accessible, and sound, this book is a much-needed comprehensive developmental history of the entire federal court system. It is a valuable reference work for lawyers, historians, political scientists, and anyone else interested in this subject."—Mark Graber, University of Maryland School of Law

"This is an excellent book, richly textured and nicely argued. Crowe is to be commended for so successfully analyzing the development of the judiciary, given the broad sweep of history covered. His book is a significant contribution to the study of law and courts and will cement the author's reputation as one of the field's brightest young stars."—Kevin McMahon, Trinity College