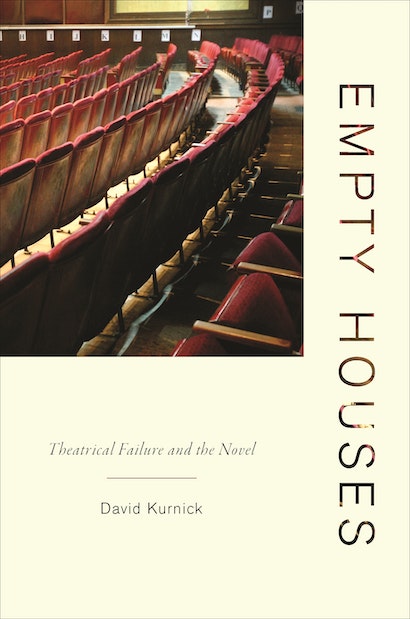 According to the dominant tradition of literary criticism, the novel is the form par excellence of the private individual. Empty Houses challenges this consensus by reexamining the genre’s development from the mid-nineteenth to the mid-twentieth century and exploring what has until now seemed an anomaly — the frustrated theatrical ambitions of major novelists. Offering new interpretations of the careers of William Makepeace Thackeray, George Eliot, Henry James, James Joyce, and James Baldwin — writers known for mapping ever-narrower interior geographies — this book argues that the genre’s inward-looking tendency has been misunderstood. Delving into the critical role of the theater in the origins of the novel of interiority, David Kurnick reinterprets the novel as a record of dissatisfaction with inwardness and an injunction to rethink human identity in radically collective and social terms.


Exploring neglected texts in order to reread canonical ones, Kurnick shows that the theatrical ambitions of major novelists had crucial formal and ideological effects on their masterworks. Investigating a key stretch of each of these novelistic careers, he establishes the theatrical genealogy of some of the signal techniques of narrative interiority. In the process he illustrates how the novel is marked by a hunger for palpable collectivity, and argues that the genre’s discontents have been a shaping force in its evolution.


A groundbreaking rereading of the novel, Empty Houses provides new ways to consider the novelistic imagination.

David Kurnick is associate professor of English at Rutgers University.

"Empty Houses is an admirable book. Its willingness to question established views on the novel has enlightening results. In the boldness and originality of its arguments, it makes a valuable contribution not only to scholarship on the novelists it considers, but also more widely to our understanding of the novel as a genre."—Matthew Peters, Times Literary Supplement

"Erudite, nuanced, and utterly convincing. . . . Empty Houses must soon take its place in the canon of absolutely necessary studies of Victorian and later fiction."—Victorian Studies

"David Kurnick's dazzling new book, Empty Houses, draws much of its considerable force from its antipathy toward the traditional novel's psychosexual categories of identity and their ideological uses. Kurnick elaborates his elegant polemic through substantial and richly satisfying reinterpretations of works, both familiar and relatively neglected."—Joseph Litvak, Novel

"Kurnick's thoughtful, subtle, well-argued book focuses on five writers closely associated with the movement toward, and the apotheosis of, interiority in the novel: Thackeray, George Eliot, Henry James, James Joyce, and James Baldwin. All had theatrical ambitions that were largely unsuccessful. Kurnick makes the case that the novel's shift from public spaces to psychological interior spaces is fraught with ambivalence, with 'longing references to the public worlds they would seem to have left behind.'"—Choice

"Kurnick writes with both precision and verve, and his wonderfully fine grained close readings are always in the service of his larger—sometimes breathtakingly large—claims. . . . This is an important book that demands to be pondered and deserves to be argued with—and applauded."—Daniel Hack, Nineteenth-Century Literature

"Another impressive study is David Kurnick's Empty Houses . . . Kurnick supports his argument with incisive, subtle readings of passages from major novels by his four authors as well as from such less frequently studied works as Thackeray's Lovel the Widower and George Eliot's The Spanish Gypsy."—John O. Jordan, SEL Studies in English Literature

"David Kurnick's rereading of the novel of interiority is undoubtedly far-reaching, yet it is far from monolithic. Part of the strength of his work lies in the varied texture that he gives to his ideas as he explores how writers spanning more than one-hundred years used their experiences with the theater to reshape their prose."—David Kornhaber, Ravon

"Empty Houses, informed by Kurnick's nuanced and convincing formalist readings, is not only an important contribution to narrative theory and genre studies, but also offers insights into several issues that literary scholars have either dismissed or taken for granted, with authorial intention, literary failures, and canonicity being among them.""—Philip Tsang, Textual Practice

"While Kurnick includes fascinating histories of both the nineteenth-century theatre and the allure it held for the aforementioned authors, as well as careful inclusions of other critical interpretations of the fictions he considers, it is Kurnick's own original and ground-breaking analyses of the impact of these unperformed plays, and plays that might have been, that make Empty Houses such a worthwhile read."—Susan Ray, George Eliot-George Henry Lewes Studies

"Kurnick has discerned a 'melancholy of generic distinction' whose ramifications far exceed the novels and novelists on whom he builds his argument."—Jonathan V. Farina, Wordsworth Circle

"Kurnick's radiant and rigorous book . . . has the rare quality of appealing to both theater and novel critics, and in bridging these worlds it enjoins us all to wider aspirations. . . . The argument is intricately nested and wrought in vivacious and exhilarating prose."—Daniel Williams, Modern Language Notes

"This brilliant book examines the close relations between theater and narrative fiction as the Anglophone novel took its famous interior turn between the mid-nineteenth and early twentieth centuries. Drawing on a wide range of critical approaches to unsettle prevailing ideas about the antitheatrical bias of the novel and the increasing separation between the two genres, this will be recognized immediately as a mind-changing contribution to the history of the novel."—Rosemarie Bodenheimer, Boston College

"Through masterly analyses of what he strikingly calls 'the melancholy of generic distinction,' Kurnick explores the relations between personal psychology and collective aspirations, and between aesthetic expression and various social formations and the political imagination. Original and brilliantly argued, Empty Houses will permanently change the way we look at the history of the modern novel."—Leo Bersani, professor emeritus, University of California, Berkeley

"This book radiates an exciting and often inspiring critical intelligence. Kurnick demonstrates—in surprising, original, and thought-provoking detail—how the lapsed enterprise of playwriting rests at the uncanny center of the nineteenth- and twentieth-century novel. In the antagonistic and intimate relationship between the novel and public theater, Kurnick's book gives us an unexpected way to reconsider the novel's troubled, restless negotiations with its own generic identity."—Alex Woloch, Stanford University