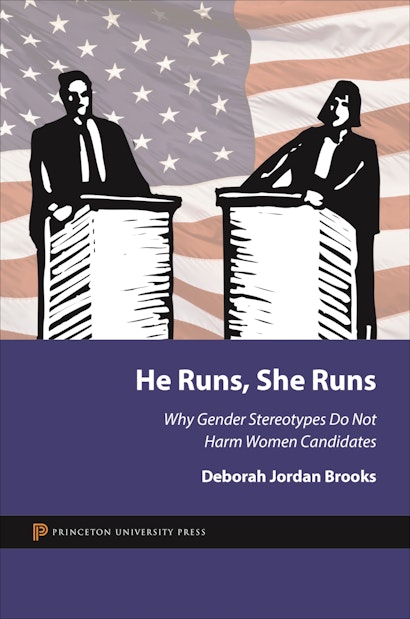 While there are far more women in public office today than in previous eras, women are still vastly underrepresented in this area relative to men. Conventional wisdom suggests that a key reason is because female candidates start out at a disadvantage with the public, compared to male candidates, and then face higher standards for their behavior and qualifications as they campaign. He Runs, She Runs is the first comprehensive study of these dynamics and demonstrates that the conventional wisdom is wrong.


With rich contextual background and a wealth of findings, Deborah Jordan Brooks examines whether various behaviors — such as crying, acting tough, displays of anger, or knowledge gaffes — by male and female political candidates are regarded differently by the public. Refuting the idea of double standards in campaigns, Brooks’s overall analysis indicates that female candidates do not get penalized disproportionately for various behaviors, nor do they face any double bind regarding femininity and toughness. Brooks also reveals that before campaigning begins, women do not start out at a disadvantage due to gender stereotypes. In fact, Brooks shows that people only make gendered assumptions about candidates who are new to politics, and those stereotypes benefit, rather than hurt, women candidates.


Proving that it is no more challenging for female political candidates today to win over the public than it is for their male counterparts, He Runs, She Runs makes clear that we need to look beyond public attitudes to understand why more women are not in office.

Deborah Jordan Brooks is associate professor of government at Dartmouth College. Previously, she was a senior research director at the Gallup Organization.

"Brooks argues that women candidates are not harmed by gender stereotypes, a position that challenges much of the conventional wisdom explaining why women candidates lose to male opponents. The book begins by outlining the accepted theories on why gender matters in political campaigns. The concise review is a nice summary of this body of research."—Choice

"A valuable contribution to the literature on politics and gender. . . . This is a clearly written and carefully argued book."—Erika Kispéter, Identities

"This fascinating book debunks the most commonly offered explanation for why progress toward gender parity in elected representation has stalled. Surprisingly, Brooks finds that male and female politicians are subject to similar expectations from voters, suggesting that our widespread belief in a double standard is an impediment to encouraging more women to run for office. Good news seldom makes headlines, but Brooks' findings need to be widely disseminated."—Diana Mutz, University of Pennsylvania

"This is one of the most important books about gender and politics written in the last twenty-five years. It challenges what we know and is sure to influence how we think about gender. He Runs, She Runs is required reading for anyone interested in the role of women in the workings of democracy."—James Druckman, Northwestern University

"He Runs, She Runs is a provocative analysis of gender stereotypes in U.S. campaigns. With original experimental data, Brooks sheds light on when stereotypes do and don't matter. This engaging book provides important insights into gender and candidacy, and is a valuable contribution to the field."—Kira Sanbonmatsu, Rutgers University

"It seems almost a given that women face a range of disadvantages as political candidates. In this book, Brooks does a masterful job setting up the conventional wisdom before showing that the conventional wisdom is wrong. Accessible, timely, and important, He Runs, She Runs takes on a question that will interest a wide range of people—scholars and political observers alike."—Marc J. Hetherington, Vanderbilt University