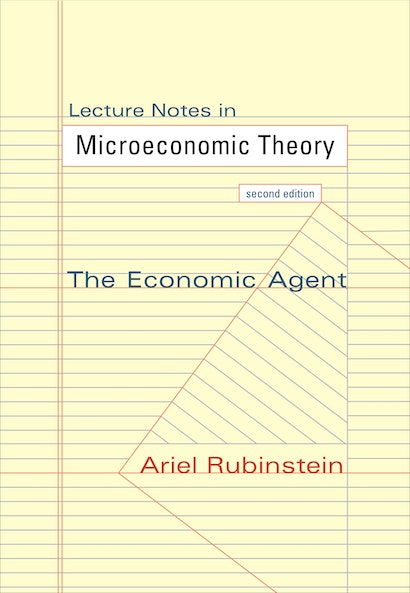 This book presents Ariel Rubinstein’s lecture notes for the first part of his well-known graduate course in microeconomics. Developed during the fifteen years that Rubinstein taught the course at Tel Aviv University, Princeton University, and New York University, these notes provide a critical assessment of models of rational economic agents, and are an invaluable supplement to any primary textbook in microeconomic theory.

In this fully revised and expanded second edition, Rubinstein retains the striking originality and deep simplicity that characterize his famously engaging style of teaching. He presents these lecture notes with a precision that gets to the core of the material, and he places special emphasis on the interpretation of key concepts. Rubinstein brings this concise book thoroughly up to date, covering topics like modern choice theory and including dozens of original new problems.

Written by one of the world’s most respected and provocative economic theorists, this second edition of Lecture Notes in Microeconomic Theory is essential reading for students, teachers, and research economists.


Ariel Rubinstein is professor of economics at Tel Aviv University and New York University. He is the author of Economics and Language and Modeling Bounded Rationality and the coauthor of A Course in Game Theory and Bargaining and Markets.

"Rubinstein's very original work could be considered, in a certain sense, the personification of the co-operative and open ghost professor appearing in the student's home or dorm room while the student is reading, waiting patiently and speaking only if asked. . . . [V]ery thought-provoking."—Ádám Török, Acta Oeconomica

"Ariel Rubinstein is one of the most original and provocative theorists of his generation. These notes, coming from his teaching of graduate microeconomics, exhibit his originality and clarity of thought. Students interested in mastering the foundations of microeconomics will benefit from studying these notes in conjunction with one of the more standard texts."—David M. Kreps, author of A Course in Microeconomic Theory

"This book will be a valuable addition to the small collection of high-level texts in microeconomics. It is distinguished by Rubinstein's characteristic skill in choice of topics and exposition, and by his unique perspective on economic theory and game theory. At the same time, it will be accessible to a wide range of students."—Vincent Crawford, University of California, San Diego

"Ariel Rubinstein is one of the most thoughtful economic theorists. His lecture notes clearly distinguish between rationality-based models as useful objects of mathematical study, and using other kinds of math to incorporate psychological limits on rationality in a disciplined way. This two-pronged perspective gives the book a distinctive twist. It will be widely used by students and teachers, and its interesting ideas about bounded rationality and behavior are unique."—Colin F. Camerer, author of Behavioral Game Theory

Professors: A supplementary Solutions Manual is available for this book. It is restricted to teachers using the text in courses. For information on how to obtain a copy, refer to: http://gametheory.tau.ac.il/microTheory/.