The evolutionary psychology behind human inconsistency 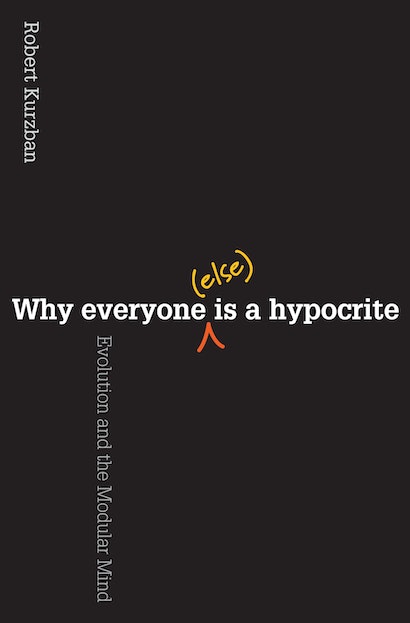 We’re all hypocrites. Why? Hypocrisy is the natural state of the human mind.

Robert Kurzban shows us that the key to understanding our behavioral inconsistencies lies in understanding the mind’s design. The human mind consists of many specialized units designed by the process of evolution by natural selection. While these modules sometimes work together seamlessly, they don’t always, resulting in impossibly contradictory beliefs, vacillations between patience and impulsiveness, violations of our supposed moral principles, and overinflated views of ourselves.

This modular, evolutionary psychological view of the mind undermines deeply held intuitions about ourselves, as well as a range of scientific theories that require a “self” with consistent beliefs and preferences. Modularity suggests that there is no “I.” Instead, each of us is a contentious “we” — a collection of discrete but interacting systems whose constant conflicts shape our interactions with one another and our experience of the world.

In clear language, full of wit and rich in examples, Kurzban explains the roots and implications of our inconsistent minds, and why it is perfectly natural to believe that everyone else is a hypocrite.

Robert Kurzban is associate professor of psychology and founder of the Pennsylvania Laboratory for Experimental Evolutionary Psychology at the University of Pennsylvania. In 2008, he won the inaugural Distinguished Scientific Award for Early Career Contribution from the Human Behavior and Evolution Society.

"Using humour and anecdotes, [Kurzban] reveals how conflict between the modules of the mind leads to contradictory beliefs, vacillating behaviours, broken moral boundaries and inflated egos. He argues that we should think of ourselves not as 'I' but as 'we'—a collection of interacting systems that are in constant conflict."—Nature

"Robert Kurzban believes that we are all hypocrites. But not to worry, he explains, hypocrisy is the natural state of the human mind. In his book Why Everyone (Else) Is a Hypocrite: Evolution and the Modular Mind, Kurzban asserts that the human mind consists of many specialized units, which do not always work together seamlessly. When this harmony breaks down, people often develop contradictory beliefs."—Victoria Stern, Scientific American Mind

"[Kurzban] argues that . . . internal conflicts are not limited to extreme cases; they occur in everyone's brains, leading to illogical beliefs and contradictory behaviors. That's not necessarily a bad thing, according to Kurzban. In fact, being selectively irrational may give us an evolutionary advantage."—Kacie Glenn, Chronicle of Higher Education

"Kurzban has used his view of evolutionary psychology to pursue the concept of 'self' at the heart of both the discipline of psychology and the everyday understanding of human behavior—which surely is of interest to everyone. . . . The book itself is fresh. Kurzban's style is to take traditional questions and apparently reasonable positions and then demonstrate that reasonableness is actually only so under a set of assumptions—and that if they do not conform to the modularity hypothesis then we ought to rethink."—Tom Dickins, Times Higher Education

"We're all inconsistent and self-deceiving, says evolutionary psychologist Robert Kurzban. Our modular minds didn't evolve for consistency, but for patchwork multitasking. . . . As Kurzban says, understanding how and why we can be so 'ignorant, wrong, irrational, and hypocritical' may help us work towards a fairer society."—Susan Blackmore, BBC Focus

"Bolstered by recent studies and research, Kurzban makes a convincing and coherent . . . case for the modular mind, greatly helped by humorous footnotes and examples. . . . Taking on lofty topics, including truth and belief, Kurzban makes a successful case for changing—and remapping—the modern mind."—Publishers Weekly

"Kurzban is a luminary in the growing discipline of evolutionary psychology. . . . Provocative. . . . Kurzban devotes much space to explicating and demonstrating ways in which his theory plays out in our everyday lives."—Library Journal

"With wit, wisdom, and occasional hilarity, Robert Kurzban offers explanations for why we do the things we do, such as morally condemning the sale of human organs and locking the refrigerator at night to keep from snacking. . . . Kurzban touches on some complex topics in a manner that's both smart and accessible. He incorporates a plethora of psychological studies to support his theories but the narrative is never dry. . . . By challenging common assumptions about habits, morality, and preferences, Kurzban keeps readers both entertained and enlightened."—Foreword Reviews

"I'm sure that Why Everyone (Else) Is a Hypocrite will provoke a lot of controversy, and I'm certain that Kurzban's theses will require further refinement. But what a fascinating read!"—Brenda Jubin, Reading the Markets blog

"There is much that is valuable in Kurzban's book."—Peter Carruthers, Trends in Cognitive Sciences

"Kurzban brilliantly (and often hilariously) breaks down the system of functional modules, explaining their existence through evolution, and their hypocrisy through a lack of communication. Why Everyone (Else) is a Hypocrite delves into a part of psychology that has famously been ignored by many prominent members in the field."—Haley M. Dillon and Rachael A. Carmen, Journal of Social, Evolutionary, and Cultural Psychology

"Robert Kurzban is one of the best evolutionary psychologists of his generation: he is distinctive not only for his own successful research and sophisticated understanding of psychology, but also because of his wit—Kurzban is genuinely clever, sly, succinct, and sometimes hilarious."—Steven Pinker, Harvard University

"In this amazing book, Robert Kurzban carries out a brilliantly thought-provoking conversation with himself that made me think hard—and laugh out loud. Using clever examples and a revolutionary scientific approach, he shows that contradiction is truly a fundamental human experience. No wonder, then, that I wanted to share this book with my friends—but I also wanted to keep it for myself! If you don't read this book, you'll be left wondering what everyone (else) is talking about."—James H. Fowler, coauthor of Connected: The Surprising Power of Our Social Networks and How They Shape Our Lives

"Here is a fun counterpoint to the explosion of examples showing that humans do not act in accordance with the predictions of standard rational models. But Kurzban is no defender of the standard models. Rather he seeks an understanding of why our actions may appear contradictory in particular contexts, but serve us well in others, and why that helps to improve our fitness for decision, if not always for a life of liberty."—Vernon L. Smith, Nobel Laureate in Economics