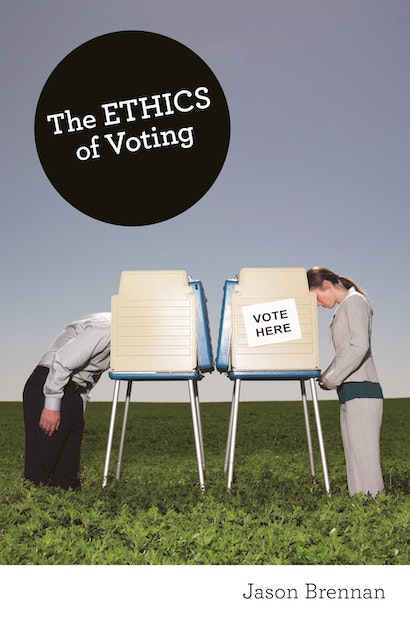 Nothing is more integral to democracy than voting. Most people believe that every citizen has the civic duty or moral obligation to vote, that any sincere vote is morally acceptable, and that buying, selling, or trading votes is inherently wrong. In this provocative book, Jason Brennan challenges our fundamental assumptions about voting, revealing why it is not a duty for most citizens — in fact, he argues, many people owe it to the rest of us not to vote.


Bad choices at the polls can result in unjust laws, needless wars, and calamitous economic policies. Brennan shows why voters have duties to make informed decisions in the voting booth, to base their decisions on sound evidence for what will create the best possible policies, and to promote the common good rather than their own self-interest. They must vote well — or not vote at all. Brennan explains why voting is not necessarily the best way for citizens to exercise their civic duty, and why some citizens need to stay away from the polls to protect the democratic process from their uninformed, irrational, or immoral votes.


In a democracy, every citizen has the right to vote. This book reveals why sometimes it’s best if they don’t. In a new afterword, “How to Vote Well,” Brennan provides a practical guidebook for making well-informed, well-reasoned choices at the polls.

Jason Brennan is assistant professor of ethics at Georgetown University. He is the coauthor of A Brief History of Liberty.

"[Brennan's] relentless focus on the problem of 'wrongful voting' pays off. . . . [His] argument lodges a serious objection to research in political science and behavioral economics suggesting that even lazy voters can use shortcuts to vote well."—Josh Rothman, Boston Globe

"The real value of books such as this lies in their potential to raise the level of public debate. . . . Brennan's argument is detailed and searching, which means that it presents a challenge to anyone prepared to take it seriously."—Alan Haworth, Philosopher's Magazine

"Brennan advances the extraordinarily provocative argument that the sine qua non of civic virtue is not political participation (especially not voting) but the moral duty to promote the common good. . . . Students will appreciate Brennan's highly instructive exercise in argumentation. He constructs cogent justifications for his conceptual framework, outlines reasons for rejecting contrary views, and meets plausible objections to his own formulation."—Choice

"The Ethics of Voting . . . offers a set of provocative and tightly-argued claims. It also changes the way scholars across the social sciences and humanities might want to ask questions about voting. . . . Jason Brennan has written a short, accessible, and tight book that deserves a place on scholars bookshelves."—Art Carden, Public Choice

"Jason Brennan's surprising investigation of the ethics of voting grapples with some of the most entrenched dogmas in our political culture. . . . His conclusions will shake some readers up, and our thinking about democracy will be better for the debates that are sure to ensue."—David Estlund, Brown University

"This is a fascinating book about a very important topic. . . . The Ethics of Voting abounds in interesting claims and good arguments with often surprising conclusions. Beautifully clear and eminently readable, it will be noticed."—Geoffrey Brennan, University of North Carolina, Chapel Hill

"Brennan's book is provocative in the best sense of the word—a fresh and challenging approach to important matters in political theory and political ethics."—Richard Dagger, University of Richmond