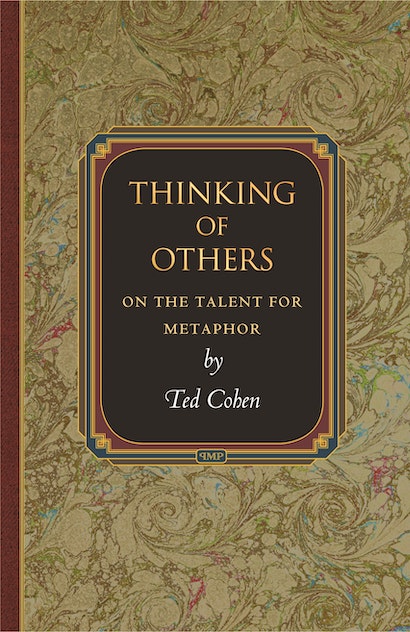 In Thinking of Others, Ted Cohen argues that the ability to imagine oneself as another person is an indispensable human capacity — as essential to moral awareness as it is to literary appreciation — and that this talent for identification is the same as the talent for metaphor. To be able to see oneself as someone else, whether the someone else is a real person or a fictional character, is to exercise the ability to deal with metaphor and other figurative language. The underlying faculty, Cohen argues, is the same — simply the ability to think of one thing as another when it plainly is not.


In an engaging style, Cohen explores this idea by examining various occasions for identifying with others, including reading fiction, enjoying sports, making moral arguments, estimating one’s future self, and imagining how one appears to others. Using many literary examples, Cohen argues that we can engage with fictional characters just as intensely as we do with real people, and he looks at some of the ways literature itself takes up the question of interpersonal identification and understanding.


An original meditation on the necessity of imagination to moral and aesthetic life, Thinking of Others is an important contribution to philosophy and literary theory.

Ted Cohen is a professor of philosophy at the University of Chicago and the author of Jokes: Philosophical Thoughts on Joking Matters.

"Ted Cohen's little philosophical essay on how metaphor gets us to think of others was tremendous."—James Wood, NewYorker.com

"This is really philosophy at its best: clearly written and free from jargon, sophisticated yet unpretentious, and highly engaging."—Jeanette Bicknell, Philosophy in Review

"Cohen has given us, in wonderfully readable and analytically acute form, an unforgettable study of a complexly interwoven set of linguistic, perceptual, and imaginative abilities that not only make us who we are, but make us who we are together."—Garry L. Hagberg, Mind

"Ted Cohen's work on metaphor is well known in the profession, so it comes as no surprise to us that he has now written a splendid book on the subject."—Peter Kivy, Journal of Aesthetics and Art Criticism

"The important, intriguing subject of this small book by Cohen—one's capacity to understand others—is full of perplexing puzzles. Through careful analysis of interesting examples, Cohen makes readers wonder about some of the major impasses in mutual understanding between people with different religious perspectives, with different racial and social experiences, and even with allegiances to different baseball teams."—S.A. Mason, Choice

"[W]hy not invest in Cohen's book? I assure you it will return handsome dividends, even in the present economy."—Peter Kivy, Journal of Aesthetics and Art Criticism

"Thinking of Others represents a performance of a most unusual sort, creating an uncommon relation to its reader and differing beginning to end from other books that might seem to share its subjects. Ted Cohen's book—so full of interesting thoughts and fascinating texts, and all presented in so charming a manner—is a notable contribution."—Stanley Cavell, professor emeritus, Harvard University

"The body of work on metaphor, narrative, and jokes that Ted Cohen has produced over the years is one of the most impressive achievements of analytic aesthetics. His writing exhibits levels of wit, warmth, and conversational accessibility that are the envy of the rest of us. Thinking of Others explores the close analogies between the insight and intimacy we obtain from metaphorical identifications like 'Juliet is the sun' and the insight and intimacy we obtain by imagining ourselves into the shoes of another or the shoes of our own future self. For Cohen, the terms on which we live with large- and small-scale works of art are tightly bound up with those on which we live with each other and with ourselves; his book is as much a contribution to ethics as to aesthetics."—David Hills, Stanford University