In the graveyard of economic ideology, dead ideas still stalk the land. 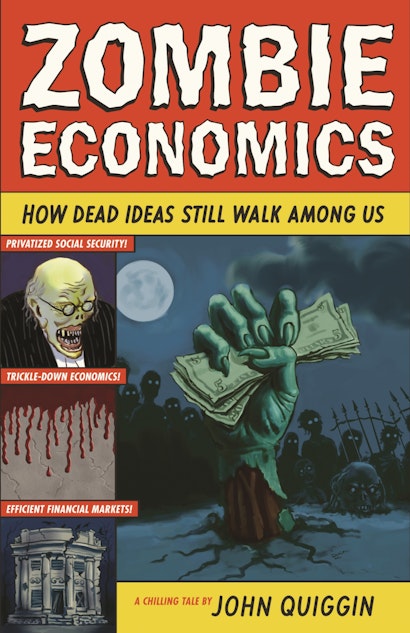 The recent financial crisis laid bare many of the assumptions behind market liberalism—the theory that market-based solutions are always best, regardless of the problem. For decades, their advocates dominated mainstream economics, and their influence created a system where an unthinking faith in markets led many to view speculative investments as fundamentally safe. The crisis seemed to have killed off these ideas, but they still live on in the minds of many—members of the public, commentators, politicians, economists, and even those charged with cleaning up the mess. In Zombie Economics, John Quiggin explains how these dead ideas still walk among us—and why we must find a way to kill them once and for all if we are to avoid an even bigger financial crisis in the future.

Zombie Economics takes the reader through the origins, consequences, and implosion of a system of ideas whose time has come and gone. These beliefs—that deregulation had conquered the financial cycle, that markets were always the best judge of value, that policies designed to benefit the rich made everyone better off—brought us to the brink of disaster once before, and their persistent hold on many threatens to do so again. Because these ideas will never die unless there is an alternative, Zombie Economics also looks ahead at what could replace market liberalism, arguing that a simple return to traditional Keynesian economics and the politics of the welfare state will not be enough—either to kill dead ideas, or prevent future crises.

In a new chapter, Quiggin brings the book up to date with a discussion of the re-emergence of pre-Keynesian ideas about austerity and balanced budgets as a response to recession.

John Quiggin is professor of economics at the University of Queensland in Australia. 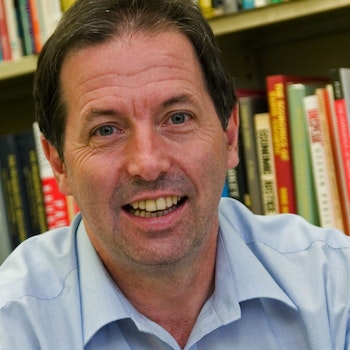 "Entertaining and thought-provoking. . . . Works as a good summary for non-specialists of how the economics debate has developed."—Philip Coggan, Economist

"Lucid, lively and loaded with hard data, passionate, provocative and . . . persuasive. . . . [Zombie Economics] should be required reading, even for those who aren't Keynesians or Krugmaniacs."—Glenn C. Altschuler, Barron's

"The financial crisis has disproved many cherished tenets of 'market liberalism', such as the 'Efficient Markets Hypothesis', yet these zombie ideas still shamble through newspapers and journals. Enter economist Quiggin, calmly wielding dual shotguns to blast them relentlessly in the face. . . . As Quiggin explains with elegance, lucidity and deadpan humour, the undead ideas here are interconnected: killing one causes it to knock over another in a sort of zombie-dominoes effect."—The Guardian

"Quiggin is a writer of great verve who marshals some powerful evidence."—Financial Times

"A highly readable and sobering assessment of the role played by discredited economic ideas in the global financial and economic meltdown of 2008-09. Quiggin delves deeply into the origins and development of all the star culprits so loved by the economic right in recent decades: from the efficient markets hypothesis to privatization and Real Business Cycle Theory. None has stood up to the stern test posed by real markets and economies in crisis. Yet most live on, still featured in many curriculums and advocated by those academics who have staked their careers on them."—Globe and Mail

"It's hard to resist a book called Zombie Economics, and University of Queensland professor John Quiggin makes his tale as compelling as his title. . . . It's the rare read that's both thoughtful and fun."—Biz Ed Magazine

"Apparently some economists have a sense of humor, dismal though it may be. Quiggin uses the 2008 global financial crisis as the focal point for examining five core macroeconomic and financial theories that have been—to use zombie terminology—killed by our current predicament. . . . Economics students and interested lay readers will find this valuable."—Library Journal

"Erroneous economic ideas resemble the living dead, writes John Quiggin in his smart new book Zombie Economics. They are dangerous yet impossible to kill. Even after a financial crisis buries them, they survive in our minds and can rise unbidden from the necropolis of ideology."—James Pressley, Bloomberg News

"I haven't done justice to Quiggin's book, so if you're interested in a readable exposition of the exploits of academic economists over the past 35 years I recommend it highly. It's the story of how economists forgot much of what they knew. Please, guys, don't do that again."—Ross Gittins, Sydney Morning Herald

"As well as exposing how these flawed ideas brought on the global crisis and how they live on, Quiggin offers his view on a new way forward in economic theory. It's time to bury the zombie."—Fiona Capp, The Age

"From the so-called 'great moderation' concept to the implications of the efficient markets hypothesis, Quiggin does an excellent job summarizing each zombie idea and explaining why it is discredited in a simple (but not simplistic) manner."—Choice

"Cleverly titled, with a wonderful and very un-academic cartoon cover and written without excessive jargon, Zombie Economics provides an elegant critical introduction and analysis of some of the key ideas of modern economic thought."—Satyajit Das, Naked Capitalism

"Peppered with humorous quotations, theory and history, Quiggin has assembled a compelling read about the misguided intellectual economic assumptions of the last forty years and also gives possible solutions to our current financial dilemma."—Ted Stamas, Bullfax.com

"This book is certainly a good read for anyone eager to know why it is urgent that economists come up with a socially useful body of thought or suggestions."—Shanghai Daily

"When I put on my economist's hat, I admire my field's ability to publicly hang its soiled laundry in public. I encourage my colleagues in sociology, psychology, and management to read this book and leverage it to lead to a more integrated social science and, perhaps, a more socially aware economic science"—Brent Goldfarb, Administrative Science Quarterly

"Quiggin manages to be argumentative, accurate, straight forward and convincing, while on occasion humorous. Certainly a good companion for anyone hoping to navigate the swamps of messy, and failed economic ideas."—Sarthak Shankar, Organiser

"If we're lucky, there will be more books like this one, criticizing 'market liberal' economics (neoliberalism or laissezfaire) from the left. John Quiggin . . . presents a learned and frankly social-democratic attack on market liberalism."—James G. Devine, Science & Society

"Killing vampires and werewolves is easy enough. But how does one slay economic zombies—ideas that should have died long ago but still shamble forward? Armed with nothing but the truth, John Quiggin sets about dispatching these dead ideas once and for all in this engaging book. Zombie Economics should be required reading for those who would dare reanimate the economic theories that brought us to the edge of ruin."—Brad DeLong, University of California, Berkeley

"Tempted to tangle with your libertarian uncle or your Wall Street Journal bromide-spouting coworkers? If so, this book will arm you to rebut the clever phrasemaking and slippery reasoning that has allowed dead constructs like 'trickle down economics' to soldier onward. Quiggin's clear, elegant dissection of wrongheaded notions will appeal to both lay readers and academic economists."—Yves Smith, author of ECONned: How Unenlightened Self-Interest Undermined Democracy and Corrupted Capitalism

"Zombie Economics provides a unique and comprehensive discussion of the ideas that failed during the recent financial crisis. But the book contributes much more. Its discussion of how macroeconomics developed, and the ideology that has grown up around it, is every bit as important and interesting."—Mark Thoma, University of Oregon

"This is a terrific book. Quiggin is an engaging writer, and the combination of quotations, history, theory, and hard evidence makes the book quite a page-turner."—Andrew Leigh, Australian National University