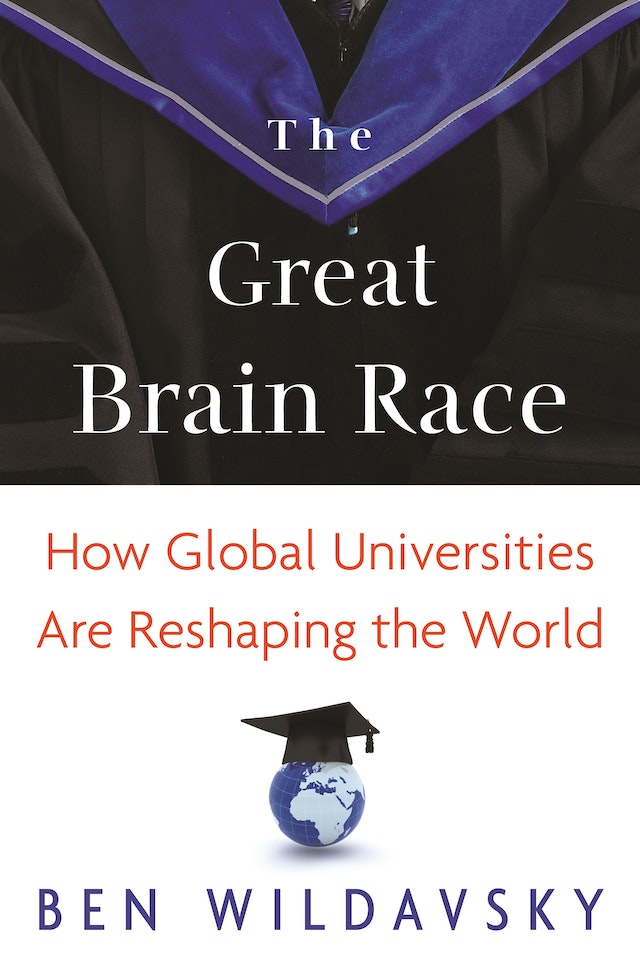 In The Great Brain Race, former U.S. News & World Report education editor Ben Wildavsky presents the first popular account of how international competition for the brightest minds is transforming the world of higher education — and why this revolution should be welcomed, not feared. Every year, nearly three million international students study outside of their home countries, a 40 percent increase since 1999. Newly created or expanded universities in China, India, and Saudi Arabia are competing with the likes of Harvard and Oxford for faculty, students, and research preeminence. Satellite campuses of Western universities are springing up from Abu Dhabi and Singapore to South Africa. Wildavsky shows that as international universities strive to become world-class, the new global education marketplace is providing more opportunities to more people than ever before.

Drawing on extensive reporting in China, India, the United States, Europe, and the Middle East, Wildavsky chronicles the unprecedented international mobility of students and faculty, the rapid spread of branch campuses, the growth of for-profit universities, and the remarkable international expansion of college rankings. Some university and government officials see the rise of worldwide academic competition as a threat, going so far as to limit student mobility or thwart cross-border university expansion. But Wildavsky argues that this scholarly marketplace is creating a new global meritocracy, one in which the spread of knowledge benefits everyone — both educationally and economically. In a new preface, Wildavsky discusses some of the notable developments in global higher education since the book was first published.

Ben Wildavsky is a senior scholar in research and policy at the Kauffman Foundation and a guest scholar at the Brookings Institution. Previously, he was education editor of U.S. News & World Report, economic policy correspondent for the National Journal, higher education reporter for the San Francisco Chronicle, and executive editor of the Public Interest. He has written for the Washington Post, the Wall Street Journal, and Foreign Policy (among other publications) and is co-editor of Reinventing Higher Education: The Promise of Innovation. He has lectured widely in the United States and abroad. 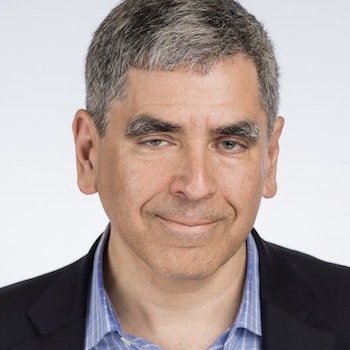 "Comprehensive and fascinating. . . . [Wildavsky] reports on American universities, notably NYU, branching out internationally; on foreign governments, like China's, spending vast sums to improve their own institutions, partly to attract scholars and students from abroad; on for-profit businesses, like Laureate and the Washington Post Co.'s Kaplan Inc., planting campuses in remote global locations. . . . This is Mr. Wildavsky's major argument. The globalization of education is producing what he calls a 'free trade in minds'—beneficial not only to countries sending their students abroad and countries accepting them but also, through positive externalities, to the broader world."—James K. Glassman, Wall Street Journal

"Academic globalisation has gone into overdrive in the modern university. Some of this is along familiar lines—academics collaborating with ever more foreign colleagues and sabbatical-seekers contriving to spend ever more time abroad. But Mr. Wildavsky demonstrates that globalisation is now much more complicated than just cross-border collaboration spiced up with junkets. . . . This is a fascinating story."—Economist

"Readable, fast-paced. . . . The global race to attract the top talent among both staff and students is affecting the academy across the globe. . . . As a description of the state of play on all these issues in the summer of 2009 (approximately), the book is wonderfully successful."—Sir Howard Newby, Times Higher Education

"[Wildavsky] tells an engaging story about the ways in which global universities are 'reshaping the world'. . . . [His] style is gripping and urgent. . . . His point that the forces of globalization will profoundly shape the future of higher education cannot be ignored. Not everyone will share Wildavsky's faith that a 'free trade in mind' will lead to equitable, or economically beneficial, outcomes. However, we must all grapple with his view that knowledge is a commodity, and universities, if they wish to survive, must treat it as such."—Adam R. Nelson, Nature

"Makes a compelling case for both the virtue and the inevitability of globalizing higher education. . . .[Wildavsky] paints a picture of a global higher-education landscape where porous borders and surging national aspirations are driving rapid increases in competition for students, professors, and prestige."—Kevin Carey, Chronicle of Higher Education

"As a peek into fast-evolving trends in global or transnational education that are increasingly consuming the minds of university presidents, it's extremely good, and its educated-but-breezy Atlantic style of writing, so rare in higher education books, make it a pleasure to read."—Alex Usher, Globe and Mail

"Intriguing. . . . In our comfortable spot at the top of the world's higher ed pyramid, we are ignoring one of the most powerful trends of the 21st century—a growing free trade in great minds. Wildavsky, a senior fellow in research and policy at the Kauffman Foundation, argues that this will make this era more innovative, and more prosperous, than any that human civilization has seen."—Jay Mathews, Washington Post

"Wildavsky does a fine job of giving contour to the diffuse and multifarious phenomena that comprise the ongoing globalisation of academia. . . . Wildavsky is forthright about his enthusiasm for what he calls a new 'free trade in minds', and he is refreshingly sceptical of all the knee-jerk rhetoric purporting to warn that America and other western powers are 'falling behind'."—John Gravois, National

"Wildavsky addresses all aspects of the internationalization of universities—students, faculty, branch campuses, financing, and even curricula—and contends that the combination of research and teaching, although sometimes a source of tension within universities, has been a resounding success."—Richard N. Cooper, Foreign Affairs

"Superb. . . . For educators, it's the equivalent of Friedman's The World Is Flat and carries much the same message: Higher education (and there are signs that K-12 is following behind) is no longer confined by national boundaries, much less campus walls. At least at its upper echelons, it's now an international industry, serving an international market, populated by globe-trotting people. . . . Ponder the implications. Meanwhile, read this book."—Chester E. Finn, Jr., Education Gadfly

"Wildavsky meticulously demonstrates how the competition for academic talent has gone global, with universities all over the world chasing the brightest students. . . . The Great Brain Race is a timely wake-up call."—Diana Furchtgott-Roth, Real Clear Markets

"In insightful, straightforward, and accessible writing, [Wildavsky] discusses the strategic value of universities extending their influence and brand throughout the world, noting that 'knowledge changes the world'. . . . Readers who are relatively unfamiliar with the globalization of higher education will appreciate this, while seasoned global educators will welcome its complete and compelling picture of how postsecondary education benefits a nation's livelihood and economy. A worthy addition to libraries with larger international education collections and institutions with study abroad programs and/or foreign campuses."—Elizabeth Connor, Library Journal

"Wildavsky's thoroughly researched book . . . provides a great deal of information about globalization in higher education and it raises some interesting questions. . . . The best contribution of the book is Wildavsky's vigorous argument that the increasingly open educational world is nothing to fear."—George Leef, John William Pope Center for Higher Education Policy

"The book is an excellent and thought-provoking work, one that raises many important questions about where globalized higher education will take us. . . . In the end, The Great Brain Race is very convincing: the world is a far better place when we embrace the transnational flow of people and ideas, limit the urge to engage in academic protectionism, and expand the reach of the global meritocracy."—Andrew Kelly, The American

"Wildavsky paints a comprehensive picture of a field where information is scattered and often sparse."—Mary Taylor Huber, Change

"The Great Brain Race provides thorough insight into how higher education is playing its part in today's globalized world—and the other way around. . . . Wildavsky skillfully combines information gathered first-hand (e.g. in interviews with institutional leaders), anecdotal evidence, and his own knowledge of university rankings, with a keen awareness of the scholarly debates on higher education and its developments over time. . . . Skillfully written and fast-paced, Wildavsky's contribution is an undoubted added-value to our understanding of an inevitably internationalized higher education landscape. . . . This is a timely publication—and a must—for anyone interested in making the best of today's higher education."—Leon Cremonini, Teachers College Record

"The Great Brain Race is compelling because of the breadth of evidence that Wildavsky provides to demonstrate the degree to which globalization has permeated academe. As his examples show, there is no template or roadmap to guarantee the success of an institution or nation; at the same time, there is no doubt about the changes in the academic environment, and anyone in higher education will feel their impact."—Wayne Ishikawa, Continuing Higher Education Review

"The book is a thorough work on the higher education scenario globally. It discusses the issue at micro level, detailing both sides of the story. It is undoubtedly a valuable source book on the education sector."—Vaidehi Nathan, Organiser

"What this slim volume [provides] is a highly readable introduction to and advocacy for global education."—Robin Tatu, Prism

"[Wildavsky's] background and experience in the print media business is evidently present on every page of the book: he is able to explain rather complex phenomena in popular language, he masters the skills needed to combine facts from various sources with relevant quotes . . . and he is able to organize his materials in compact chapters. . . . I would definitely recommend the book to students in higher education as a more than adequate introduction to the phenomenon."—Jeroen Huisman, Studies in Higher Education

"Wildavsky's book should be commended for striking the right balance between alarmism and complacency on Western predominance in higher education."—Garret Martin, European Affairs

"This book, to say the least, has mastered the territory."—Stephen P. Heyneman, Review of Higher Education

"The Great Brain Race makes a number of valuable contributions to the field. First, the historical emphasis provides a context to the various profiles shared. Second, the book is organized in a spiral layering of content that deepens the information provided. Finally, the book offers fresh perspectives on mobility patterns. In particular, it shows how mobile individuals influence curriculum, pedagogy, and student learning. Another interesting issue that Wildavsky raises is the shift from 'brain drain' to that of 'brain gain,' in which students return and capitalize on their transnational connections. As our world continues to be affected by global universities, this discourse is most welcome."—Rosalind Latiner Raby, Comparative Education Review

"The Great Brain Race is a very interesting book, with a review of experiences of many experiments being carried out in various countries and by universities across the globe.Those who are engaged in higher education business at global level could find the book extremely perceptive, insightful and engaging."—Jandhyala B.G. Tilak, Journal of Educational Planning & Administration

"The Great Brain Race takes the reader to university campuses around the globe in order to powerfully make the case that open borders are as—and perhaps more—important in education as they are in trade and economics. You can't understand the way the world will work in this coming century without understanding the phenomenon Wildavsky reveals here. The Great Brain Race is an enormous contribution to the discussion."—Judy Woodruff, PBS Newshour

"Ben Wildavsky has given us the most thorough and penetrating account to date of how globalization is transforming higher education around the world. The details are rich and compelling, and Wildavsky's judgments are, in my opinion, unerring."—Richard C. Levin, president, Yale University

"In this masterful account, Ben Wildavsky documents the emergence of a global academic marketplace that will inevitably kindle protectionist anxieties in the established powers—but that will also spur research and innovation, boost economic growth, and solidify meritocratic values in emerging nations. At last this aspect of globalization gets the attention it deserves."—Sebastian Mallaby, Council on Foreign Relations

"No leader in a global business can ignore the increasingly international brain exchange that this book describes. Wildavsky convincingly contends that the spread of academic excellence internationally and a free trade in minds is to be celebrated rather than feared. This is a must read for anyone in the global race for talent."—Andrew Witty, CEO of GlaxoSmithKline

"Ben Wildavsky has written an engaging primer on the world of international higher education."—Philip G. Altbach, Director of the Center for International Higher Education, Boston College