A compelling new look at the role of today's international courts 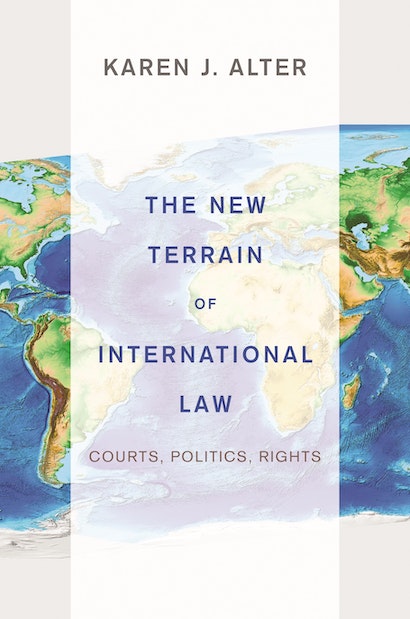 In 1989, when the Cold War ended, there were six permanent international courts. Today there are more than two dozen that have collectively issued over thirty-seven thousand binding legal rulings. The New Terrain of International Law charts the developments and trends in the creation and role of international courts, and explains how the delegation of authority to international judicial institutions influences global and domestic politics.

Karen J. Alter is professor of political science and law at Northwestern University and a permanent visiting professor at the iCourts Center of Excellence, University of Copenhagen School of Law. She is the author of Establishing the Supremacy of European Law and The European Court's Political Power.

"This pathbreaking book illuminates a quiet revolution that has reshaped international law, and it will change many readers' views about the new global legal system. . . . She masterfully demonstrates how, as the idea of global governance takes root, governments increasingly take pains to be seen as following the law—a development that has greatly increased the power of international courts and judges."—Foreign Affairs

"Alter argues that most observers have failed to comprehend the vast number of international courts and similar adjudicatory methods leading to numerous binding judgments regarding economic disputes, human rights, and criminal law. Tracking these developments in a clear and systematic way, she concludes that there is a zone of international relations governed by the rule of law."—Choice

"In The New Terrain of International Law: Courts, Politics, Rights, Karen Alter provides the most ambitious, comprehensive, and successful analysis of this new world of international courts and the impact they have exerted on international and domestic law and politics."—Mark Pollack, Perspectives on Politics

"Alter's book elicits, and deserves, high praise. It is an impressive synthesis of an immense amount of new data that will provide grist for empiricists and set the standard for new work on international courts for years to come."—José E. Alvarez, American Journal of International Law

"International lawyers dislike having political scientists in their professional kitchen and political scientists often cannot conceal their disdain of 'naive' lawyers. Alter's carefully researched and insightful new book changes all that. There is no lawyer who will not become wiser from reading it, while many a political scientist will marvel at their failure to note a seismic change in the international order. Alter's voice is unique and indispensable."—J. H. H. Weiler, president of the European University Institute, Florence

"This comprehensive study places institutions at the center of the analysis and moves away from the debate about compliance that has dominated international law scholarship in recent years. Alter builds on her work on the Andean Court of Justice to examine a wide range of international tribunals, including several in the Global South, and to show the broad array of roles that these courts play. A nuanced analysis at the intersection of international law and politics."—Tom Ginsburg, University of Chicago Law School