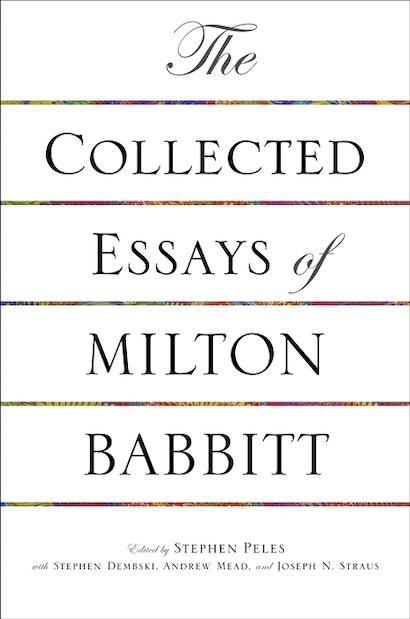 Like his compositions, Milton Babbitt’s writings about music have exerted an extraordinary influence on postwar music and thinking about music. In essays and public addresses spanning fifty years, Babbitt has grappled profoundly with central questions in the composition and apprehension of music. These writings range from personal memoirs and critical reviews to closely reasoned metatheoretical speculations and technical exegesis. In the history of music theory, there has been only a small handful of figures who have produced work of comparable stature. Taken as a whole, Babbitt’s writings are not only an invaluable testimony to his thinking — a priceless primary source for the intellectual and cultural history of the second half of the twentieth century — but also a remarkable achievement in their own right.


Prior to this collection, Babbitt’s writings were scattered through a wide variety of journals, books, and magazines — many hard to find and some unavailable — and often contained typographical errors and editorial corruptions of various kinds. This volume of almost fifty pieces gathers, corrects, and annotates virtually everything of significance that Babbitt has written. The result is complete, authoritative, and fully accessible — the definitive source of Babbitt’s influential ideas.

"A car won't run unless it's engineered correctly, and the same applies to a piece of music. And Babbit always insists that the whole point of structure in music is that it can be heard: you may have to listen at full stretch, but it will be worth it. Rather like this book—difficult stuff, but intellectually rigorous and undeniably honest."—Martin Cotton, BBC Music Magazine

"It's the book's role as an encapsulation of Babbitt's formalistic way of thinking about music which matters, and this is rendered suitably ambiguous by an intriguing disparity in the types of essay included. These veer between the extremes of the coolly technical and the warmly biographical (and autobiographical). We might not get Babbitt's views on what compositions represent in terms of emotion or feeling, but there is plenty of vivid characterization when it comes to people and places."—Arnold Whittall, Musical Times

"Milton Babbitt's musical world is not a simple one. . . . That's also true of Babbitt's written output. . . . But it's witty too, as you'd expect from the composer of such titles as Joy Of Sextets."—Andy Hamilton, The Wire

"Milton Babbitt, at eighty-nine, has been handsomely, if belatedly, served by this collection of forty-three essays testifying to his seminal presence in musical history. . . . Overall the enterprise is a fine assemblage of scattered writings which will surprise even aficionados by its range."—Jonathan Harvey, Times Literary Supplement

"The time is eminently ripe—indeed past due—for a collection of the writings of Milton Babbitt."—Elaine Barkin, University of California, Los Angeles

"Babbitt is one of the principal makers of postwar musical thought and expression, whose importance for musical composition, theory, and pedagogy in the United States is beyond that of any other individual. This anthology of his writings will stand as a major monument of late twentieth-century musical thought and history."—Benjamin Boretz, Bard College

"Milton Babbitt's influence on American musical composition has been both enormously significant and highly controversial—two excellent reasons for assembling his writings, previously scattered and difficult to locate, into a single volume. Anyone studying or writing about twentieth-century music—in its technical, philosophical, or sociological aspects—will have to deal with parts or all of this invaluable collection."—David Hamilton, The Julliard School