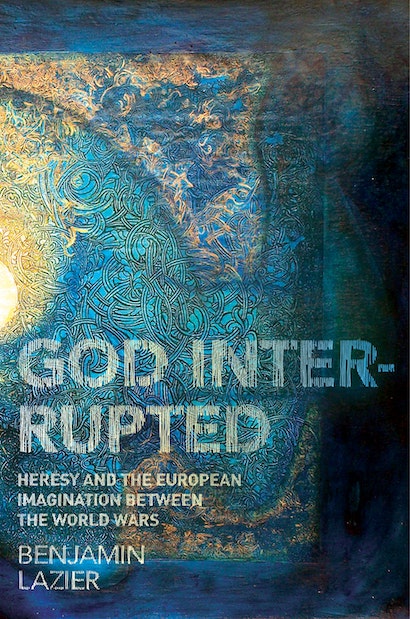 Could the best thing about religion be the heresies it spawns? Leading intellectuals in interwar Europe thought so. They believed that they lived in a world made derelict by God’s absence and the interruption of his call. In response, they helped resurrect gnosticism and pantheism, the two most potent challenges to the monotheistic tradition. In God Interrupted, Benjamin Lazier tracks the ensuing debates about the divine across confessions and disciplines. He also traces the surprising afterlives of these debates in postwar arguments about the environment, neoconservative politics, and heretical forms of Jewish identity. In lively, elegant prose, the book reorients the intellectual history of the era.

God Interrupted also provides novel accounts of three German-Jewish thinkers whose ideas, seminal to fields typically regarded as wildly unrelated, had common origins in debates about heresy between the wars. Hans Jonas developed a philosophy of biology that inspired European Greens and bioethicists the world over. Leo Strauss became one of the most important and controversial political theorists of the twentieth century. Gershom Scholem, the eminent scholar of religion, radically recast what it means to be a Jew. Together they help us see how talk about God was adapted for talk about nature, politics, technology, and art. They alert us to the abiding salience of the divine to Europeans between the wars and beyond — even among those for whom God was long missing or dead.

Benjamin Lazier is assistant professor of history and humanities at Reed College. He is a recipient of the 2008 John Templeton Award for Theological Promise.

"Elegant. . . . Heresies, Lazier argues, represented an object of interest and inspiration. Yet his finely wrought analyses demonstrate that while all his subjects were indeed fascinated by the issues these heresies raised, they were less a source of inspiration than challenges in need of resistance, reworking, and overcoming."—Steven E. Aschheim, Times Literary Supplement

"God Interrupted is intellectual history of a high order: eye-opening, skillfully wrought, rich in implication and touched with literary flair. . . . [I]n writing of a pivotal moment in modern theology's history and its reverberations, he has not only made his case for its wide historical significance but also crafted a book that provoke those still struggling to determine the amplitude and frequency of the God's oft-interrupted call."—Robert Westbrook, Christian Century

"The brilliant scholar Benjamin Lazier makes a convincing case that two religious heresies exerted far-reaching influence on Weimar-era thought well beyond the confines of religion. . . . Lazier navigates the eddies and tributaries of these intellectual currents with astonishing clarity, erudition, confidence, and wit. This book is a landmark, a tour de force of both synthesis and original thought."—Jewish Book World

"What Commonweal readers would find most rewarding about . . . Lazier's intellectual history is that [it] succeed[s] in giving a sense of the organic environment . . . in which the philosopher's intellectual life was rooted and from which it richly sprang. For the same reason, Commonweal readers might also find [this] book somewhat disturbing, for [it] serve[s] as [a] reminder of a deep anti-Semitism that, as the recent controversy over Pope Benedict's rehabilitation of the Society of St. Pius X indicated, has not been entirely uprooted from Christianity to this day."—Bernard G. Prusak, Commonweal

"It is quite the conceptual task to bring together these three seemingly disparate thinkers under a coherent conceptual roof. The way that the gnosticism-pantheism dialectic threads together these three thinkers is impressive. It is perhaps no surprise that Lazier received the 2008 Templeton Award for Theological Promise."—Clarence W. Joldersma, Perspectives on Science and Christian Faith

"This rich and informative intellectual history is a compelling challenge to historians to take theology seriously by convincingly arguing for the importance of the theology of heresy . . . for a comprehensive understanding of these three scholars' life and work. . . . Grippingly persuasive."—Yotam Hotam, Journal of Modern History

"This book is highly recommended for those who want to catch a theological-philosophical glimpse into the challenges faced by those who lived during the interwar period."—Wessel Bentley, Studia Historiae Ecclesiasticae

"God Interrupted is a disciplinary miracle, a union of history, philosophy, and theology into a new form of illumination. Lazier is a sure-footed guide through the thought of Hans Jonas, Leo Strauss, and Gershom Scholem, three of the twentieth century's most intrepid explorers of the relationship between faith and reason. He is also a profoundly original thinker who teaches us how to ask their basic questions about the relationship between man, God, and the universe in ways appropriate to our own de-secularizing age. As lucid as it is lyrical, this marvelous book is essential reading for anyone concerned with the choices that seem to confront us today, between political science or political theology, liberalism or theocracy, reason or revelation."—David Nirenberg, Committee on Social Thought, University of Chicago

"Benjamin Lazier makes a compelling case, in lucid and lively style, for the centrality of gnosticism and pantheism in European thought between the two wars and for decades afterward. This book will establish him as a major authority in modern intellectual history."—Robert Alter, University of California, Berkeley

"God Interrupted is a work of an unusual talent. The analysis is brilliant; virtually each page sparkles with novel insights."—Paul Mendes-Flohr, University of Chicago Divinity School

"This is a fascinating and highly original look at the return in interwar German-Jewish thought of certain heretical tendencies of the Jewish past. In part a study of political theology, in part a study of 'modern heresy,' Lazier's book exhibits a capaciousness and creativity that will no doubt transform the way we think about the place of religion in modern intellectual history."—Peter Gordon, Harvard University

"God Interrupted tells a fascinating story about three Weimar Jewish intellectuals—Hans Jonas, Leo Strauss, and Gershom Scholem—and their significance for understanding the trope of heresy in interwar Europe. This has the potential to be the most important book on theology in Weimar Germany."—Leora Batnitzky, Princeton University