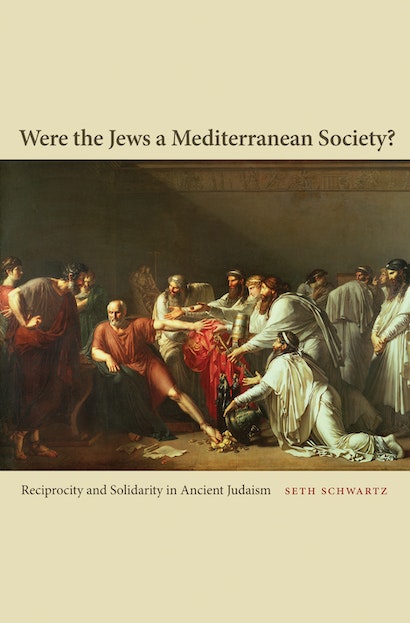 How well integrated were Jews in the Mediterranean society controlled by ancient Rome? The Torah’s laws seem to constitute a rejection of the reciprocity-based social dependency and emphasis on honor that were customary in the ancient Mediterranean world. But were Jews really a people apart, and outside of this broadly shared culture? Were the Jews a Mediterranean Society? argues that Jewish social relations in antiquity were animated by a core tension between biblical solidarity and exchange-based social values such as patronage, vassalage, formal friendship, and debt slavery.


Seth Schwartz’s examinations of the Wisdom of Ben Sira, the writings of Josephus, and the Palestinian Talmud reveal that Jews were more deeply implicated in Roman and Mediterranean bonds of reciprocity and honor than is commonly assumed. Schwartz demonstrates how Ben Sira juxtaposes exhortations to biblical piety with hard-headed and seemingly contradictory advice about coping with the dangers of social relations with non-Jews; how Josephus describes Jews as essentially countercultural; yet how the Talmudic rabbis assume Jews have completely internalized Roman norms at the same time as the rabbis seek to arouse resistance to those norms, even if it is only symbolic.

Were the Jews a Mediterranean Society? is the first comprehensive exploration of Jewish social integration in the Roman world, one that poses challenging new questions about the very nature of Mediterranean culture.

Seth Schwartz is the Lucius N. Littauer Professor of Classical Jewish Civilization and professor of religion at Columbia University. He is the author of Imperialism and Jewish Society, 200 BCE to 640 CE (Princeton) and Josephus and Judaean Politics.

"Schwartz has a cogent voice worthy of profound attention in any dialogue concerning Jewish relations with the Hellenistic-Roman world. . . . Schwartz offers a close, very revealing analysis of the Hellenistic Jewish author Jesus Ben Sira and a refreshingly unorthodox discussion of that literary trickster Josephus. His analysis of Talmudic texts is persuasive."—Choice

"[T]here can be no doubt that Schwartz's book is essential reading for anyone working in the field. The attempt to answer two big questions at once is laudable, the analysis is carefully done, and the conclusions are complex. We need more studies operating on such a high level of abstraction."—Benedikt Eckhardt, Bryn Mawr Classical Review

"[T]he late Keith Hopkins—to whose memory this book is dedicated—would have enjoyed the combination of originality, erudition, theoretical sophistication, and refusal to accept accepted wisdoms that are evident on almost every page of this book."—Gideon Bohak, Shofar

"[H]owever one responds to any individual point in this book, Schwartz forces us to think and to view the familiar evidence from new perspectives. For this, his reader is in his debt."—Albert I. Baumgarten, Scripta Classica Israelica

"As is characteristic of Schwartz's scholarship, this book will prompt scholarly debate. I have learned much from it at the same time that it has raised questions with which I will wrestle long after having written this review."—Benjamin G. Wright, Journal of Jewish Studies

"[T]his is a book from which a reader could learn a great deal about Ben Sira, Josephus, the rabbis, and methods for approaching the study of Jews in the Roman world. Due to the technical nature of some of its arguments, it is most likely to be of use to PhD students and scholars, though its prose is readable enough that it might be used with master's-level students and perhaps even advanced undergraduates."—Eric C. Stewart, Journal of the American Academy of Religion

"Schwartz has presented a masterful study on the integration of the Jews in Greek and Roman culture. Although it is aimed primarily at specialists, advanced students will also learn from his well articulated methodology and his careful reading of select texts. . . . Schwartz has . . . provided an important contribution to, and essential reading for, understanding Jewish integration in the Greco-Roman period."—Ronald A. Simkins, Biblical Theology Bulletin

"Schwartz's book is essential reading for specialists in Ben Sira, Josephus and rabbinic values, and useful reading for everyone interested in social-scientific approaches to antiquity. In a country like Finland, where the studies of Judaism and of classical antiquity have been largely separated, approaches like Schwartz's are much needed."—Lotta Valve, ARCTOS

"[An] engaging study."—Eric C. Stewart, Journal of the American Academy of Religion

"There are very few books that combine grand ambition with careful and skeptical scholarship as successfully as this wonderfully provocative book. Seth Schwartz takes on the very biggest question of Second Temple Judaism: how different were the Jews from the Greco-Roman society in which they lived? And he does so with sharp sophistication and profound learning."—Simon Goldhill, University of Cambridge

"An important consideration of some vital questions in the study of Judaism in the Hellenistic period and late antiquity by one of its most original, well-informed, and intellectually rigorous historians. This book offers a new perspective on this formative period in Jewish history and will be much discussed."—Michael D. Swartz, Ohio State University

"An original, interesting, and important book. Schwartz advances his arguments with much learning and methodological sophistication. I have no doubt whatever that this book will attract much notice."—Martin Goodman, University of Oxford