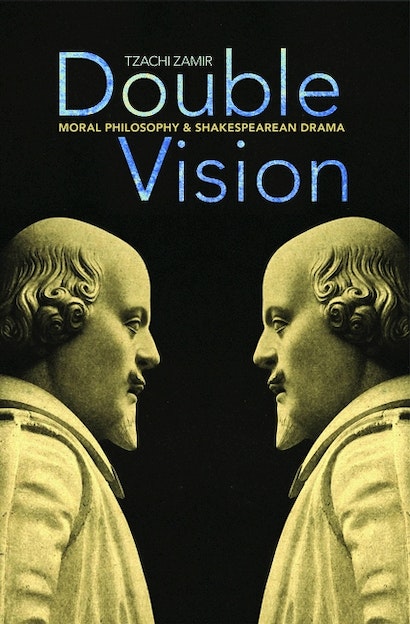 Double Vision is concerned with the philosophical understanding induced by the aesthetic experience of literature. Literary works can function as credible philosophical arguments — not ones in which claims are conclusively demonstrated, but in which claims are made plausible. Such claims, Zamir argues, are embedded within an experiential structure that is itself a crucial dimension of knowing. Developing an account of literature’s relation to knowledge, morality, and rhetoric, and advancing philosophical-literary readings of Richard III, Macbeth, Romeo and Juliet, Othello, Antony and Cleopatra, Hamlet, and King Lear, Zamir shows how his approach can open up familiar texts in surprising and rewarding ways.

Tzachi Zamir holds a doctorate in philosophy and is Assistant Professor of Comparative Literature and English at the Hebrew University of Jerusalem. He has published a number of essays on the relations between philosophy and literature.

"Zamir writes as someone capable of being puzzled, capable of delving into the painful or exhilarating depths of certain problems with Shakespeare as his guide rather than his pupil. Double Vision is quite a brilliant book. . . . Double Vision owes its success precisely to this capacity for philosophical puzzlement, for laying the plays newly open both to emotional experience and to serious reflection."—Martha Nussbaum, The New Republic

"Zamir . . . here shows how philosophy needs Shakespeare. Indeed, his pages on Macbeth bring the philosophy of nihilism alive while attending to the particularities of the text. . . . This book should have a readership beyond schools where one may hope it becomes required reading."—Tom D'Evelyn, Providence Journal

"Zamir's book is an intelligent and provocative justification for how literary rhetoric can articulate and test moral belief. He writes with the economy and power of one well-versed in contemporary analytic philosophy, and he offers an impressive grasp of Renaissance drama and classical literature."—Charles Alteieri, British Journal of Aesthetics

"An extraordinary book. The general philosophy of literature in Part I, 'Philosophical Criticism in Theory,' is as nuanced, careful, and comprehensive in treating philosophical theories of the value and significance of literature (cognitive and moral) as anything in the professional literature. Part II, 'Philosophical Criticism in Practice,' consisting of seven chapters, each on an individual play of Shakespeare's, is profound."—Richard Eldridge, Swarthmore College, Iyyun

"Tzachi Zamir's Double Vision: Moral Philosophy and Shakespearean Drama is a thoughtful and impressive book about literature's connection to moral knowledge. Of particular note is Double Vision's double objective: it is both a work about our ethical engagement with literature and a work that engages us ethically with literature."—Stephanie Partridge, The Journal of Aesthetics and Art Criticism

"Young philosopher Tzachi Zamir's Double Vision . . . stands head and shoulders above its rivals in the enterprise of doing philosophy by consulting works of literature."—Martha C. Nussbaum, The Australian

"I have only admiration for the honesty of Zamir's readings and for the remarkable intelligence of his project. Double Vision is beautifully written, moving, witty, and convincing. The arguments presented are complex and subtle, but the reasoning is lucid. Great care has been taken here to avoid the kind of obscurity one often finds in theoretical treatments of literary questions. It will have enormous value for teachers of Shakespeare and for the artists who perform his works on stage. It should have even greater value for scholars and critics."—Michael D. Bristol, Shakespeare Studies

"Double Vision remains one of the most important considerations of the relationship between philosophy and Shakespeare's drama since Stanley Cavell's Disowning Knowledge. Even those who are confirmed in their suspicion of the claims of philosophy regarding literature and their commitment to historicism should open themselves to the canniness of its arguments and the originality of its engagement with Shakespeare."—David Schalkwyk, European Legacy

"This is the best book on the relationship between philosophy and literature that I have seen in a long time. The philosophical analysis is cogent and extensive, offering much more philosophical detail than most books in this line. The responses to opponents of philosophical interpretation are very imaginative and convincing. And the readings of Shakespeare are stunning in their insightfulness, textual detail, and fruitfulness for philosophical reflection."—Martha Nussbaum, University of Chicago

"This is an original and important book. I shall urge my colleagues to read it, and I look forward to citing it in my own work. His readings of Shakespeare will be of great value to literary critics, and I think will help to sell literature to philosophers."—William Flesch, Brandeis University