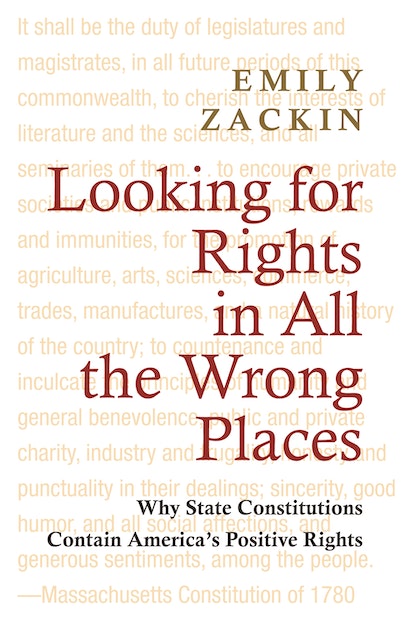 Unlike many national constitutions, which contain explicit positive rights to such things as education, a living wage, and a healthful environment, the U.S. Bill of Rights appears to contain only a long list of prohibitions on government. American constitutional rights, we are often told, protect people only from an overbearing government, but give no explicit guarantees of governmental help. Looking for Rights in All the Wrong Places argues that we have fundamentally misunderstood the American rights tradition. The United States actually has a long history of enshrining positive rights in its constitutional law, but these rights have been overlooked simply because they are not in the federal Constitution.


Emily Zackin shows how they instead have been included in America’s state constitutions, in large part because state governments, not the federal government, have long been primarily responsible for crafting American social policy. Although state constitutions, seemingly mired in trivial detail, can look like pale imitations of their federal counterpart, they have been sites of serious debate, reflect national concerns, and enshrine choices about fundamental values. Zackin looks in depth at the history of education, labor, and environmental reform, explaining why America’s activists targeted state constitutions in their struggles for government protection from the hazards of life under capitalism.


Shedding much-needed light on the variety of reasons that activists pursued the creation of new state-level rights, Looking for Rights in All the Wrong Places challenges us to rethink our most basic assumptions about the American constitutional tradition.

"This is an excellent contribution to the literature and yet another compelling reason that scholars should not limit themselves to only the federal Constitution and courts."—Choice

"I am hopeful that Zackin's thoughtful and timely book will invigorate the debate, reminding readers along the way of the vibrant role states have played, and should continue to play, in defining new statutory and constitutional rights. Whether 'we want more' rights or not, we would be lucky to have more scholarship from Zackin about the states' essential role in the American constitutional law tradition."—Jeffrey S. Sutton, Harvard Law Review

"Emily Zackin argues that the United States has a long history of positive rights protection, created and fostered by political outsiders who wanted to change society and disrupt the status quo. We will find this tradition not in the federal constitution, but in our country's many state constitutions. This is a crucially important book revealing an unjustly neglected feature of America's constitutional traditions."—Jack M. Balkin, Yale Law School

"This is an extremely important book that will be widely discussed. One of the pathologies of the standard approach to American constitutionalism is its exclusive focus on the U.S. Constitution and the concomitant ignorance of the rich materials to be found in the literally dozens of American state constitutions. This book will be an extremely important wake-up call for most readers."—Sanford Levinson, author of Constitutional Faith

"This splendid book single-handedly establishes positive rights as core elements of the American constitutional tradition. Using a comparative case study of rights in education, labor, and the environment, Zackin overturns conventional wisdom by documenting a rich legacy of positive rights in state constitutions. Looking for Rights in All the Wrong Places is provocative, important, and persuasively argued."—Charles R. Epp, author of Making Rights Real: Activists, Bureaucrats, and the Creation of the Legalistic State