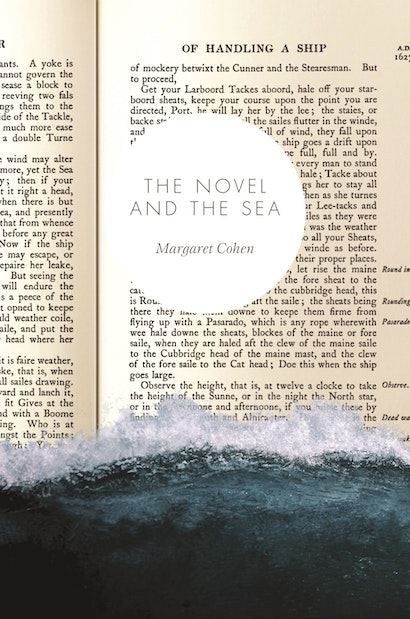 For a century, the history of the novel has been written in terms of nations and territories: the English novel, the French novel, the American novel. But what if novels were viewed in terms of the seas that unite these different lands? Examining works across two centuries, The Novel and the Sea recounts the novel’s rise, told from the perspective of the ship’s deck and the allure of the oceans in the modern cultural imagination. Margaret Cohen moors the novel to overseas exploration and work at sea, framing its emergence as a transatlantic history, steeped in the adventures and risks of the maritime frontier.

Cohen explores how Robinson Crusoe competed with the best-selling nautical literature of the time by dramatizing remarkable conditions, from the wonders of unknown lands to storms, shipwrecks, and pirates. She considers James Fenimore Cooper’s refashioning of the adventure novel in postcolonial America, and a change in literary poetics toward new frontiers and to the maritime labor and technology of the nineteenth century. Cohen shows how Jules Verne reworked adventures at sea into science fiction; how Melville, Hugo, and Conrad navigated the foggy waters of language and thought; and how detective and spy fiction built on sea fiction’s problem-solving devices. She also discusses the transformation of the ocean from a theater of skilled work to an environment of pristine nature and the sublime.

A significant literary history, The Novel and the Sea challenges readers to rethink their land-locked assumptions about the novel.

Margaret Cohen teaches in the Department of Comparative Literature at Stanford University, where she holds the Andrew B. Hammond Chair of French Language, Literature, and Civilization. She is the author of Profane Illumination and The Sentimental Education of the Novel.

"In her bracing, often scintillating book about the associations of prose fiction and the ocean since the early eighteenth century, Margaret Cohen laments that critics have themselves tended not to trouble readers with the details of adventures at sea. . . . [H]er revisionist account is much needed."—Matthew Beaumont, Times Literary Supplement

"[M]any . . . texts touched on or explored at length in The Novel and the Sea receive equal, illuminating, and masterful treatment as individual representatives of the many genres of the maritime book. Further, that treatment is less interpretation than searching description. Bringing to bear a historically specific and technical lexicon, Cohen restores these texts' legibility. Practicing a form of so-called surface reading more interested in what the texts forthrightly say than in what they conceal, she renews their pertinence. No critic could hope to do more."—Cannon Schmitt, Victorian Studies

"Lucid, original, and steeped in references both scholarly and popular, this book will particularly delight those who love the sea."—Choice

"Cohen's breadth and depth of research is immense, even awe-inspiring. . . . The Novel and the Sea is a brilliant work of literary scholarship and an important book to the studies of literature of the sea."—Richard J. King, Sea History

"In The Novel and the Sea Margaret Cohen makes a compelling case for the sea novel that celebrates the thrill of adventure neglected by the 'land' novel. Maritime fiction specialists will be drawn to the book's detail, but the assessment of 'the novel' from the stimulating new perspective of the sea also appeals to a more general readership. . . . This is an invigorating assessment of representations of sailing and the sea, which occupies a carefully plotted position within this increasingly popular area of research."—Alexandra Phillips, Project Muse

"This splendid book is the first to uncover a poetics of maritime fiction. As Cohen reveals, this poetics of craft has often been ignored or misinterpreted rather than seen for what it actually is: a georgic of the sea and a labor that must be cleverly understood before it can be properly accomplished. This book makes its subtle claims in language so lucid it will please professional readers as well as the audience simply interested in novels of the sea."—Jonathan Lamb, Vanderbilt University

"With a wonderfully attentive eye to the craft of writing and sailing, Margaret Cohen lays out a bold new literary theory of practice and experience based in the world of work and things. Meticulous and enthralling, she tells us why we must go down to the sea again and again, and never tire of learning from it."—Michael Taussig, Columbia University

"You'll come away from this book with a strong sense of the cultural relevance and resonance of seafaring not only at the origins of the novel, but up through even some of its recent, persistently popular cultural incarnations. The book is beautifully written, clear, and deftly argued."—Jody Greene, University of California, Santa Cruz

"This book is bracing and exciting, an adventure in its own right. It skillfully makes its compelling case about the role played by maritime craft in the history of the adventure novel, and about the role played by adventure in the literary realm more generally. It will provoke thought, argument, and revision of some long-held truisms, especially about the importance of the novel of manners, and of psychological realism in prose forms of the modern West."—John Plotz, Brandeis University