A new vision for the American world order 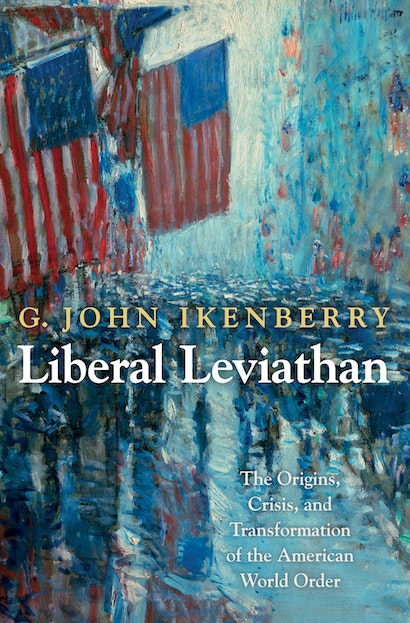 In the second half of the twentieth century, the United States engaged in the most ambitious and far-reaching liberal order building the world had yet seen. This liberal international order has been one of the most successful in history in providing security and prosperity to more people. But in the last decade, the American-led order has been troubled. Some argue that the Bush administration, with its war on terror, invasion of Iraq, and unilateral orientation, undermined this liberal order. Others argue that we are witnessing the end of the American era. Liberal Leviathan engages these debates.

G. John Ikenberry argues that the crisis that besets the American-led order is a crisis of authority. A political struggle has been ignited over the distribution of roles, rights, and authority within the liberal international order. But the deeper logic of liberal order remains alive and well. The forces that have triggered this crisis—the rise of non-Western states such as China, contested norms of sovereignty, and the deepening of economic and security interdependence—have resulted from the successful functioning and expansion of the postwar liberal order, not its breakdown. The liberal international order has encountered crises in the past and evolved as a result. It will do so again.

Ikenberry provides the most systematic statement yet about the theory and practice of the liberal international order, and a forceful message for policymakers, scholars, and general readers about why America must renegotiate its relationship with the rest of the world and pursue a more enlightened strategy—that of the liberal leviathan.

G. John Ikenberry is the Albert G. Milbank Professor of Politics and International Affairs at Princeton University. His books include After Victory: Institutions, Strategic Restraint, and the Rebuilding of Order after Major Wars (Princeton).

"International orders guide how major powers interact with one another and with less powerful states: how they cooperate and compete in trade and security and when and why they respect one another's sovereignty. Ikenberry's important book tackles this complex subject, giving readers a deep understanding of the factors that determine the type of international order. . . . Liberal Leviathan is a valuable guide to understanding the factors that will determine its eventual shape."—Foreign Affairs

"This is a valuable work of international relations theory."—Choice

"Liberal Leviathan is a great review of the state of the art of broad and narrow Realist and liberal theories being discussed in American academia."—César de Prado, International Affairs

"His book lucidly explains how the end of the Cold War allowed the U.S.-dominated Western system to expand to the rest of the world. Ikenberry's account has an intuitive appeal. There's always more than enough chaos to argue that the world is in crisis . . . he writes thoughtfully about the challenge of integrating rising powers into global governance. . . . As a clear and informed synthesis of the existing scholarship on global governance, this book is a success."—David Bosco, American Prospect

"Ikenberry's book is a cogently developed argument that builds upon his previous writings and will be a point of reference for the 'international liberal' literature."—Jakub J. Grygiel, Claremont Review of Books

"[T]he sheer breadth of the work, the clarity of the presentation . . . and the synthesis of an extraordinary amount of theoretical and historical literature will make the volume an important resource for students and scholars for a very long time."—James M. McCormick, Perspectives on Politics

"Ikenberry impresses with his range of concerns, by his drive to formulate clear and parsimonious propositions about interstate relations, and by the pains he takes to express himself with clarity and precision. He announces his lines of argument, develops them, repeats them, and for good measure cross references them."—Michael H. Hunt, Political Science Quarterly

"The book elaborates on how America crafted and created 'cooperative security'—arguably the most important innovation in national security in the 20th century."—Wang Yong, Shanghai Daily

"Nobody has thought longer or deeper about the nature of the American liberal world order than John Ikenberry. Tough-minded yet visionary and optimistic, this inspirational volume should become required reading for all those tasked with the great responsibility of steering us to safety through the very choppy international waters into which we are now heading."—Michael Cox, London School of Economics and Political Science

"Liberal Leviathan traces the intimate connections between the emergence of a largely liberal international system and the concentration of global power in the United States in the twentieth century. The marriage of power and principle in the United States has been central to the emergence of the liberal order, but Ikenberry shows that it is also corrosive of that order. As a consequence both of U.S. foreign policy activism and gradual shifts in the distribution of world power, the liberal order faces significant new challenges. This book traces alternative paths through which these challenges might be met."—Barry Posen, Massachusetts Institute of Technology

"Liberal Leviathan offers a masterful deliberation on American power, international change, and the global order. It will no doubt take its place as a seminal volume in international relations, one that helps define the debate about emerging changes in the global distribution of power. I can think of few volumes comparable in their conceptual clarity and ambition. A must-read."—Charles A. Kupchan, author of How Enemies Become Friends: The Sources of Stable Peace

"Liberal Leviathan is an ambitious, comprehensive, and deeply learned study of the American-led international political order. I am confident that it will stand as a major and lasting contribution to scholarship and to the public conversation about United States foreign policy. This is a big and important book."—William C. Wohlforth, coauthor of World Out of Balance: International Relations and the Challenge of American Primacy