How a great enigma of astronomy was solved 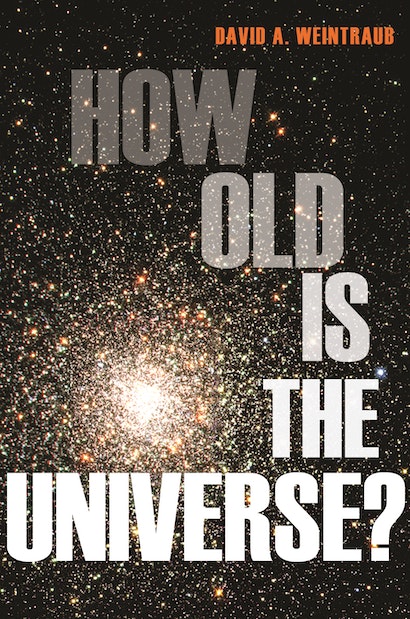 Astronomers have determined that our universe is 13.7 billion years old. How exactly did they come to this precise conclusion? How Old Is the Universe? tells the incredible story of how astronomers solved one of the most compelling mysteries in science and, along the way, introduces readers to fundamental concepts and cutting-edge advances in modern astronomy.

The age of our universe poses a deceptively simple question, and its answer carries profound implications for science, religion, and philosophy. David Weintraub traces the centuries-old quest by astronomers to fathom the secrets of the nighttime sky. Describing the achievements of the visionaries whose discoveries collectively unveiled a fundamental mystery, he shows how many independent lines of inquiry and much painstakingly gathered evidence, when fitted together like pieces in a cosmic puzzle, led to the long-sought answer. Astronomers don’t believe the universe is 13.7 billion years old—they know it. You will too after reading this book. By focusing on one of the most crucial questions about the universe and challenging readers to understand the answer, Weintraub familiarizes readers with the ideas and phenomena at the heart of modern astronomy, including red giants and white dwarfs, cepheid variable stars and supernovae, clusters of galaxies, gravitational lensing, dark matter, dark energy and the accelerating universe—and much more. Offering a unique historical approach to astronomy, How Old Is the Universe? sheds light on the inner workings of scientific inquiry and reveals how astronomers grapple with deep questions about the physical nature of our universe.

David A. Weintraub is professor of astronomy at Vanderbilt University. He is the author of Is Pluto a Planet?: A Historical Journey through the Solar System (Princeton).

"This detective story is magnificently presented. The professional astronomer-author writes in an interesting, organized, and very readable way, presenting this chronology of the quest to answer one of the most challenging questions in astronomy."—Choice

"Weintraub, an astronomer at Vanderbilt University, offers a patient tour of the new data-rich landscape."—David Kaiser, London Review of Books

"It's all very well for astronomers to say that the universe is 13.7 billion years old, but you have to wonder just how they figured that out. Vanderbilt University astronomer Weintraub (Is Pluto a Planet?) explains it all for astronomy buffs in an enthusiastic way. . . . Weintraub guides readers on a winding journey through history, explaining various dating approaches and illustrating the determination of astronomers to find the answer to one of the most basic questions about our universe."—Publishers Weekly

"Weintraub explains . . . how we know that the Universe is 13.7 billion years old, a finding that has had an impact on science, philosophy and religion. By looking at the various ways in which the age of the cosmos has been established over the centuries—from the lifecycles and pulsations of stars to galactic structures and cosmology—he reveals the process of scientific enquiry and shows how astronomers gather evidence to grapple with deep questions."—Nature

"Weintraub has a gift for presenting complicated matters in a lucid and understandable way by employing clever analogies. . . . How Old Is the Universe? is a welcome contribution to the popular literature on astronomy. . . . It offers a scientifically competent and impressively informative account of how astronomers and physicists have unveiled the secrets of the universe."—Helge Kragh, American Scientist

"Telling the story of how one fundamental scientific question has developed over the last 2,000 years of human history is a daunting task. Yet it's one that David Weintraub has risen to admirably. . . . Weintraub's journey neatly introduces you to almost all of modern astronomical understanding. With a style that is rich with fascinating detail, but remaining perfectly accessible."—Alastair Gunn, BBC Sky at Night Magazine

"David A. Weintraub presents a bracing, detailed, and surprisingly math-free look at how astronomers have managed to figure out that the universe is around 13.7 billion years old. . . . Weintraub's stimulating mix of history and pure science will be an excellent introduction to the topic for intrepid readers from any background."—Charlene Brusso, New York Journal of Books

"Weintraub outlines the rigorous process astronomers have followed from Earth itself out to the edge of the observable universe and makes it accessible to the science-minded lay reader. Highly recommended."—Library Journal

"You probably know the answer already. But do you know how we found it? This is no-nonsense science writing that will be enjoyed for years: David Weintraub is an expert guide, laying out the evidence with just the right amount of detail."—Michael Brooks, New Scientist

"If you really want to know the age of the universe, then you too have to start from scratch. How Old is the Universe? places the question in its proper historical context and explains what has gone into answering it. . . .What this book shows is how deduction, dedication, care and persistence in many fields have led to the figure we have today. It is the story of a scientific triumph."—Kulvinder Singh Chadha, Physics World

"This is a very engaging and readable book that will help you wrap your mind around an agreed to astronomical actuality: The universe is 13.7 billion years old. . . . [Weintraub] offers the reader a fact-filled roadmap that needed to unfold in order to answer a core question about our surrounding universe."—Leonard David, Coalition for Space Exploration

"By focusing on one of the most crucial questions about the universe and challenging readers to understand the answer, Weintraub familiarizes readers with the ideas and phenomena at the heart of modem astronomy. Offering a unique historical approach to astronomy, this book sheds light on the inner workings of scientific inquiry and reveals how astronomers grapple with deep questions about the physical nature of our universe."—Lunar and Planetary Information Bulletin

"This is a lovely book devoted to one of the most important questions in physical science. The presentation is lively and readable. General readers will enjoy it, and it could also be a text or supplementary text for general education astronomy courses."—Robert D. Joseph, Contemporary Physics

"Recommended, if you are game for a simulated journey through the enigma that is our Universe, while picking strange berries along the way."—Subhra Priyadarshini, Businessworld

"The story of this discovery is exciting, ending with the Nobel Prize, told in detail by Professor Weintraub in the book. Every question the reader may have is answered in this book. The book is written at a level understandable by people who are curious about our world but don't have a scientific background. It should serve as a source of information for people with a background in astronomy."—Milton Friedman, Montgomery News

"How Old is the Universe? walks general readers gently through each step of discovery, with Professor Weintraub—whose previous, equally inquisitive book was Is Pluto a Planet?—proving an able guide. . . . With simple, straightforward descriptions, Weintraub gives readers the equivalent of an enjoyable college astronomy course, as well as teaching the half-dozen or so ways by which we know, with great precision if not the exact time of day, the moment of the big bang."—Michael Ray Taylor, Chapter 16

"Weintraub retraces the spectacular journey in which astronomers learned the size and age of the universe. Along the way, he provides lucid explanations and ingenious analogies, such as his use of musical chairs to explain degenerate states of matter in white dwarf stars. A splendid merger of science history and cutting-edge astronomy."—Owen Gingerich, author of God's Universe

"How old is the universe? Centuries of speculation and research have culminated in a precise answer to this fundamental question. Weintraub presents the story of this major triumph of astronomy in a masterful style, rich with authoritative details and everyday analogies, illustrating along the way the full panorama of the astronomical work that led to this amazing feat."—Alan Boss, author of The Crowded Universe: The Search for Living Planets

"This is an outstanding concept for a book. By focusing on the fascinating question of the age of the universe, Weintraub ties together much of modern astrophysics in an interesting and compelling way. This is a book for general readers, but it also makes an excellent supplemental book for any college-level general astronomy course for nonscientists."—Charles Bailyn, Yale University