What Charles Darwin can teach us about building a fairer society 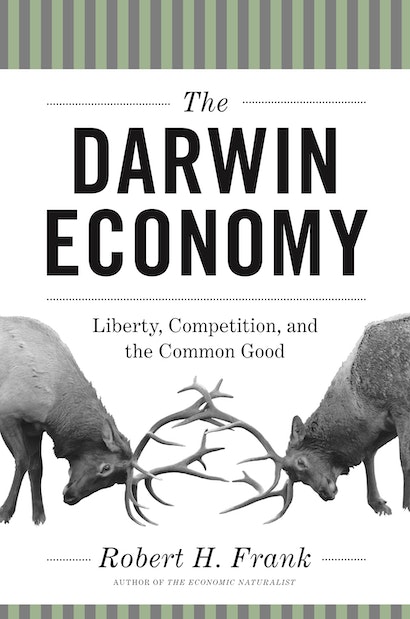 Who was the greater economist—Adam Smith or Charles Darwin? The question seems absurd. Darwin, after all, was a naturalist, not an economist. But Robert Frank, New York Times economics columnist and best-selling author of The Economic Naturalist, predicts that within the next century Darwin will unseat Smith as the intellectual founder of economics. The reason, Frank argues, is that Darwin’s understanding of competition describes economic reality far more accurately than Smith’s. And the consequences of this fact are profound. Indeed, the failure to recognize that we live in Darwin’s world rather than Smith’s is putting us all at risk by preventing us from seeing that competition alone will not solve our problems.

Smith’s theory of the invisible hand, which says that competition channels self-interest for the common good, is probably the most widely cited argument today in favor of unbridled competition—and against regulation, taxation, and even government itself. But what if Smith’s idea was almost an exception to the general rule of competition? That’s what Frank argues, resting his case on Darwin’s insight that individual and group interests often diverge sharply. Far from creating a perfect world, economic competition often leads to “arms races,” encouraging behaviors that not only cause enormous harm to the group but also provide no lasting advantages for individuals, since any gains tend to be relative and mutually offsetting.

The good news is that we have the ability to tame the Darwin economy. The best solution is not to prohibit harmful behaviors but to tax them. By doing so, we could make the economic pie larger, eliminate government debt, and provide better public services, all without requiring painful sacrifices from anyone. That’s a bold claim, Frank concedes, but it follows directly from logic and evidence that most people already accept.

In a new afterword, Frank further explores how the themes of inequality and competition are driving today’s public debate on how much government we need.

Robert H. Frank is an economics professor at Cornell's Johnson Graduate School of Management, a regular "Economic View" columnist for the New York Times, and a Distinguished Senior Fellow at Demos. His books, which have been translated into twenty-two languages, include The Winner-Take-All Society (with Philip Cook), The Economic Naturalist, Luxury Fever, What Price the Moral High Ground?, and Principles of Economics (with Ben Bernanke).

"[Frank's] arguments are carefully crafted and artfully presented to make the case that since we're in the business of designing society from top down anyway we might as well go whole hog and do it right."—Michael Shermer, Journal of Bioeconomics

"Robert Frank's The Darwin Economy . . . provide(s) much-needed information and analysis to explain why so much of the nation's money is flowing upward. Frank, an economist at Cornell, draws on social psychology to shatter many myths about competition and compensation."—Andrew Hacker, New York Review of Books

"The premise of economist Adam Smith's 'invisible hand'—a tenet of market economics—is that competitive self-interest shunts benefits to the community. But that is the exception rather than the rule, argues writer Robert H. Frank. Charles Darwin's idea of natural selection is a more accurate reflection of how economic competition works . . . because individual and species benefits do not always coincide. Highlighting reasons for market failure and the need to cut waste, Frank argues that we can domesticate our wild economy by taxing higher-end spending and harmful industrial emissions."—Nature

"[The Darwin Economy] is a smart, complex, and thoughtful book that will make many readers view the dismal science in a wholly different way."—Biz Ed

"[P]rovocative. . . . Frank is an economist for the rest of us. . . . [T]he Darwin Economy . . . focus[es] on one paradox of economic life: behavior which makes sense for a particular individual can harm the community as a whole."—Chrystia Freeland, Reuters

"Frank's worthy and unfashionable aim is to argue the economic case for some forms of government regulation, to defend taxation, and even to advocate certain forms of tax increase."—Howard Davies, Times Higher Education

"The Darwin Economy fundamentally challenges this theory of competition which, argues Frank, is a flawed way of understanding competitive forces throughout many aspects of economic life. . . . Frank adds something new to the debate. . . . [H]e offers a powerful theoretical insight into the nature of competitive economic forces and the free market. . . . [I]t is an insight we could all potentially benefit from."—Daniel Sage, LSE Politics & Policy blog

"Frank's argument is a strong critique of the neo-classical view of the market and unlike many liberal critiques, does not rely on arguments about market imperfections, dominant powers, information asymmetries or irrationality. . . . [T]he Darwin Economy provides an important argument that must be addressed by any libertarian."—Evolving Economics blog

"Frank's book is peppered with examples of how actions that improve the well-being of the individual harm the collectivity. . . . [B]rave and welcome."—Robert Kuttner, American Prospect

"The practical implications of Frank's insight are quite broad. . . . Frank manages to write breezily and with a minimum of jargon. His book deserves wide readership among people who suspect that something has gone drastically wrong with the economy."—Charles R. Morris, Commonweal

"Applying Darwin to economics provides new ways of thinking about taxation and the role of government in a free society. It also reminds economists and bankers how much they have neglected the humble wisdom with which they must confront uncertainty."—Arab News

"Frank makes a compelling argument against the libertarian view that government should not interfere with individual liberty by forcing us to buy safety or insurance, via taxation. . . . His book is a welcome addition to a field that is in need of more economists and political theorists who challenge the status quo and explore concepts of justice in the spirit of John Rawls and Michael Sandel."—ForeWord

"Reading this book will . . . provide a useful counterpoint to EU discussion about fiscal austerity and the importance of solidarity in the EU budget. Whether you start on the left or the right this book invites some re-thinking."—European Voice

"Frank is one of the most interesting economists regularly writing for the public. Serious scholars across the social sciences will learn a lot from this book."—Choice

"[T]he Darwin Economy is noteworthy for its very acrobatic devotion to some—any—model that would seem well positioned to supplant the invisible hand as the prime mover of economic life in market societies. Instead of simply noting the abundant empirical failures of free-market theorizing for what they are—and thereby placing the burden of accountability on the small-government apostles of deregulation—Frank opts for the centrist dodge of trimming the differences between the excesses of libertarian dogma on the one hand and the reflexes of an allegedly Naderite, intervention-happy left cadre of government bureaucrats on the other."—Chris Lehmann, Democracy: A Journal of Ideas

"This is an intelligent and well-written book that will certainly inspire you [to] think about economics in a different way to what you did before. . . . I think students of economics, evolutionary theory and anyone with interests in these areas will benefit greatly by reading and thinking about the arguments presented in this book."—Devorah Bennu, GrrlScientist

"This is an important book that brings together three decades of research and writing by the author to better understand the nature of our modern economy and to provide policy recommendations. . . . [Y]ou will benefit from reading this book."—Ronnie J. Phillips, Journal of Economic Issues

"I have no problems recommending The Darwin Economy especially to non-academics with an interest in economics and to undergraduate students of economics. Seasoned researchers wi1l find some of Frank's more provocative arguments of interest, but it is clearly aimed at nonexperts. Frank's book is enjoyable to read, it is insightful and insightful, and on balance it is a dear force for good amongst popular economic discourse."—Rory Fairweather, Kelvingrove Review

"In this brilliant book, Robert H. Frank does much more than remind us that taxes pay for essential public services."—Jon Wainwright, Skeptic magazine

"The Darwin Economy is an excellent, necessary and compelling remonstrance against a mode of thinking in America that is creating political denial, stagnation, collision and potential decline. We need Frank's book but we also need to acknowledge America's deep cultural and ideological inability to fully appreciate it."—Joseph C. Bertolini, European Legacy

"I've been reading Robert Frank's books for years, and he just gets better and better. I strongly recommend The Darwin Economy: it's clear, persuasive, and cleverly entertaining, and it provides a new and original insight about a central issue in economics. Read and enjoy."—Thomas C. Schelling, Nobel Laureate in Economics

"The Darwin Economy debunks popular nostrums of both left and right, and takes particular aim at the notion that a well-functioning competitive market system will necessarily produce socially optimal results. Frank suggests novel approaches to America's problems that go well beyond the tired ideas of the present debate."—Francis Fukuyama, author of The Origins of Political Order

"Competition often serves the parts better than the whole. This is true for both species evolution and human society. Only a fool would count on the invisible hand. In his usual clearheaded and lively style, Robert Frank explains how Charles Darwin thought more deeply about these issues than most contemporary economists."—Frans de Waal, author of The Age of Empathy and Our Inner Ape

"Pointing to new ways of thinking about collective action and taxation, Robert Frank has given us a book that is as important as it is timely."—Dan Ariely, author of Predictably Irrational

"The Darwin Economy's message is in my view the only hope for a rational economic future."—William J. Baumol, past president, American Economic Association

"This lucid, deeply engaging book provides the perfect antidote to the mindless sloganeering that dominates our current discussions about the role of government in a free society."—Dani Rodrik, author of The Globalization Paradox

"Robert Frank convincingly predicts that Darwin will eventually be recognized as the true intellectual father of economics. After you read The Darwin Economy, you'll want this prediction to come true as soon as possible."—David Sloan Wilson, author of Evolution for Everyone: How Darwin's Theory Can Change the Way We Think About Our Lives

"Pondering the implications of Darwinian theory, and rejecting the received wisdom of libertarian and left-wing pundits alike, Robert Frank convincingly lays out economic policies that will benefit the rich, the poor, and the broader society."—Howard Gardner, author of Truth, Beauty, and Goodness Reframed

"Human beings cooperate. Markets help. That's Adam Smith. Human beings also compete: not just for resources, but for relative position in the mating game. That's Darwin. Add Darwin to Adam Smith, and you get Robert Frank, and a book full of dazzling insight."—Mark Kleiman, author of When Brute Force Fails

"Robert Frank is a national treasure in our discussions about public policy. He shows here that our understanding of economics needs to be informed more by a sophisticated interpretation of Charles Darwin than by a simplistic view of Adam Smith. Given the state of our politics, this latest dose of Frank advice deserves to be widely read."—Robert D. Putnam, author of Bowling Alone and American Grace