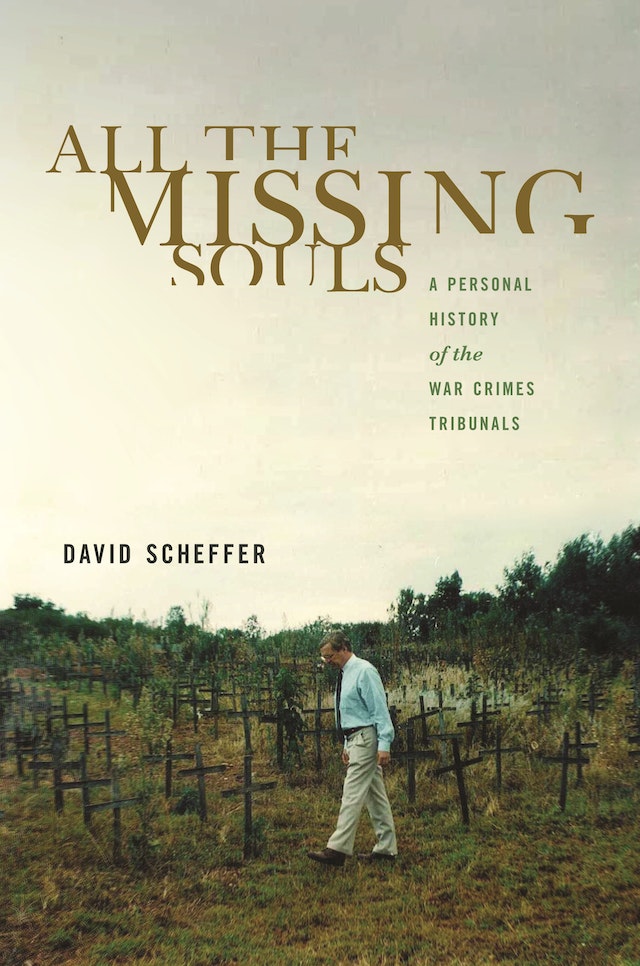 Within days of Madeleine Albright’s confirmation as U.S. ambassador to the United Nations in 1993, she instructed David Scheffer to spearhead the historic mission to create a war crimes tribunal for the former Yugoslavia. As senior adviser to Albright and then as President Clinton’s ambassador-at-large for war crimes issues, Scheffer was at the forefront of the efforts that led to criminal tribunals for the Balkans, Rwanda, Sierra Leone, and Cambodia, and that resulted in the creation of the permanent International Criminal Court. All the Missing Souls is Scheffer’s gripping insider’s account of the international gamble to prosecute those responsible for genocide, war crimes, and crimes against humanity, and to redress some of the bloodiest human rights atrocities in our time.

Scheffer reveals the truth behind Washington’s failures during the 1994 Rwandan genocide and the 1995 Srebrenica massacre, the anemic hunt for notorious war criminals, how American exceptionalism undercut his diplomacy, and the perilous quests for accountability in Kosovo and Cambodia. He takes readers from the killing fields of Sierra Leone to the political back rooms of the U.N. Security Council, providing candid portraits of major figures such as Madeleine Albright, Anthony Lake, Richard Goldstone, Louise Arbour, Samuel “Sandy” Berger, Richard Holbrooke, and Wesley Clark, among others.

A stirring personal account of an important historical chapter, All the Missing Souls provides new insights into the continuing struggle for international justice.

David Scheffer is the Mayer Brown/Robert A. Helman Professor of Law and director of the Center for International Human Rights at Northwestern University School of Law. He led American initiatives on war crimes tribunals during the 1990s, served as the first U.S. ambassador-at-large for war crimes issues (1997-2001), and was named one of Foreign Policy's "Top Global Thinkers of 2011."

"David Scheffer tells the inside story of the creation of international justice for victims of atrocity crimes. As the picture of astronauts walking on the moon embodied the evolution of technology, this book captures eight years of a controversial process that is changing humanity forever."—Luis Moreno-Ocampo, chief prosecutor of the International Criminal Court

"Scheffer's personal experiences combined with his legal knowledge and moral appreciation of what it means to build a genuine system of international criminal justice make this an important book. His tale makes clear just how new and fragile this system is, and how contingent it is on the personal determination and political will of a handful of key players."—Anne-Marie Slaughter, Princeton University

"Scheffer is not some sheltered academic writing idealistically about a world he does not know or understand. He has seen what can happen when there is no rule of law. This book is a treasure and an amazing achievement."—Gregory B. Craig, former White House counsel to President Barack Obama

"David Scheffer was a central mover in the 1990's international assault on the world's architects of atrocity. The main weapons in this campaign were the international tribunals for former Yugoslavia, Rwanda, Sierra Leone, and Cambodia, and the newly established International Criminal Court. Scheffer's important and original book is a detailed and surprisingly personal account of a historic movement and the vital story of a revolutionary international investment in the struggle for a future of peace with justice."—Sir Brian Urquhart, former under-secretary-general of the United Nations

"Few persons have been so intimately involved as David Scheffer in the contemporary emergence of international criminal justice. His insightful book shows not only his important role in bringing about the tribunals and the International Criminal Court, but also reveals the inner workings of the international legislative processes."—M. Cherif Bassiouni, DePaul University

"David Scheffer has written a fascinating book that will be read with great interest by everyone in the growing field of international criminal law, as well as many others who are concerned about international law and institutions. All the Missing Souls is rich in detail and very compelling. There is nothing comparable to this in terms of its breadth and authority."—William A. Schabas, author of Genocide in International Law

"All the Missing Souls is a masterful, well-paced read that fills a glaring gap in the literature on international justice. Scheffer is to be applauded for having written a passionate yet restrained personal account that is lucid, self-critical, and smart, and of singular importance. I have no doubt that All the Missing Souls will come to rank alongside Telford Taylor's The Anatomy of the Nuremberg Trials. Scheffer is the Taylor of our times."—Jens Meierhenrich, London School of Economics and Political Science