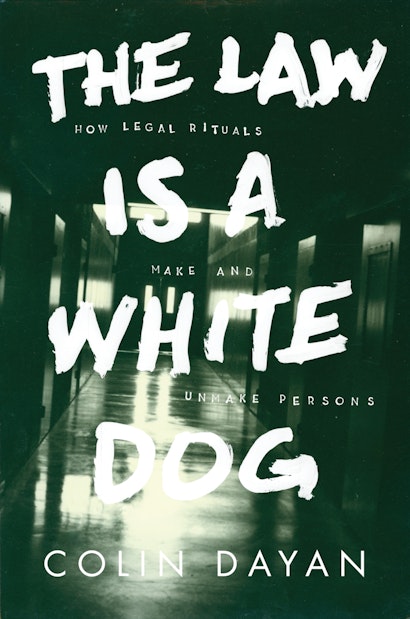 Abused dogs, prisoners tortured in Guantánamo and supermax facilities, or slaves killed by the state—all are deprived of personhood through legal acts. Such deprivations have recurred throughout history, and the law sustains these terrors and banishments even as it upholds the civil order. Examining such troubling cases, The Law Is a White Dog tackles key societal questions: How does the law construct our identities? How do its rules and sanctions make or unmake persons? And how do the supposedly rational claims of the law define marginal entities, both natural and supernatural, including ghosts, dogs, slaves, terrorist suspects, and felons? Reading the language, allusions, and symbols of legal discourse, and bridging distinctions between the human and nonhuman, Colin Dayan looks at how the law disfigures individuals and animals, and how slavery, punishment, and torture create unforeseen effects in our daily lives.

Moving seamlessly across genres and disciplines, Dayan considers legal practices and spiritual beliefs from medieval England, the North American colonies, and the Caribbean that have survived in our legal discourse, and she explores the civil deaths of felons and slaves through lawful repression. Tracing the legacy of slavery in the United States in the structures of the contemporary American prison system and in the administrative detention of ghostly supermax facilities, she also demonstrates how contemporary jurisprudence regarding cruel and unusual punishment prepared the way for abuses in Abu Ghraib and Guantánamo.

Colin Dayan is the Robert Penn Warren Professor in the Humanities at Vanderbilt University. Her books include Haiti, History, and the Gods and The Story of Cruel and Unusual. 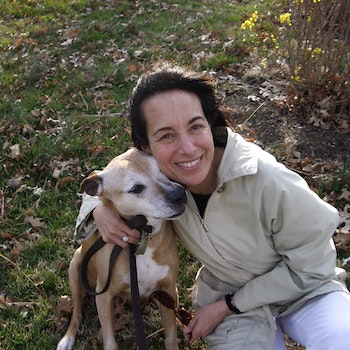 "The Law is a White Dog is both philosophically breathtaking and politically relevant. Dayan's disrobing of personhood is not simply an exposure of injustice, but an argument. She beckons us to a conception of the law that considers emotion and ethics as relevant as reason."—Imani Perry, American Literary History

"[A] breath-taking tour through legal and cultural contexts richly and passionately portrayed. . . . Dayan aspires to do more than debunk the 'rationality' of law; she cries out against the injustice and violence that law's word-twisting makes both possible and invisible. Her descriptions and account of civil death, force-feeding, mind-killing solitary confinement, and slavery and its inheritors, should be required reading."—Linda Ross Meyer, Law, Culture and Humanities

"Dayan succeeds mightily in her dismal project. The tale is told via death-row chain gangs, cell-extraction with dogs, rape by 'correctional officers', a rare first-hand report on the horrors of supermax prisons, and much else besides: the entombment of the living that made an end to the death penalty possible—but only because a fate worse than death had been found. . . . The book is defined by three extraordinary strengths. First, its moral force is as direct as that of Charles Dickens, émile Zola or Henry Mayhew. Its controlled anger reminded me of No Logo, Naomi Klein's great critique of international capitalism. Second, I have never read a better use made of case law: Dayan knows the importance of legal decisions but is not bound by them, and is always aware that their hinterland matters much more than their formal prose. . . . Third and best, the book takes the margins and makes them central. . .these features help to make it a triumph of style as well as of substance."—Conor Gearty, Times Higher Education

"Interdisciplinary scholar Colin Dayan's most recent book, The Law Is a White Dog: How Legal Rituals Make and Unmake Persons, presents a postmodern blend of anthropology, social critique, and legal history that deconstructs the Enlightenment rationality generally associated with law. Dayan examines some of the ways in which the mechanisms of our legal system perpetuate 'violence and oppression' (p. xvii) alongside progress and modernity. Going beyond traditional histories and examinations of the law, her book explores how larger socio-legal processes, like marginalization, the creation of social outcasts, and the justification of brutal penal practices, shape our present-day society. Dayan, who serves simultaneously as anthropologist, social critic, and poet, depicts the darker side of American society and the often repressive character of our law. . . . Written by an author well known for previous interdisciplinary work in cultural studies and law, this book is a must-have for both general academic libraries and academic law libraries. The writing is crisp, and the way in which Dayan assembles a wide array of topics that are rarely grouped together is thought-provoking and engaging. The book addresses important social questions and reveals the subtle ways that idiosyncratic legal reasoning works to rationalize harsh social processes. Dayan's deconstruction highlights the law as a key mechanism for social control, rather than a narrow area of professional discourse or an administrative or procedural system that touches only a small segment of society. Ultimately, The Law Is a White Dog will prove valuable for anyone who seeks a comprehensive, critical understanding of our society and the role played in it by the law."—Law Library Journal

"[T]his work by Dayan is one of the most valuable contemporary books on law and society to come out in quite some time. . . . The Law is a White Dog is an innovative, highly intellectual book."—Choice

"A cumulative masterpiece of probing, relevant erudition. . . . More concerned with conceptual structures than local specifics, Dayan breaks rich new critical ground on the well-trodden path from plantation to prison. [A] stunningly insightful yet painstaking inquiry into the very real effects of the ongoing legal and cultural project of defining the boundaries of personhood."—American Literature

"Colin Dayan has written a challenging and ambitious book. . . . Its interest for social and political philosophers and philosophers of law will be primarily its engagement with the question of how personhood is defined and materially shaped via the practice of law. . . . The Law is a White Dog offers much, perhaps at exactly the points it frustrates expectation. It would be appropriately read in upper-level undergraduate classes, particularly in philosophy of law, social and political philosophy, and animal studies."—Alexis Shotwell, Philosophy in Review

"Colin Dayan's The Law is a White Dog is the most imaginative and passionate (mainly about prison conditions in the US) that I have come across for a long while."—Conor Gearty, LSE Review of Books

"Law is the major character in this philosophical narrative. Analyzing how the law sometimes alters and disfigures human persons . . . reducing people to bare human materials, biologically alive but legally dead. Dayan summons a remarkable range of philosophical tales, including Voodoo, Greek tragedy, medieval law, Human Rights Watch reports, magic, and medicine. But eclectic as this selection is, these discourses tell a rigorous story about how humans are turned into non-humans, how animals become humans, how things are endowed with intention."—Branka Arsic, Leviathan

"The Law is a White Dog is a vivid exploration of literature, history, and law. It asks hard yet stimulating questions about the systemically entrenched racial, colonial, and ideological inequalities of the Anglo-American legal system. As a text concerned with the role of law in the (un)making of legal identity, this book makes a very valuable contribution to the field of socio-legal studies as it forces one to think about the violence of law and to trouble the assumptions made about the rule of law in modern liberal democratic societies. . . . As a present-day political project, this effort identifies the everyday consequences of remaining silent to systemic injustices."—Socialist Studies/Etudes socialistes

"This provocative and rigorous analysis makes a significant contribution both to legal scholarship and contemporary discussions about criminalization, national security and racism. . . . An innovative engagement with a range of legal areas and eras, Dayan's work helps us trace the role legal reasoning has played in producing a slave society, and a prison society, in which structures of racial violence appear inevitable, justifiable, rational and natural."—Journal of Legal Studies

"Colin Dayan's The Law is a White Dog is a tour de force of interdisciplinary legal scholarship. . . . Employing an approach that emphasizes the power of legal rhetoric, the persistence of modes of categorizing entities on the margins, and the magical thinking that conjures and parries otherness when it comes into contact with law, Dayan gives us a history replete with stunningly fresh insights into the transformational violence law inflicts and legitimizes on those it regulates and controls."—Law and Society Review

"Dayan's work is engrossing, imaginative, and erudite. It will appeal to wide audiences, including historians, anthropologists, and sociologists of slavery, scholars interested in the history of punishment, and academics and activists concerned with both human and animal rights."—Mindie Lazarus-Black, New West Indian Guide

"Colin Dayan's engagement with what she calls the sorcery of the law leads her to trouble narrative movements from ignorance to knowledge, animality to humanity, barbarism to enlightenment, slavery to freedom. In the process she urges us to recognize how legal technologies that once sustained a core contradiction of slavery—that slaves were only accorded legal personality when they committed a crime—now relegate millions of incarcerated persons to civil death. The Law is a White Dog compels us to acknowledge how the ghosts of slavery continue to animate institutions—from Guantanamo to the supermax—that thrive on racialized violence today."—Angela Y. Davis, professor emerita, University of California, Santa Cruz

"In language that is searing and lyrical, evocative and precise, this exceptional book thinks with the zombies, specters, felons, slaves, dogs, cadavers, and other entities that are the remnants of loss and dispossession in the law. Dogs and people are abundantly present here, even as the legal fictions they are made to inhabit are exposed with acid lucidity. These are hard histories made readable by Dayan's precious acts of writing."—Donna J. Haraway, author of When Species Meet

"This is truly an extraordinary book, one which will become a classic of interdisciplinary legal scholarship. Combining memoir, literary criticism, history, cultural studies, and analysis of legal doctrine, this is a fascinating tour de force."—Austin Sarat, Amherst College