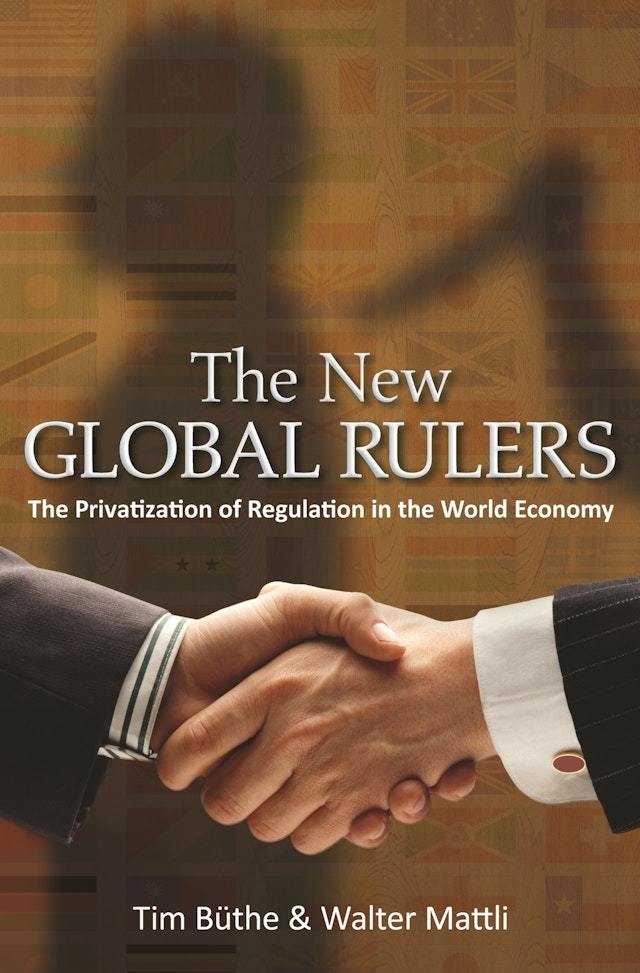 Over the past two decades, governments have delegated extensive regulatory authority to international private-sector organizations. This internationalization and privatization of rule making has been motivated not only by the economic benefits of common rules for global markets, but also by the realization that government regulators often lack the expertise and resources to deal with increasingly complex and urgent regulatory tasks. The New Global Rulers examines who writes the rules in international private organizations, as well as who wins, who loses — and why.


Tim Büthe and Walter Mattli examine three powerful global private regulators: the International Accounting Standards Board, which develops financial reporting rules used by corporations in more than a hundred countries; and the International Organization for Standardization and the International Electrotechnical Commission, which account for 85 percent of all international product standards. Büthe and Mattli offer both a new framework for understanding global private regulation and detailed empirical analyses of such regulation based on multi-country, multi-industry business surveys. They find that global rule making by technical experts is highly political, and that even though rule making has shifted to the international level, domestic institutions remain crucial. Influence in this form of global private governance is not a function of the economic power of states, but of the ability of domestic standard-setters to provide timely information and speak with a single voice. Büthe and Mattli show how domestic institutions’ abilities differ, particularly between the two main standardization players, the United States and Europe.

Tim Büthe is associate professor of political science and a senior fellow of the Rethinking Regulation Center at Duke University. Walter Mattli is professor of international political economy and a fellow of St. John's College, University of Oxford. His books include The Politics of Global Regulation (Princeton).

"[The New Global Rulers] is an example of first-rate research that offers thick descriptions, compelling theory, and convincing empirical results. The authors have done a masterful job in expanding our knowledge and understanding of globalization, and the book deserves to be widely read."—John Doces, Comparative Political Studies

"Their comprehensive survey provides compelling evidence of their theory and invaluably enhances our understanding of international standard setting. . . . The authors can . . . take credit for having developed a convincing theory on the main drivers of power within this specific and widespread phenomenon of global ruling. The book is, without a doubt, highly recommended. While it is primarily intended for scholars, it provides very interesting insights for anyone interested in how global standard setting works, in its historical, political, and socio economic background, and in its significance for global governance in general."—Matthias Schmidt, Accounting Review

"This interesting book about an overlooked subject has a misleading title. The global rulers in question are relatively anonymous nongovernmental groups that set international standards. Business exerts its power, both directly and through government, in selecting and influencing the rule makers. The rules help to determine winners and losers in the marketplace, as well as the public welfare. These rules also provide advantages to specific countries and regions. At a time when government regulation has fallen out of favor, the power of these unaccountable nongovernmental authorities deserves the closer scrutiny that this book provides."—Choice

"Opening the 'black box' of private rule-making, [Büthe and Mattli] seek to analyze 'who writes the rules in international private organizations, as well as who wins, who loses—and why.' They dispute claims that international standardization is an apolitical scientific process, bringing to the fore the often under-appreciated political nature of so-called technical activities."—Book Notes

"The authors offer both a new framework for understanding global private regulation and detailed empirical analyses of such regulation based on multi-country, multi-industry business surveys."—Superscript

"[A] serious and searching [account] of the importance of rules and of the ways rules are made for the workings of the economy and for political and social life generally."—Martin Albrow, Books and Ideas

"[The New Global Rulers] examines the wide and growing range of international, private (i.e., non-governmental) standards being set by groups like the IEC, ISO, and IASB. As Büthe and Mattli point out, such standards are a double-edged sword. . . . It seems appropriate, at this juncture . . . to give some serious and well-informed thought to the desirability of regulatory regimes that are both non-governmental and international."—Chris MacDonald, Canadian Business

"[T]his is an original piece of research on a timely subject using under-utilized but necessary methods that should prove useful to academics and regulators alike."—Anastasia Xenias, Political Science Quarterly

"By providing the first systematic and most comprehensive analysis of key private institutions in regulation, the authors do a masterful job. Hence, the book deserves to be widely read by scholars of globalisation and international regulation. Furthermore, by refraining using too much academic jargon, it makes the topic of private regulation, with its important social and economic consequences, also accessible to a broad audience."—Christian Brandli, Swiss Political Science Review

"Büthe and Mattli push the understanding of global governance in an important new direction by considering domestic arrangements as an explanatory factor in outcomes at the global level. . . . Büthe and Mattli, in particular, illuminate a generally underdeveloped dimension, the domestic environment and its connection to international outcomes."—Jonathan G. S. Koppell, Perspectives on Politics

"In a world where global standards increasingly determine access to world markets, understanding how those standards are set is of vital concern to citizens, governments, and firms. This deeply informed book asks the questions and presents the often counterintuitive facts about the relation between domestic interests and global rule making that will set the intellectual agenda and shape political discussion in this area for years to come."—Charles Sabel, Columbia Law School

"Tim Büthe and Walter Mattli say something new and important about the world economy. Better yet, they prove their case. As economic interdependence grows and with it the need for clear global rules, more and more of those rules are being developed by private regulatory groups. Büthe and Mattli not only document this shift, they show how inherently political the process is."—Charles Lipson, University of Chicago

"Büthe and Mattli's survey of hundreds of senior financial managers is a window into a world most of us have observed only anecdotally. This impressive book convincingly reveals that the global regulatory advantage goes to those actors who can get useful information into the right hands at the right time. Bravo on a compelling story about how private firms, industry organizations, and local regulators contribute to the global governance of finance and production."—Beth Simmons, Harvard University

"When you buy an electrical appliance or rely on corporate accounts, you are affected by transnational private regulation—a technical arena that is also highly political. In The New Global Rulers, Tim Büthe and Walter Mattli brilliantly explain who wins, and who governs, in this significant but under-studied domain."—Robert O. Keohane, Princeton University

"Analytically powerful. Both the empirical material and the theoretical analysis are significant contributions, and I think they will be quite influential. The book's impact will be enhanced by its unusually clear writing and engaging discussions of history and examples. It is a very accessible volume, which should give it considerable crossover appeal beyond international-relations scholars."—Kenneth W. Abbott, Arizona State University

"The New Global Rulers covers a big topic—an important and growing one, with an ever-wider audience."—Peter A. Gourevitch, University of California, San Diego, and coauthor of Political Power and Corporate Control