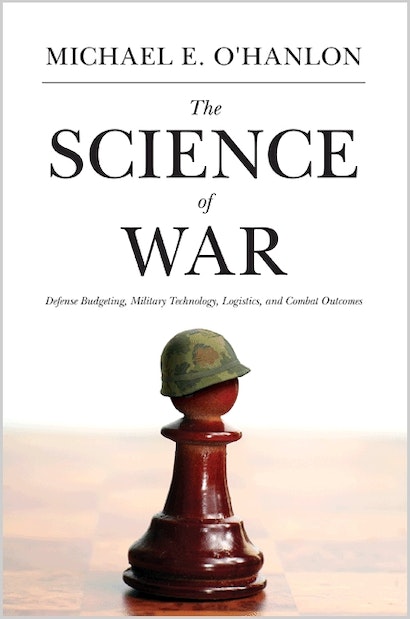 The U.S. military is one of the largest and most complex organizations in the world. How it spends its money, chooses tactics, and allocates its resources have enormous implications for national defense and the economy. The Science of War is the only comprehensive textbook on how to analyze and understand these and other essential problems in modern defense policy.

Michael O’Hanlon provides undergraduate and graduate students with an accessible yet rigorous introduction to the subject. Drawing on a broad range of sources and his own considerable expertise as a defense analyst and teacher, he describes the analytic techniques the military uses in every crucial area of military science. O’Hanlon explains how the military budget works, how the military assesses and deploys new technology, develops strategy and fights wars, handles the logistics of stationing and moving troops and equipment around the world, and models and evaluates battlefield outcomes. His modeling techniques have been tested in Iraq and Afghanistan, including the methods he used to predict higher-than-anticipated troop fatalities in Iraq—controversial predictions that have since been vindicated.

The Science of War is the definitive resource on warfare in the twenty-first century.

Michael E. O'Hanlon is a senior fellow at the Brookings Institution who specializes in national security policy. His many books include Bending History and The Wounded Giant.

"As an introduction to a vital realm of analysis, this book has much to offer. But its greater value may be as a primary text describing the type of military thinking that gets states into trouble. Indeed, a symptom of this pathology is that no rival textbooks exist, and thus The Science of War presents evidence not only of the models' shortcoming but also that of our profession."—Jonathan D. Caverley, Perspectives on Politics

"O'Hanlon allows the reader to make informed decisions on how to best make and analyze projections. The Science of War will appeal to those with an interest in the relationship between foreign policy and the military, economists, and political scientists."—Jeff Obermeyer, On Point

"Although war is as much a matter of art as of science, military planning cannot succeed without an understanding of the technical issues that can make or break operations. O'Hanlon, one of the nation's top defense analysts, has performed a service by writing a book that introduces the complexities of budgeting, logistics, combat simulation, and military technologies. The strength of this work is the way it explains the reasoning behind commonly used models and analytic devices, links assumptions to results, and emphasizes the limitations inherent to the tools of defense analysis."—Choice

"Academics and bureaucrats concerned with Australia's defence would do well to read it. Even military officers familiar with operations research will find the book a useful compendium of practical defence analysis. And for those officers without such a background, The Science of War should be compulsory reading—equally so for students who aspire to work on defence issues inside or outside of government."—Mark Thomson, Australian Army Journal

"[T]he military analytical thinking developed in The Science of War is a key starting point for any comprehensive effort to address defense and warfare matters."—Nicolo Sartori, International Spectator

"Timely, thoughtful, and full of insight. A signal contribution to the field. O'Hanlon's textbook will enable the reader to make sense of a complex, arcane, and hugely important area. It features a superb methodology certain to help make defense analysis more rigorous and more structured. A must-read for those in the defense arena."—General David H. Petraeus, U.S. Army

"This book is a miracle of exposition that makes arcane topics of military analysis both understandable and highly engaging. One of its great strengths is its commonsense modesty, showing how scientific methods in defense analysis are critical to understanding combat yet how they must be complemented by an understanding of the art, history, and politics of warfare. I have no doubt this book will become a staple in security studies."—Harold A. Feiveson, Princeton University

"Never has informed civilian participation in defense policy been more important, but rarely do college or graduate school courses provide the background necessary for civilians to play their needed role. In The Science of War, O'Hanlon crystallizes insight from his years of practicing defense analysis at the highest level and teaching it in several of the nation's finest universities to lay out the landscape of analytical issues in a uniquely comprehensive way."—Stephen Biddle, Council on Foreign Relations

"Michael O'Hanlon is one of the top defense analysts in the United States, and The Science of War is an essential guide to the planning and budgetary issues that have shaped American defense. It is clearly written, replete with insightful examples, and takes on the vexing questions that confront military strategists. The defense policy debate has often been influenced more by polemics than hardheaded analysis. The Science of War is a useful corrective and fills an enormous gap."—Michael R. Gordon, coauthor of Cobra II: The Inside Story of the Invasion and Occupation of Iraq

"Although Clausewitz remains the font of wisdom on war, defense policy for a modern superpower cannot be made responsibly without a range of knowledge about the technocratic complexities of budget tradeoffs, technological alternatives, combat simulation, and logistics. This book is the first to illustrate these issues for audiences outside the Pentagon and gives them better grounds for debating program choices and deciding 'how much is enough.'"—Richard K. Betts, Columbia University

"A very interesting and valuable read. The Science of War explores in operational detail the broad areas that comprise, among other topics, the economics of national security. People who read this book will learn a great deal about very different parts of defense analysis."—Michael J. Meese, United States Military Academy

"This is a significant contribution to the field. The Science of War is a thorough and carefully researched explication and explanation of the public-policy tools for analyzing defense issues. It comes at a time when we have some major defense-policy debates ahead of us. I am not aware of anything quite like this book in the field of defense studies."—Robert H. Dorff, United States Army War College