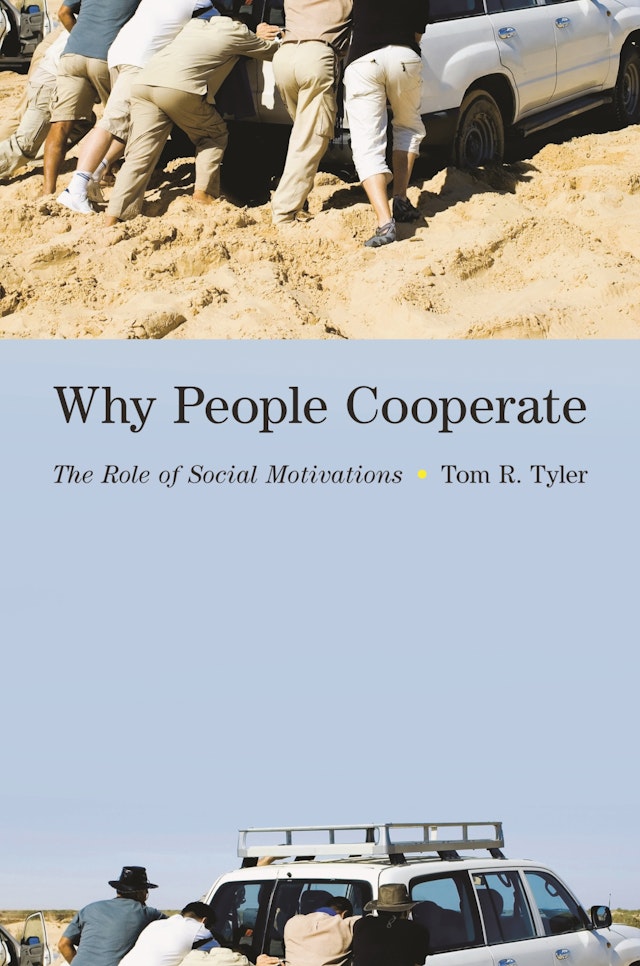 Any organization’s success depends upon the voluntary cooperation of its members. But what motivates people to cooperate? In Why People Cooperate, Tom Tyler challenges the decades-old notion that individuals within groups are primarily motivated by their self-interest. Instead, he demonstrates that human behaviors are influenced by shared attitudes, values, and identities that reflect social connections rather than material interests.


Tyler examines employee cooperation in work organizations, resident cooperation with legal authorities responsible for social order in neighborhoods, and citizen cooperation with governmental authorities in political communities. He demonstrates that the main factors for achieving cooperation are socially driven, rather than instrumentally based on incentives or sanctions. Because of this, social motivations are critical when authorities attempt to secure voluntary cooperation from group members. Tyler also explains that two related aspects of group practices — the use of fair procedures when exercising authority and the belief by group members that authorities are benevolent and sincere — are crucial to the development of the attitudes, values, and identities that underlie cooperation.


With widespread implications for the management of organizations, community regulation, and governance, Why People Cooperate illustrates the vital role that voluntary cooperation plays in the long-standing viability of groups.

"I am a fan of Tyler's approach. . . . [H]e supports his theoretical approach by clear and rigorous research rather than the polemic that all too often substitutes for thought in criminology. . . . [H]e demonstrates the paucity of the view that human action is pushed and pulled by the lures of rewards and threats of penalties. . . . [H]e focuses not on the supposed outcomes of policing (such as crime rates), but upon how policing is conducted."—P.A.J. Waddington, Policing

"One of the clear strengths of Why People Cooperate is its applicability to a variety of disciplines. Certainly, social psychologists and some political scientists with an empirical bent will want to read this book because it offers new ways to explore interactions and exchanges within groups. Industrial/organizational psychologists and researchers in management science, too, will readily see the applicability of Tyler's persuasive evidence. . . . Researchers interested in social policies. . . are also likely to find grist for their respective mills in this brief but rich book."—Dana S. Dunn, PsycCRITIQUES: Contemporary Psychology: APA Review Of Books

"[T]he book is well written, the ideas are presented clearly and the arguments are empirically grounded. Professor Tyler not only captures the reader's attention, but also manages to change his/her mind about the topic. The book is highly recommended to researchers, academics, professionals and even laypeople interested in the topic."—Francesc S. Beltran, Journal of Artificial Societies Social Simulation

"With innovative analyses throughout Why People Cooperate: The Role of Social Motivations, Tom Tyler offers the foundation for participation based in social relationships. Numerous recent studies are cited that build his assertions and provide documented results for motivating cooperation within a variety of group settings."—Paula Tripp, Journal of Family and Consumer Sciences

"Summing up, Tom Tyler's book provides a very useful framework for defining and describing various types of cooperation, provides a compelling empirical analysis of instrumental and social motivations that underlie cooperative behavior, and draws out the implications of these findings for organizational design."—Timothy R. Wojan, Journal of Regional Science

"In Why People Cooperate, Tyler demonstrates how a focus on fair procedures administered in an atmosphere of mutual trust can create groups that voluntarily function to produce effective problem solving efforts. Those concerned with productive functioning in groups, organizations, and societies will do well to attend to Tyler on the social motivations that lead to success in those settings."—John Darley, Princeton University

"Why People Cooperate provides nothing less than a new direction for the social sciences. Tyler gathers a wide array of disparate phenomena—morality, emotions, norms, attitudes, legitimacy, self-esteem, and trust—under a single theoretical umbrella. The book provides convincing evidence that these phenomena can produce cooperative workers and citizens because they affect the innate human desire to associate in positive ways with each other."—Jeffrey J. Rachlinski, Cornell Law School

"For decades, social science thinking has been dominated by the assumption that human behavior is primarily instrumental—that people's behaviors are determined by the rewards and punishments that result from their actions. Making a major and enormously important paradigmatic shift, Tyler argues instead that social motivations based in attitudes, values, identity, procedural justice, and motive-based trust are often a far more significant determinant of human behavior and a more effective and less costly tool for institutional design. This book is a must-read not only for academics looking for an alternative to the instrumental model of human behavior, but for any individual concerned with what is needed to make institutions and society work effectively."—Christopher Winship, Harvard University