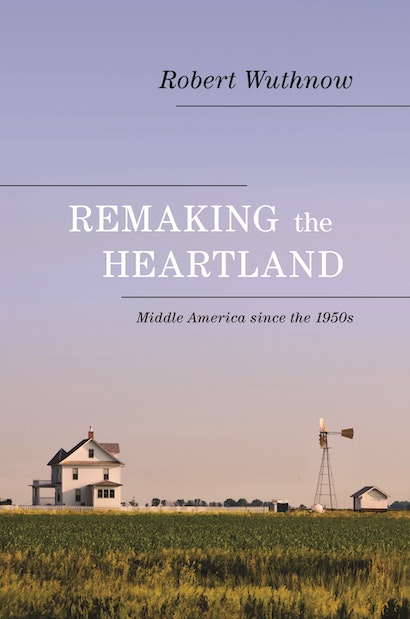 For many Americans, the Midwest is a vast unknown. In Remaking the Heartland, Robert Wuthnow sets out to rectify this. He shows how the region has undergone extraordinary social transformations over the past half-century and proven itself surprisingly resilient in the face of such hardships as the Great Depression and the movement of residents to other parts of the country. He examines the heartland’s reinvention throughout the decades and traces the social and economic factors that have helped it to survive and prosper.


Wuthnow points to the critical strength of the region’s social institutions established between 1870 and 1950 — the market towns, farmsteads, one-room schoolhouses, townships, rural cooperatives, and manufacturing centers that have adapted with the changing times. He focuses on farmers’ struggles to recover from the Great Depression well into the 1950s, the cultural redefinition and modernization of the region’s image that occurred during the 1950s and 1960s, the growth of secondary and higher education, the decline of small towns, the redeployment of agribusiness, and the rapid expansion of edge cities. Drawing his arguments from extensive interviews and evidence from the towns and counties of the Midwest, Wuthnow provides a unique perspective as both an objective observer and someone who grew up there.

Remaking the Heartland offers an accessible look at the humble yet strong foundations that have allowed the region to endure undiminished.

Robert Wuthnow is the Gerhard R. Andlinger '52 Professor of Social Sciences at Princeton University. His many books include Red State Religion and America and the Challenges of Religious Diversity (both Princeton).

"Well-respected sociologist Wuthnow interweaves interviews, diaries and memoirs, and census data into a series of case studies to describe a region that is thriving in the new economy, primarily because of culture and institutions. . . . [Remaking the Heartland] is well-written, documented, and argued."—Choice

"Anyone interested in the economic development of the Midwest and a counterintuitive approach to the region's future should read Wuthnow's account, which can, once again, spur us to take the region's history seriously."—Jon Lauck, Omaha World-Herald

"[Remaking the Heartland] is a well-written, detailed, and persuasive account of change in the region."—J. L. Anderson, American Historical Review

"Wuthnow provides a much needed and refreshing look into the assumptions that Middle America, especially small-town Middle America, is dying or at worst already lost to modern, urban society."—Michelle Meyer Lueck, Rural Sociology

"The book is as much history as social science, and the writing flows seamlessly from personal observation to archival material, and from case studies to broad generalization. The total package is impressive: insights from some two hundred in-depth interviews supplemented by information from local newspapers, company reports, and an original content analysis of changing values via the Farm Journal magazine. Wuthnow is also a skilled writer who displays just the right blend of affection and detachment while leading readers through a nuanced story."—James R. Shortridge, Material Culture

"We are fortunate to have a social scientist and historian with the stature of Robert Wuthnow undertake the sort of study that draws on oral history interviews, newspaper accounts, census data and broad cultural histories and interpretations. Wuthnow adds a new perspective on rural life and culture. . . . What saves the book from statistical overload is the way interviews with particular people demonstrate the impact of the data; especially good are the interviews in which interviewees describe the change they have seen over their lifetime, usually four or five decades."—Shannon Jung, Christian Century

"This study deserves, even requires, multiple readings to fully appreciate its contribution to our knowledge about the Midwest. Historians and other scholars of the region will find it informative and useful."—R. Douglas Hurt, Kansas History

"Readers interested in a comprehensive overview of the recent socio-economic history of America's heartland will find its wealth of data a valuable source of information."—Wibke Schniedermann, Journal of American Studies of Turkey

"In Remaking the Heartland, Robert Wuthnow demonstrates that the widely reported demise of the Midwest has been significantly exaggerated. Instead of a dying region, he finds a thriving one which has adapted to a challenging world by drawing on its own enduring institutions and behaviors."—David B. Danbom, author of Born in the Country: A History of Rural America

"Remaking the Heartland takes a refreshing look at Middle America and dispels common myths about what is happening there. It turns out that it is not one big place that ought to be turned into a buffalo commons after all. Robert Wuthnow has written a fine and well-researched book that will change the minds of many readers in positive directions."—R. F. Diffendal, Jr., University of Nebraska-Lincoln

"One of America's most prolific scholars of culture and change now turns his attention to his native Midwest. Robert Wuthnow paints a compelling portrait of the enduring vitality of this special part of America and offers a provocative narrative of how it is changing. Wuthnow's many fans—especially those with Midwestern ties—will enjoy his spirited, graceful, and well-evidenced argument that the heart of the American heartland still beats strong."—Robert D. Putnam, author of Bowling Alone and American Grace

"Drawing on published sources, government statistics, and autobiographical material, this book is a comprehensive appraisal of the social transformation of Middle America."—Glenn Fuguitt, University of Wisconsin-Madison and coauthor of Rural and Small Town America

"Remaking the Heartland is a compelling examination of the transformation of the Midwest in the postwar era. Combining an insider's empathy with the critical distance of someone who has moved away, Wuthnow debunks the myths of the heartland's decline and highlights the region's institutional riches and cultural creativity."—John Schmalzbauer, Missouri State University