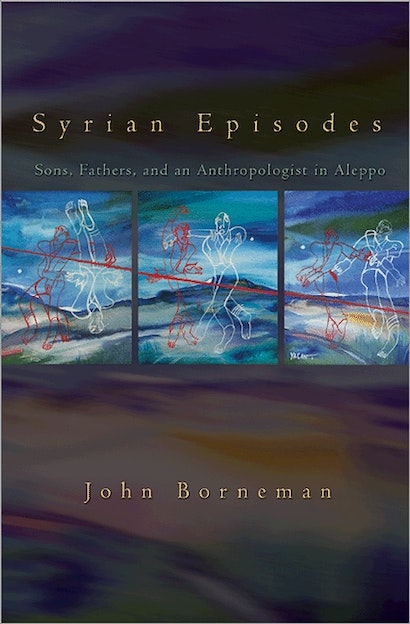 When Princeton anthropologist John Borneman arrived in Syria’s second-largest city in 2004 as a visiting Fulbright professor, he took up residence in what many consider a “rogue state” on the frontline of a “clash of civilizations” between the Orient and the West. Hoping to understand intimate interactions of religious, political, and familial authority in this secular republic, Borneman spent much time among different men, observing and becoming part of their everyday lives. Syrian Episodes is the striking result.


Recounting his experience of living and lecturing in Aleppo, Syria’s second-largest city, John Borneman offers deft, first-person stories of the longings and discontents expressed by Syrian sons and fathers, as well as a prescient analysis of the precarious power held by the regime, its relation to domestic authority, and the conditions of its demise. Combining literary imagination and anthropological insight, the book’s discrete narratives converge in an unforgettable portrait of contemporary culture in Aleppo.


We read of romantic seductions, rumors of spying, the play of light in rooms, the bargaining of tourists in bazaars, and an attack of wild dogs. With unflinching honesty and frequent humor, Borneman describes his encounters with students and teachers, customers and merchants, and women and families, many of whom are as intrigued with the anthropologist as he is with them. Refusing to patronize those he meets or to minimize his differences with them, Borneman provokes his interlocutors, teasing out unexpected confidences, comic responses, and mutual misunderstandings. He engages the curiosity and desire of encounter and the possibility of ethical conduct that is willing to expose cultural differences.

John Borneman is professor of anthropology at Princeton University. His books include Death of the Father: An Anthropology of the End in Political Authority and Settling Accounts: Violence, Justice, and Accountability in Postsocialist Europe (Princeton)

"Vivid detail fills Syrian Episodes, a book startling in its frankness about the Princeton professor's friendly, frustrating, and even flirtatious encounters in Syria's second-largest city. . . . The author fulfills his early promise of an ethnography that is as much about others' questions as his own. Both intrigue the reader as one reads conversations about subjects as varied as God, sex, movies, George W. Bush, and the Ba'ath Party. Drawing on his experiences at the souk, and the university, Mr. Borneman tells the stories of young men, some oppressed by paternal authority, some adrift without it."—Nina C. Ayoub, Chronicle of Higher Education

"Readers who are nostalgic for the orientalist tradition of encounters with the exotic other would enjoy this book, particularly given the accessible narrative style in which it is written."—Faedah M. Totah, H-NET Reviews

"Syrian Episodes, a novel and seductive mix of conversation, description, and interpretation, radiates happily from the small to the big picture. The dynamics of desire-of mutual attraction fueled by difference; of buying, selling, and collecting; of eating, living, teaching, and traveling in a new environment-structure each of the book's episodes. It doesn't avoid the anguish and risks of encountering people and persuading them to accept us. Simply put, Syrian Episodes comes at a good time to help give shape to an anthropology that posits human encounters as a rich source of knowledge that the reading of texts, no matter how sophisticated, can't provide."—Abdellah Hammoudi, author of A Season in Mecca

"John Borneman's Syrian Episodes is an exquisite and compulsively readable account of a picaresque sojourn in Aleppo, Syria. The book raises the nervous matter of experience in anthropology, troubles the bad faith of much ethnographic intention, and develops an approach that refuses to patronize. This is one of the more exciting—and ethically and intellectually demanding—works of anthropology that I have read in years, and also among the most beautiful. There is no other book like it."—Lawrence Cohen, University of California, Berkeley