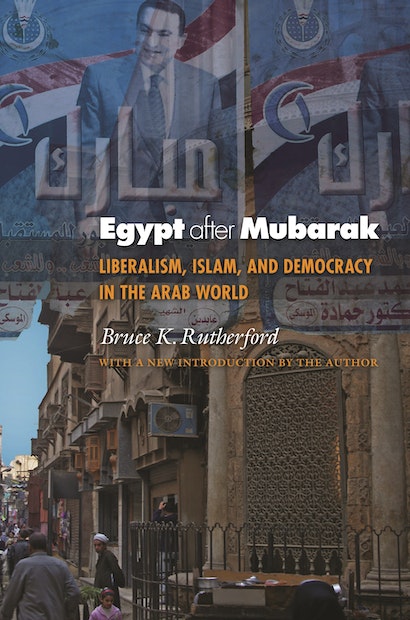 Which way will Egypt go now that Husni Mubarak’s authoritarian regime has been swept from power? Will it become an Islamic theocracy similar to Iran? Will it embrace Western-style liberalism and democracy? Egypt after Mubarak reveals that Egypt’s secularists and Islamists may yet navigate a middle path that results in a uniquely Islamic form of liberalism and, perhaps, democracy. Bruce Rutherford draws on in-depth interviews with Egyptian judges, lawyers, Islamic activists, politicians, and businesspeople. He utilizes major court rulings, political documents of the Muslim Brotherhood, and the writings of Egypt’s leading contemporary Islamic thinkers. Rutherford demonstrates that, in post-Mubarak Egypt, progress toward liberalism and democracy is likely to be slow.


Essential reading on a subject of global importance, this edition includes a new introduction by Rutherford that takes stock of the Arab Spring and the Muslim Brotherhood’s victories in the 2011-2012 elections.

"A fascinating and timely book. . . . [Rutherford] details the long and persistent struggle of the judiciary to carve out an independent role for itself, even under a military dictatorship."—Fareed Zakaria, Time

"[Readers will] be rewarded by Rutherford's ambitious effort to explain how significant political actors, specifically, the Muslim Brotherhood, the judiciary, and the business sector, can work in parallel, if not exactly together, to influence the country's trajectory over time. This is a novel approach to analyzing Egyptian politics."—Steven A. Cook, Foreign Affairs

"[Egypt after Mubarak] clearly offers both an insightful account of Egyptian politics and a potentially fruitful framework for future comparative research on political change in the Arab world."—Waleed Hazbun, Perspectives on Politics

"The author has studied closely the Brotherhood's campaign documents, and the book is based on primary sources. No student of the region can afford to ignore it."—A. G. Noorani, Frontline

"An important work, filled with valuable information and insight. Beyond the rich detail about Egypt, Rutherford's study deepens our understanding of how the characteristics of both an authoritarian and a democratic political order come together and persist in the hybrid regimes of the Arab world."—Mark Tessler, University of Michigan

"Bruce Rutherford helps us make sense of the voices emerging in Egyptian politics and understand how they resonate. Neither denying Egyptian authoritarianism nor accepting its inevitability, Rutherford draws deeply on theoretical debates among scholars to elucidate politics in this vital—and surprisingly complicated—country."—Nathan J. Brown, author of The Rule of Law in the Arab World

"Egypt after Mubarak offers a unique look at Egypt's most promising and most hopeful future. Rutherford argues that the major oppositional forces are converging on a platform of reform that will produce in Egypt a hybrid regime with liberal but circumscribed democratic characteristics. This book will have a serious and productive impact on the field."—Raymond W. Baker, Trinity College

"This book provides a superb analysis of the domestic constituencies and agendas for political reform in Egypt, highlighting their distinctive features and their common ground. Rutherford accomplishes this with a high degree of analytic sophistication, and backs it with rich supporting evidence. This book makes a significant contribution to our understanding of contemporary Egyptian politics and society by deftly identifying—and capturing the nuances of—the alternate political visions in Egypt."—Carrie Rosefsky Wickham, Emory University