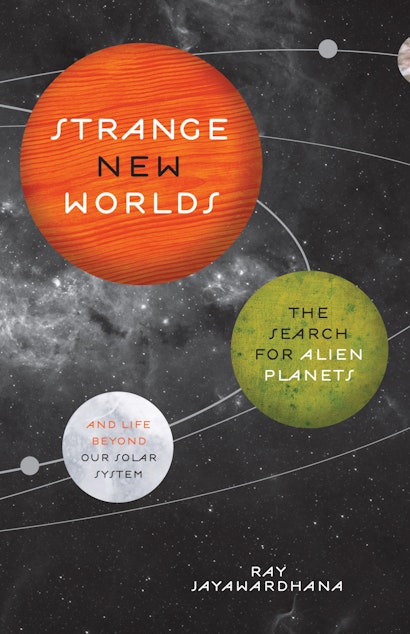 In Strange New Worlds, renowned astronomer Ray Jayawardhana brings news from the front lines of the epic quest to find planets—and alien life—beyond our solar system. Only in the past two decades, after millennia of speculation, have astronomers begun to discover planets around other stars—thousands in fact. Now they are closer than ever to unraveling distant twins of the Earth. In this book, Jayawardhana vividly recounts the stories of the scientists and the remarkable breakthroughs that have ushered in this extraordinary age of exploration. He describes the latest findings — including his own—that are challenging our view of the cosmos and casting new light on the origins and evolution of planets and planetary systems. He reveals how technology is rapidly advancing to support direct observations of Jupiter-like gas giants and super-Earths—rocky planets with several times the mass of our own planet—and how astronomers use biomarkers to seek possible life on other worlds.

Strange New Worlds provides an insider’s look at the cutting-edge science of today’s planet hunters, our prospects for discovering alien life, and the debates and controversies at the forefront of extrasolar-planet research.

In a new afterword, Jayawardhana explains some of the most recent developments as we search for the first clues of life on other planets.

Ray Jayawardhana is professor and Canada Research Chair in Observational Astrophysics at the University of Toronto, as well as an award-winning science writer.

"Anyone scanning the shelves today to learn about such urgent news from the universe should go directly to 'J' and take down Ray Jayawardhana's Strange New Worlds. It begins with early speculation by ancient thinkers but moves quickly to a series of seemingly promising discoveries, beginning 160 years ago, that raised researchers' hopes only to frustrate them. . . . [R]eading Strange New Worlds, I felt the thrill of briefly sharing in the efforts of these planet-seeking scientists and seeing the universe through their eyes."—Mike Brown, Wall Street Journal

"He takes the reader on a four-century-long scientific quest to discover our place in the universe, beginning with the Copernican hypothesis and Galileo's discovery of four of Jupiter's planets. . . . An exciting, highly readable glimpse into a discovery that could have broad scientific and cultural implications."—PublishersWeekly.com

"In Strange New Worlds, astronomer and one-time journalist Ray Jayawardhana surveys how 15 years of exoplanet discovery has changed astrophysics. . . . Jayawardhana's presentation of the research is remarkably even-handed. This is a fast-moving field in which groups have often clashed. Nonetheless, he provides a survey of the subject without giving the protagonists anything to complain about. His lucid and effortless prose makes for an engaging read."—Chris Tinney, Nature

"With the seemingly endless stream of news about discoveries of alien planets, it's easy to forget that just 20 years ago exoplanets were no more than theoretical possibilities. Now astronomer Ray Jayawardhana tells the story of how the dramatic hunt has unfolded, from the early days of stellar astronomy to present-day speculation about life outside our solar system."—New Scientist

"Professor Jayawardhana is an award-winning science writer and an eminent planet-hunter, and so is the perfect person to write an accessible guidebook to the new worlds we're discovering in our galaxy. He explains how many of those discovered so far are pretty exotic, bloated and massive or scorchingly close to their sun, and how we've even had our first weather report for another world. But what's most exciting is that this book explains how we now have within our grasp the ability to spot a true twin of Earth."—BBC Focus

"[A]n engaging read that casts a floodlight at the search for life-sustaining planets beyond our Solar System. . . . It is a must read for anyone who has ever wondered about the possibility of life beyond our planet."—Myles Gough, Cosmos

"Ray Jayawardhana, an astrophysicist and writer, vividly recounts the advances behind an extraordinary age of exploration."—Leigh Dayton, Australian

"It is the most tantalizing question: are there other planets where creatures passingly like ourselves eat Chiko Rolls, watch TV and walk the dog? Jayawardhana, a journalist-cum-Professor of Observational Astrophysics at the University of Toronto, contemplates this question and, for those of us non-scientists, explains the history and current science in simple English."—Sydney Morning Herald

"Everything you need to know about alien planet discovery is insightfully described in this engaging book, which will appeal to astronomers, general science buffs, and armchair UFOlogists."—Library Journal

"It's a fascinating story, which Ray Jayawardhana, a planet hunter, Canadian professor of astronomy and science writer, tells with panache, enthusiasm and insight. . . . Strange New Worlds is . . . rich in anecdote."—Fortean Times

"The search for habitable planets around other stars is one of the preeminent research areas in astronomy today. Jayawardhana gives a firsthand account of the exciting discoveries that have taken place in the past two decades of rapidly accelerating growth in this new field. Strange New Worlds not only conveys the author's point of view about his own discoveries of planet-forming disks around other stars, but also contains excerpts from Jayawardhana's interviews with many of the other researchers who helped build the newest astronomical instruments, observe the first extrasolar planets, and create new or revised theories for the formation of planets."—Choice

"[I]t is an interesting and well written book that doesn't need much technical knowledge to be appreciated."—David Simpson, Magonia Review of Books

"If you're looking for something to truly fire the imagination, then grab Ray Jayawardhana's Strange New Worlds from the shelves of your nearest bookshop—you will be glad that you did! . . . Providing an insider's view that includes the debates and controversies at the very front line of exoplanet research, this book is a fascinating read. Adding the occasional splash of personal interlude, Jayawardhana has provided us with the most engaging nine chapters of cutting-edge research making this masterpiece a winner for a wide audience of readers."—Astronomy Now

"One aspect that attracted me to this book was that it revealed, in story book fashion, the chronology of discoveries (including the names of the most significant players involved) in the quest for finding exoplanets. Such a format made for easy reading and, with each chapter, you could see the exoplanet story unfold."—Edward Albin, Planetarian

"Planetary scientist Ray Jayawardhana has written a very readable and exciting overview of the search for life elsewhere in the universe. . . . I recommend this book for its interesting and extensive coverage of a fascinating field."—Naomi Pasachoff, Physics in Perspective

"Jayawardhana's small book is a gem. It brings readers up to date on the rapidly progressing quest for exoplanets and their potential inhabitants, and also interweaves the very human details about the people behind these discoveries. Read this book if you want a picture of how modern astronomy and astrobiology are helping to calibrate our place in the universe. A most delightful read."—Jill Tarter, director of the Center for SETI Research

"Jayawardhana brings the latest cutting-edge science to all those astounding science-fictional visions of alien worlds, showing us that the universe is every bit as exciting as the masters of science fiction have always claimed. It's no accident that his title invokes the opening of the original Star Trek. In this terrific book, he boldly goes out into the galaxy, showing us strange—and wondrous—new worlds."—Robert J. Sawyer, Hugo Award-winning author of Wake, Watch, and Wonder

"If you have ever wanted to know how astronomers are going to find an Earth-like planet, this engaging book explains it all. Not only is Strange New Worlds fantastic storytelling about the checkered and dramatic history of exoplanet discovery, but it also gives a compelling description of the path to future discoveries."—Sara Seager, author of Exoplanet Atmospheres

"Strange New Worlds is a very satisfying book that does a thorough and excellent job of tracing the discovery and characterization of extrasolar planets. It is the only popular-level book that gives full, up-to-date, and in-depth coverage of one of the most exciting and fast-moving fields of scientific research."—Greg Laughlin, coauthor of The Five Ages of the Universe: Inside the Physics of Eternity

"This is quite a good book. Its greatest strengths are the clarity of the writing; the thorough, technically accurate, and very up-to-date coverage of the material; and of course the fascinating topics the author presents."—Edwin L. Turner, Princeton University