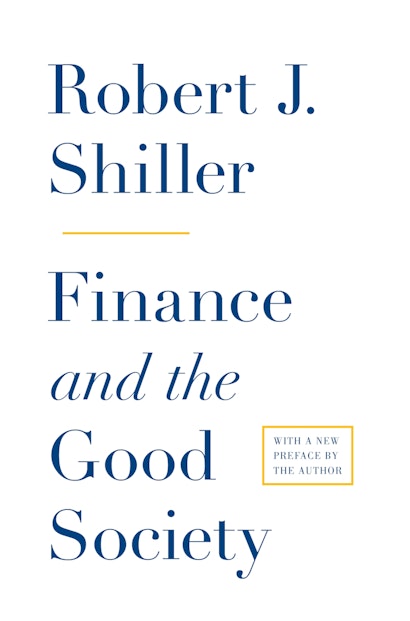 The reputation of the financial industry could hardly be worse than it is today in the painful aftermath of the 2008 financial crisis. New York Times best-selling economist Robert Shiller is no apologist for the sins of finance—he is probably the only person to have predicted both the stock market bubble of 2000 and the real estate bubble that led up to the subprime mortgage meltdown. But in this important and timely book, Shiller argues that, rather than condemning finance, we need to reclaim it for the common good. He makes a powerful case for recognizing that finance, far from being a parasite on society, is one of the most powerful tools we have for solving our common problems and increasing the general well-being. We need more financial innovation—not less—and finance should play a larger role in helping society achieve its goals.

Challenging the public and its leaders to rethink finance and its role in society, Shiller argues that finance should be defined not merely as the manipulation of money or the management of risk but as the stewardship of society’s assets. He explains how people in financial careers—from CEO, investment manager, and banker to insurer, lawyer, and regulator—can and do manage, protect, and increase these assets. He describes how finance has historically contributed to the good of society through inventions such as insurance, mortgages, savings accounts, and pensions, and argues that we need to envision new ways to rechannel financial creativity to benefit society as a whole.

Ultimately, Shiller shows how society can once again harness the power of finance for the greater good.

Robert J. Shiller is the author of Irrational Exuberance and The Subprime Solution, and the coauthor, with George A. Akerlof, of Animal Spirits: How Human Psychology Drives the Economy, and Why It Matters for Global Capitalism (all Princeton). He is the Arthur M. Okun Professor of Economics at Yale University.

"Reading his book is like wandering through an interesting garden. . . . [T]he best passages in this book make a persuasive case for a fresh view of an industry that is too glibly demonized. The most promising way to promote the good society, Shiller says, is not to restrain finance but to release it."—Sebastian Mallaby, New York Times Book Review

"[R]igorous. . . . Shiller presents a helpful taxonomy, and is convincing in his defence of insurers, financial advisers, and (some) bankers. He is good at relating even some of the more obscure and complex trading strategies to real world problems."—Howard Davies, Times Literary Supplement

"Shiller, professor of economics at Yale and author of the best-selling Irrational Exuberance, examines the future of finance in this timely new book. Recognizing the anger of many Americans—as evidenced in part by the rise of the Occupy movement—Shiller suggests that the way to fix our increasingly unequal society is through the 'democratization' and 'humanization' of finance."—PublishersWeekly.com Online Review

"Finance is in need of a little redemption. In his priestly new book, Finance and the Good Society, Mr. Shiller . . . sets out to provide it. He argues convincingly that finance can, should and usually does make the world a better place. . . . As an advocate for the financial system . . . he is wonderfully persuasive because he never plays down the problems. . . . Mr. Shiller reminds us of the profound importance of finance to making our society work."—Robin Harding, Financial Times

"[S]hiller comes across as pragmatic as well as visionary, explaining how much financial capitalism has done for society and how much more it could do if harnessed for the common good."—James Pressley, Bloomberg News

"[W]hile many have damned the finance industry for rampant self-interest and a tendency to prey on people's flawed thinking for its own benefit, Shiller wants to overhaul it to make sure finance serves the greater good. The key, he says, in his new book, Finance and the Good Society, is to democratize finance—giving the rest of us access to the tools and techniques that rich folks have used for decades to raise capital and protect themselves from risk."—Drew DeSilver, Seattle Times

"[F]inance and the Good Society is so contrarian as to be shocking—all the more so because its author, Robert Shiller, is no head-in-the-sand capitalist nor a highly paid Wall Street shill. . . . [A]t a time . . . when fear is curbing financial innovation and the political climate could 'prevent financial capitalism from progressing in ways that could benefit all citizens,' Mr. Shiller's sensible message demands urgent attention."—Economist

"Shiller has sought to prove what most of us were prepared to assume: finance may not be the great saviour that will create good society in the Utopian sense, but a society that truly seeks to be good will find in finance a willing partner that can help it achieve its goals. If you are looking for a social revolution, you will not find it in Finance and the Good Society but if you are planning a social revolution you should definitely read this book first."—Financial World

"If François Hollande really believes finance is an enemy of society, he should read Robert J. Shiller."—Tim King, European Voice

"What present would you give to the man who stands on the threshold of the élysée Palace—a man who has almost everything? A copy of Robert Shiller's Finance and the Good Society might be a timely present. . . . [A] stimulating book."—European Voice

"Robert Shiller makes a bold but convincing plea to reform the present financial system and use its power for the benefit of society as a whole."—Arab News

"Shiller has won a deserved reputation as being among the world's most prescient analysts of financial excesses. When he defends finance, we should pay attention."—Martin Wolf, Prospect

"Shiller argues his case skilfully and persistently, and with a wealth of quirky and interesting examples."—Lord Skidelsky, Management Today

"What is great about the book, and surprising I suppose, is that Dr. Shiller spends a great deal of time explaining why the practice of modern finance is mostly good. . . . Honestly, it's worth the price of the book just to read an outstanding explanation of why Derivatives Providers, Financial Engineers, and Mortgage Securitizers aren't inherently evil. . . . [T]his is an even-handed book that makes a distinction that has been rarely made in the post-crisis witch-hunt: Hate the sin, love the sinner. The people involved in finance are, in general, good people and the structures, in general, work well most of the time. Improvements can be made, and when the serial crises are over in a few years, hopefully we can discourse intelligently on these improvements. Dr. Shiller has made a good contribution to that discourse with this book."—Inflation Trader, SeekingAlpha

"In Finance and the Good Society, the Yale economist comes to praise finance, not to bury it. . . . After examining the often unappreciated value contributed by finance professionals, Shiller reminds us that finance has already helped build a better world through inventions like amortizing mortgages, and mutual funds."—CFO Magazine

"Shiller, author of The Subprime Solution and Irrational Exuberance and an originator of the Case-Shiller Home Price Indices, has written a timely, readable book, the product of teaching finance for 25 years. Unlike so many recent books stimulated by the financial disruptions that started in 2007, it does not vilify the current system of financial capitalism but instead attempts to inform readers. . . . Judging from the book, Shiller's students are very fortunate."—Choice

"Robert Shiller deserves much praise for trying to restore balance to public discussion of contemporary finance. His task is not easy, but he carries it off clearly, succinctly and with great hope for the possibilities of reformed finance. His focus on 'the good society' is absolutely correct: to build the better society that philosophers and social scientists have sought for ages, we badly need a financial system that works, not only for big business but for all of us."—Joel Campbell, International Affairs

"Finance and the Good Society makes clear that Shiller is at heart an egalitarian who wants the financial industry to become more humane and inclusive in order to serve the common good. Some readers may regard the book as a public relations treatise for the industry or may object to his advocacy of an economy closer to the European model, with reduced income inequality. Few would deny, however, that Shiller floats novel ideas that deserve further scrutiny and debate."—Murad J. Antia, Financial Analysts Journal

"This book will appeal to a much wider audience than . . . might suggest, however, with the easy flow, readability and wisdom that come hand-in-hand with being a bestselling author and professor of economics at Yale. Shiller demonstrated the same eloquence and clarity when he forewarned the public about the 2000 stock market and the 2008 sub-prime bubbles."—Tracey Zalk, Actuary

"For the public, the book succeeds in providing a highly credible case for viewing finance as integral to the goals of the good society. . . . For professional economists who know Shiller's work, the big ideas will be familiar, but there is fun to be had in the footnotes."—Erin Todd Bronchetti, Journal of Economic Literature

"Finance and the Good Society is a provocative call for understanding, then reinventing finance as a force that could create inclusive prosperity. Shiller acknowledges the excesses, inequalities, and unfortunate incentives to sleaziness in the current financial system but says it doesn't have to be that way. An important book for those who seek change."—Rosabeth Moss Kanter, Harvard Business School Professor and author of SuperCorp: How Vanguard Companies Create Innovation, Profit, Growth, and Social Good

"Drawing from history, economic theory, and keen observation of our economy, Robert Shiller brings a fresh perspective to a big issue—the role of finance in our society. He urges us to overcome the popular misperception that all finance is sleazy and to think broadly about how we can harness its power for the benefit of society as a whole."—Darrell Duffie, Graduate School of Business, Stanford University

"Many MBA students are fascinated by the world of finance but wary of entering it because they perceive it as declining and marred by unethical behavior. This book will show them why finance is and should be a vital part of the good society's solution, rather than its problem. No other book does this with more authority or credibility."—Shlomo Maital, professor emeritus, Technion-Israel Institute of Technology

"This is an overflowing feast of ideas and facts—from Adam Smith to neuroscience to casino design—that will convince intelligent readers who think of finance as an arcane subject that it is not just interesting but even entertaining."—Robert Wade, London School of Economics and Political Science