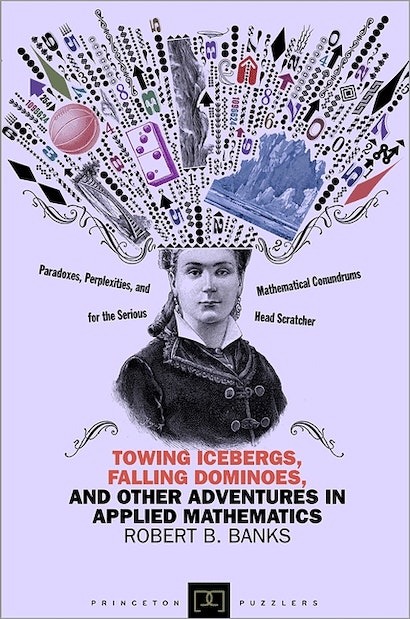 Although we seldom think of it, our lives are played out in a world of numbers. Such common activities as throwing baseballs, skipping rope, growing flowers, playing football, measuring savings accounts, and many others are inherently mathematical. So are more speculative problems that are simply fun to ponder in themselves — such as the best way to score Olympic events.


Here Robert Banks presents a wide range of musings, both practical and entertaining, that have intrigued him and others: How tall can one grow? Why do we get stuck in traffic? Which football player would have a better chance of breaking away — a small, speedy wide receiver or a huge, slow linebacker? Can California water shortages be alleviated by towing icebergs from Antarctica? What is the fastest the 100-meter dash will ever be run?


The book’s twenty-four concise chapters, each centered on a real-world phenomenon, are presented in an informal and engaging manner. Banks shows how math and simple reasoning together may produce elegant models that explain everything from the federal debt to the proper technique for ski-jumping.


This book, which requires of its readers only a basic understanding of high school or college math, is for anyone fascinated by the workings of mathematics in our everyday lives, as well as its applications to what may be imagined. All will be rewarded with a myriad of interesting problems and the know-how to solve them.

Robert B. Banks (1922-2002) was Professor of Engineering at Northwestern University and Dean of Engineering at the University of Illinois at Chicago. He served with the Ford Foundation in Mexico City and with the Asian Institute of Technology in Bangkok. He won numerous national and international honors, including being named Commander of the Order of the White Elephant by the King of Thailand and Commandeur dans l'Ordre des Palmes Academiques by the government of France. He is the author of Slicing Pizzas, Racing Turtles, and Further Adventures in Applied Mathematics (Princeton).

"There is something here for every mathematically inclined reader. The aerodynamics of balls in sport, the spread of diseases, traffic flow, the effect of meteor impacts—[Banks] deals with these and much more in engaging, well-judged detail."—Robert Matthews, New Scientist

"A fabulous exposition of adventures in applied mathematics. It's already one of my favourite books. It's so good I find it hard to lay aside."—B. L. Henry, Physicist

"This book provides an entertaining look at some simple and interesting mathematical models for a range of topics. . . . The choice of modeling subjects is imaginative. . . . Every chapter is interesting, and the self-contained nature of each section of the book means that one can happily 'dip in and out' without losing the thread of the text."—Alistair Fitt, London Mathematical Society Newsletter

"The book stands out because the examples are all treated as real-life examples with real data, and taking into account all the complications that are usually left out in academic examples: the earth is not a perfect sphere, a baseball is rough because of its stitches, it is thrown with spin, there is resistance of the air, and the resistance differs with the height, etc. Even though, there are a lot of formulas and numbers, the reading is pleasant and smooth."—A. Bultheel, European Mathematical Society