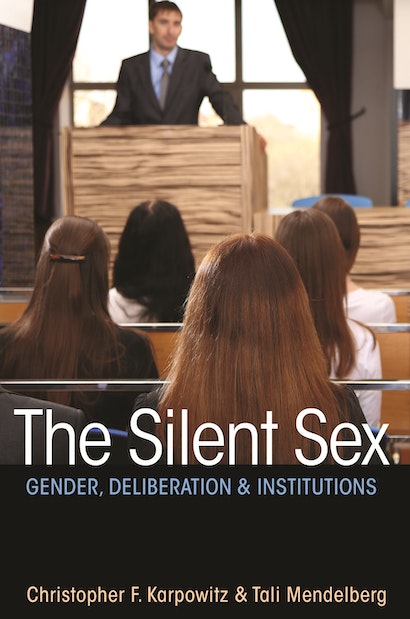 Do women participate in and influence meetings equally with men? Does gender shape how a meeting is run and whose voices are heard? The Silent Sex shows how the gender composition and rules of a deliberative body dramatically affect who speaks, how the group interacts, the kinds of issues the group takes up, whose voices prevail, and what the group ultimately decides. It argues that efforts to improve the representation of women will fall short unless they address institutional rules that impede women’s voices.

Using groundbreaking experimental research supplemented with analysis of school boards, Christopher Karpowitz and Tali Mendelberg demonstrate how the effects of rules depend on women’s numbers, so that small numbers are not fatal with a consensus process, but consensus is not always beneficial when there are large numbers of women. Men and women enter deliberative settings facing different expectations about their influence and authority. Karpowitz and Mendelberg reveal how the wrong institutional rules can exacerbate women’s deficit of authority while the right rules can close it, and, in the process, establish more cooperative norms of group behavior and more generous policies for the disadvantaged. Rules and numbers have far-reaching implications for the representation of women and their interests.

Bringing clarity and insight to one of today’s most contentious debates, The Silent Sex provides important new findings on ways to bring women’s voices into the conversation on matters of common concern.

"This book examines the extent of the contributions by men and women to public discussions about subjects of common concern. Karpowitz and Mendelberg find evidence of a significant difference in contributions—with men contributing more—and show how gender composition and rules dramatically affect what a group ultimately decides."—Choice

"This pathbreaking book brings us the latest research on why, in most public situations, women don't speak up as much as men. It's not just confidence—institutions matter, too. Sensitive and compelling, The Silent Sex is a must-read for anyone who cares about gender equality."—Jane Mansbridge, Harvard Kennedy School

"In this groundbreaking book, Karpowitz and Mendelberg show how democratic institutions fundamentally shape women's influence. They isolate institutions and conditions that exacerbate inequalities but also situations that close the gender gap. This book will undoubtedly frame generations of debate and discussion about how to craft democratic bodies to ensure equal input. This is a must-read for anyone interested in democracy, gender, and deliberation."—Jamie Druckman, Northwestern University

"The Silent Sex is a revolutionary book. Women must not only be equally represented in our society; they must be equally heard and responded to. Karpowitz and Mendelberg demonstrate that presence and voice are not the same thing, with critical consequences for our politics and society. Even more important, they show us what to do about it. This book will make a difference."—Anne-Marie Slaughter, President and CEO, New America Foundation, Bert G. Kerstetter '66 University Professor Emerita of Politics and International Affairs, Princeton University

"The Silent Sex offers a powerful and relentless analysis of the silencing of women in decision making. Karpowitz and Mendelberg show over and over—with well-crafted experiments, observational data, and deep analysis—how majority-rule institutions silence all women who find themselves in the minority regardless of expertise and experience."—Nancy Burns, University of Michigan

"The Silent Sex is the best book analyzing social power in deliberative politics to date. Karpowitz and Mendelberg provide overwhelming evidence that women are disadvantaged in the authoritative exercise of voice. But theirs is not a counsel of despair. In a series of studies that are theoretically rich, empirically rigorous, and practically vital, they go on to show how attending to group composition and institutional rules can move us a long way toward restoring equality and diversity."—Michael Neblo, Ohio State University

"Karpowitz and Mendelberg are pioneers in studying the complex interaction of gendered communication, gender composition in groups, and group decision rules. With The Silent Sex, they have made a landmark contribution to political science. There is no other book like this."—John Gastil, coauthor of The Jury and Democracy: How Jury Deliberation Promotes Civic Engagement and Political Participation

"This is the first large-scale study to test how varying group gender composition affects individual behavior and interacts with institutional rules. Unique and noteworthy, The Silent Sex provides a critical contribution to our understanding of how women participate in decision making bodies."—Christopher Larimer, University of Northern Iowa